Cycling for a World Free from Multiple Sclerosis: A VA Employee’s Challenge

I was at a crossroads on the country roads outside of Mt. Vernon, WA, riding my bicycle in the 2-day Bike MS: Deception Pass Classic. I could either turn left or right.  If I turned left, I could ride just 12 more miles and finish the 26-mile ride, saving my profoundly aching leg muscles from further fatigue from the previous day’s 59-mile ride, the furthest number of miles I had ridden in 8 years after a bad bicycle accident. If I turned right, I could ride the 52-mile route, claiming a total of 101 miles over two days of cycling. I stood there looking down each road. Left or right?

I leaned over my handlebars feeling tired already after only riding 12 miles. I reflected on all the new inspiring friendships I had made during the event so far.  The more fit riders were conquering the more rigorous 97-mile route. I questioned my endurance and strength. Do I have the energy to make it 40 more miles? I thought of my team members from the Evergreen Neurocyclers.  I had joined their team since I didn’t have a team. Two of them were riding 97 miles today…again!  One person had gone home tired after riding 97 miles the day before, and two members were riding on the 26-mile route I had passed a few miles back. So, I stood there contemplating.

The Bike MS: Deception Pass Classic 2014 began on Friday night, September 12, 2014, on an exceptionally warm weekend. It would begin at the Skagit County Fairgrounds in Mt. Vernon, WA, a couple of hours’ drive north of Seattle. This is one of the National MS Society’s biggest events, along with the annual Walk MS event, with thousands of riders and various teams participating all across the country raising awareness for research and health services for people with MS. I was excited and amazed to be a part of this event. There were people of all ages, shapes, sizes and fitness levels, with and without MS. And various types of bicycles, from the standard road bike to the recumbent bike to a hand cycling bike.

It is a well-supported ride that I had decided to join only a couple of weeks ago. I was impressed with the number of well-known companies that sponsored teams, as well as various area hospitals and MS Centers. Various vendors also supported the ride with free food, power drinks and fun giveaways. The event is organized over two days with 3 different figure-eight routes of various mileages to choose from each day, ranging from an easier 22-mile route to a rigorous and hilly 97 miles. It would be one of the most scenic rides I have ever participated in, idyllic with rolling hills on country roads and the scenic Deception Pass to cross over through Washington State’s Skagit, Whatcom and Island Counties. As many as 2,000 riders ride along these scenic courses.

The best part of the routes is the rest stops set up every 10 miles. Those rest stops were welcoming with enthusiastic volunteers cheerleading as you ride in exhausted and eager to rest. Mountains of free food greeted us to satiate our tremendous hunger and thirst from riding. Fresh grapes and bananas, peanut butter and jelly sandwiches, power bars, and electrolyte drinks enticed us. It was a chance to recover for a while and regain strength enough for the next 10 miles. Also important were the “sag wagons” and motorcycle club escorts. Different motorcycle clubs volunteered to ride the routes and check on people. Sag wagons were there for people who couldn’t finish or needed a quick repair of their bicycle.

On Friday night, I drove from Seattle an hour and a half north to the Skagit County Fairgrounds in Mt. Vernon, WA. I was welcomed by volunteer parking attendants leading me to an amazing set-up of hundreds of individual tents and campers, portable showers and port-o-potties, team and vendor tents. The ride would start early Saturday morning at 7:00 a.m. I pitched my tent next to my new, very welcoming friend Jane (not her real name) and her husband. Jane, a petite woman in her 40’s, has relapsing remitting MS. She and her devoted husband lead of one of the largest bike teams called “The Biking Vikings.” Jane planned to ride 59 miles the first day and wasn’t sure if she could ride the second day. All would depend on if her MS symptoms would allow a second day of riding. I met Jane through a series of emails from a friend who has MS who was hoping to ride but couldn’t make it. I was the only one from my team camping at the fairgrounds, so agreed to meet Jane at her tent and hang out with her team to learn about the ride. 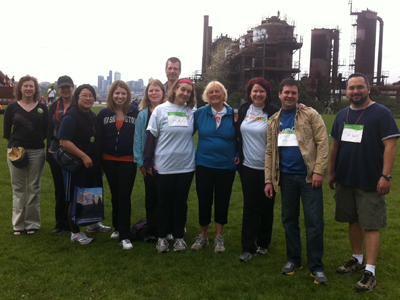 As I think back after that first day’s ride, I remember seeing Jane after finishing the 59-mile ride, slumped on a chair at her team tent in her bike clothes, as wiped out as the rest of us, with a huge smile on her face showing her satisfaction and success of finishing 59 miles. We high-fived our successful finish. Shortly after eating dinner, she gracefully declared her need for sleep and hoped she could get up again the next morning to ride 26 miles more. The fact that she wanted to ride the next day at all was amazing to me.

Then there was the founding member of the team “Lynn’s Legs” riding her scooter with a big smile and high spirits, cheering for us bicyclists from her team tent. MS had progressed enough to prevent her from riding a bicycle. Her team members decorated their fun and hard to miss team tent with banners of photos of past events, and various doll’s legs glued onto various surfaces. Their helmets were also decorated with doll’s legs sticking out. You couldn’t miss their team spirit or their helmets! Across from them was “The Biking Vikings” team tent. Their team tent was decorated with Viking memorabilia and strategically placed across from “Lynn’s Legs” tent. Their team shirts and helmets were decorated with…you guessed it…Viking horns! Some riders wore fake beards and long blond braids attached to their helmets. One rider wore an entire Viking costume! Some riders had both legs and horns on their helmets to signify their loyalty to both teams. Both tents were equipped with lots of food and drink, and greeted riders with the most team spirit I have ever seen. They claimed they had the best “party” tents. Comradery was also what this event was about which would keep us riding no matter how tired we got. I hung out with the Biking Vikings and soon found myself accepting a team t-shirt as an honorary member.

I also thought of the people with MS I had worked with at the VA in Seattle. One person told me about riding in the event the previous year with the “Lynn’s Legs” team and what an inspiring experience it was for her. But this year, profound fatigue and other MS symptoms prevented her from riding this year. She wished me luck riding and said I would have a lot of fun. I could see her encouraging face and hear her cheering words along with my new inspiring friends while I cycled up those tough hills.

Why did I decide to ride the Bike MS ride at all? I participated in the MS Walk almost every year. But, as a bicycle commuter, I felt like I could help support MS by riding my bike and overcome my own challenges with getting back on my bicycle after a serious bike accident 8 years ago. Back then, I was training for a Seattle to Portland two-day bike ride of over 200 miles. I unfortunately crashed an hour into the ride and woke up in an ambulance. So, I didn’t get to finish that ride. I experienced a concussion, a compression fracture in my back and other serious scrapes and bruises. I knew what profound fatigue, pain and even cognitive issues felt like similar to MS. But the difference is…I recovered. I had a second chance to overcome my injuries and get back on my bicycle. With MS, you may or may not get a second chance. You may or may not recover. You may have profound fatigue, pain, cognitive problems, and other MS symptoms for the rest of your life. You may have to conquer it daily. Millions of people are affected by MS and the challenges of living with its unpredictable symptoms affects people for a lifetime.

So, back at the crossroads. As a typical Seattleite, I spotted the coffee stand near my stopping point (yes! there was an espresso stand at that crossroads on the country road!) I walked with my bike over to the open window and ordered a double-shot espresso with sugar. The smiling barista asked how far I was riding. I found myself answering, “52 miles!” “Awesome!” responded the barista. Now, I couldn’t not ride the longer route after my declaration to the barista, and inspiration from “The Biking Vikings” and “Lynn’s Legs” and my study participants and Veterans with MS. So, I swallowed that sugary shot of espresso and hopped back on my bike, hoping the espresso would kick in soon, and started peddling!

It wasn’t so bad after I reached the next 10-mile rest stop. And then the next 10-mile stop after that. By the time I finished those 52 miles, I felt like I had spaghetti legs. As I crossed the finish line, I grabbed that lovely, shiny medal the cheerleaders hand to you at the finish line with all my strength. I did it! Amazingly, a second wind kicked in. I had enough energy to walk my bike to the Biking Vikings and Lynn’s Legs team tents. I gave congratulatory hugs to Jane, who did ride and finished 26 miles. I gave a final high-five to the founder of “Lynn’s Legs” who greeted me with a lovely big smile sitting on her bright red scooter and congratulated the rest of the new friends I had made. And, I managed to drive home back to Seattle, after another stop at a drive-thru espresso stand!