I was in the Coast Guard during much of the eighties and early nineties. Physical fitness, balance, and agility were important. In my late twenties, I began to experience coordination and sensory problems which, at the time, I thought must be age related as I neared the big 3 zero. I received a real shock in early 1994 when my doctor ordered neurological tests following a series of ankle sprains. After anxiously waiting a couple weeks, I was diagnosed with MS. It was somewhat of a relief to know.  Subsequently, I experienced some of the five stages of grief – denial, anger, bargaining, depression, and acceptance. The Coast Guard began proceedings to medically retire me. I was newly married. My first child was born two months after my diagnosis and my job was demanding. 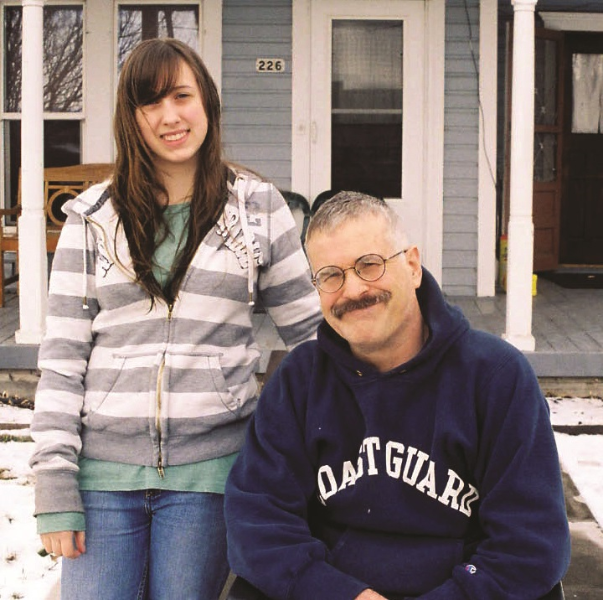 I was medically retired in 1996 and returned home to Oregon. I returned to Alaska in 2004. My MS has worsened steadily, most active in the spinal cord. I have tried Betaseron, mitoxantrone, Copaxone, mycophenolate, low dose naltrexone, as well as many vitamins and alternatives. Probably the most beneficial medical help has been a Medtronic Baclofen pump, which greatly reduces spasticity. Most important though, is the closeness to family and friends, which has developed because I have needed much more help from others than I ever thought I would at this point in life. Depending on others reveals so much human goodness that might otherwise never be seen. My parents and brother, my daughter Madeline, my sweetheart Lauren, as well as many friends and helpers show me this lesson every day.

I gave up driving in 2001 and started using a wheelchair fulltime in 2004. Both were tough on the pride but good risk management decisions. I have seen many elderly people stubbornly insist on driving past when it became unsafe. I quit when I was 40 and initially it was depressing. Ultimately, I was proud of myself for making a responsible decision. My first wheelchair outing occurred when my daughter and I went to the Oregon Museum of Science and Industry. She was about six years old and a lot of help. I used forearm crutches to get from the parking lot to the admission desk. She spied wheelchairs and insisted I use one. With her as a little motor we had a lot of fun although I can’t say the people we bumped did. After that I quit fighting the notion of using a wheelchair.

My activities have adapted as the MS has progressed. Early on, I was physically active and involved in a lot of community activities. I served on local committees and boards and even was Mayor of my hometown. Besides MS, the weather in Alaska encourages me to stay indoors. I do a lot on my computer. I find it liberating to pursue my own projects and truly think independently.

During the fifteen years since my diagnosis, I have relied on the Portland VA Medical Center despite moving to eastern Oregon and then back to Alaska. This is because I feel a personal connection to the people who provide my care and because of the VA’s close association and proximity to Oregon Health and Science University. I also believe that by combining visits to multiple clinics during one trip I probably save the government money.

Here Are Some Observations

Several people I know who were healthy when I was diagnosed have died from various causes since then. We absolutely do not know what is next in life so we need to make the most of our abilities and time.

There is no secret or miraculous cure just around the corner. Early on, I thought there had to be. I studied everything I could get my hands on, volunteered for and followed clinical trials. Most of these are lengthy and inconclusive. Information from the media or promoters of products tends to be overoptimistic at best.

My prescription for MS is to spend a lot of time with kids and animals and get plenty of sleep, fresh air, and sun. Avoid stress and stressful people (easier if you’re retired). Actively manage your medications by eliminating those that don’t help. Look out for the people you love by not expecting too much of them or letting them expect too much of themselves. You can always find a helper but family and friends come in a limited supply.