Competition Brings Out the Best in Me

I retired from the US Air Force after 20 years of service and sometimes I miss it. I enjoyed meeting new people, learning new things, seeing exciting places, and being challenged to be the best I could be. I left the military to spend more time with my young daughter and husband, but I never forgot the camaraderie I felt when I was surrounded by my fellow Veterans. 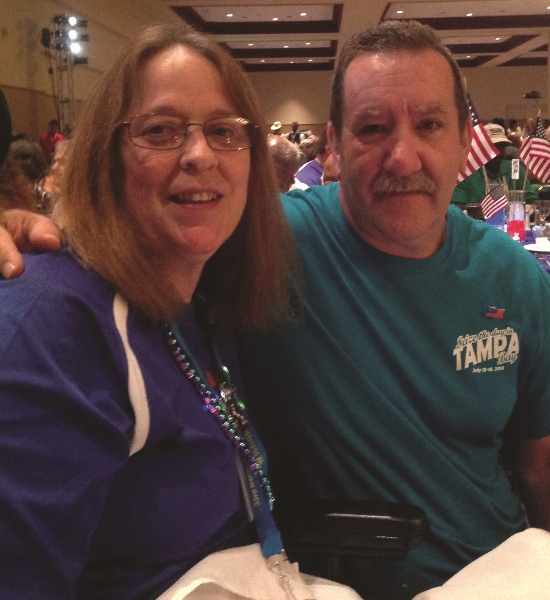 I experienced my first MS symptoms while in the military but wasn’t officially diagnosed until after my retirement. I had horrible pain in my feet and doctors removed several nerves from my feet to help alleviate the pain. Unfortunately, the surgery didn’t help and the pain persisted. I went back to the hospital a few times, but they couldn’t find anything wrong and told me it was in my head. I knew the pain wasn’t in my head but there was nothing I could do or say to convince them otherwise.

After my military retirement, I went to a civilian doctor to discuss the pain as it wasn’t getting better and I had a few other health issues that didn’t seem right. The doctor performed a spinal tap and MRI to see if he could find out what was wrong. The results from the procedures showed that I had MS. Although it was difficult to learn that I had MS, it was also a relief to know that what I was feeling and experiencing was not in my head. I didn’t like what was happening to my body, but to be able to put a name to it was a relief.

I was already retired when I discovered I had MS, so life didn’t really change much. I had been experiencing symptoms for years and was making adjustments as needed. I started attending an MS support group which allowed me to meet people who were going through the same things I was. To be able to talk to someone that could relate to what I was going through was very therapeutic. One of the support group attendees told me about the National Veterans Wheelchair Games and the more I learned about the Games the more I wanted to get involved. Sports have always been an important part of my life and to be able to continue participating in sporting events was very exciting.

I’m a member of the SE Paralyzed Veterans of America (PVA) team called “Wheels of Fire” and the first Games I competed in were in Spokane, WA in 2009. I also competed in the Games in Denver, CO, Pittsburgh, PA, and Tampa, FL and I plan to participate in all the future Games. I’ve competed in a variety of events and always try to compete in something new each year. I love stick bowling but golf is great too since you get to use an accessible golf cart and an accessible club allows you to remain in a sitting position. One year I competed in the kayaking event and it was amazing. There was no wind and the lake was like glass, allowing me to paddle the whole event myself. For the 2013 Games, I competed in bocce and won a bronze medal which was exciting. I also tried waterskiing on an accessible ski for the first time and had so much fun going around the lake I couldn’t stop smiling.

I feel like I get so much from participating in the Games, but I’m also able to give back which makes the whole experience even better. There are always attendees and volunteers at the Games who are newly diagnosed with MS. Sometimes it’s hard for people to talk about their disease and being around others who share the same symptoms and experiences is beneficial. As we spend the week together, I’m often able to help them better understand MS and realize that a diagnosis of MS doesn’t mean they have to change who they are or what they want to accomplish in life.

The Games are not about winning or even being good at sports, they are about coming together and being your best. I have MS, but I’m still able to do a lot of things and many of my limitations can be overcome with a little help and hard work. There are days that I don’t think I’m capable of something but that’s just human nature. We often create our own limitations before we even try something. Being part of the Games is an amazing experience that I hope to continue with for a very long time. I hope that more Veterans with MS get involved.