skip to page content
VA » Health Care » Multiple Sclerosis Centers of Excellence » Veterans » Veteran Stories » I Am Not My MS!

My journey with MS began 32 years ago. Like most people with MS, it took several years to finally receive a diagnosis; relapsing-remitting MS. Five years ago I was having pain in my legs and feet when walking and was falling daily. I had a surgery on my left knee and have not walked since that surgery. I began my life as a 'wheeler' on that day, going from relapsing-remitting to progressive MS. 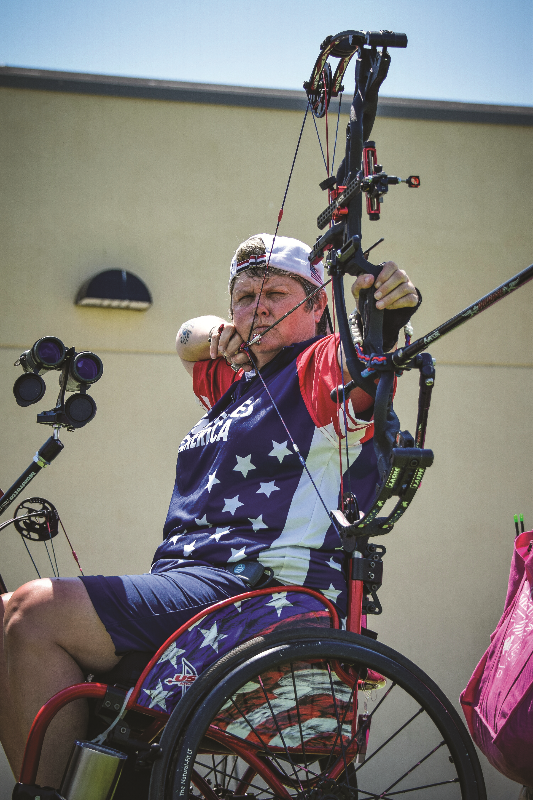 I was absolutely terrified when I was told that I now had secondary progressive MS. I was afraid to do anything that would make the disease progress faster than it already was. I was afraid to live because I was afraid of dying. It was a dark and horrible place to be. I was so depressed, I wished I would just die and be done.

In 2013, I attended the VA's National Veterans Summer Sports Clinic in San Diego, CA. That adaptive sports camp both changed and saved my life. The minute we came off that plane we were 'Adaptive Athletes'. I had thought of myself as a patient for many years. I didn't think a person with MS could even be an athlete.

The level of courage, bravery, and tenacity of the other athletes at the Summer Sports Clinic humbled and shamed me. Most of them were young people injured during their enlistments during the wars in Iraq and Afghanistan. Many were missing limbs or paralyzed, yet they laughed, talked smack, and competed with all their heart. It was at this camp that I met Randi Smith, the Paralympic Archery Coach, and I discovered archery. I had never shot a bow and found that I really liked it.

A year later, I was back at the Summer Sports Clinic. I roomed with Air Force Veteran, Samantha Tucker. Sam is a below the elbow amputee. We decided that we were going to make the USA Para Archery Team the following year. On January 1, 2015 we packed up our belongings and met in Colorado Springs, CO to train together. Seven months later, we were named to the USA Para Archery Team and the World Championship Team. I was 50 years old and Sam was 45.

In 2016, I became the 1st American woman in the W1 class (classification for the most significantly impaired archers) to be named to the USA Paralympic Archery Team. Although I didn't medal, my world ranking rose to #4 in the world. I am #1 in the USA. Sam also made the Paralympic Archery Team as the USA's 1st female compound archer.

My training and competition schedule is carefully structured around my needs and MS triggers. I found that working with a Strength and Conditioning Coach helps my fatigue and spasticity. My bowel/bladder program and wheelchair accessibility needs are carefully considered when traveling, especially internationally. Heat is a huge issue, both in training and competition, but we are learning and adjusting every day. The disease continues to progress and most recently the dexterity and strength in my hands has diminished. I am very careful with my nutritional planning and have lost 75 pounds in the last 3 years.

This journey has taught me that I am NOT my diagnosis. MS does not get to define me or determine what I will accomplish. I don't dwell on what the future holds for me anymore, it is what it is. MS is going to progress whether I sit around and wait for it or not. I believe that what I am doing is not even about me or archery, it is about stepping up and leading by example. There is no room for apathy in MS. Live life like you mean it. Don't just hand MS the win, fight for yourself! To learn more about me and my team, our Instagram is @USAParaArchery.