All Who Wonder Are Not Lost!

I enlisted in the US Navy Nurse Corp in 1970. Upon graduating from my nursing program, I was commissioned an Ensign and off to the Pensacola, FL Naval Hospital I went. I was assigned to the Emergency Room and it was the start of my career in Emergency Nursing; one I had dreamed of but hadn’t expected as such a new nurse. I enjoyed my time in the Navy; I learned much, got to travel and found I really liked warm weather! 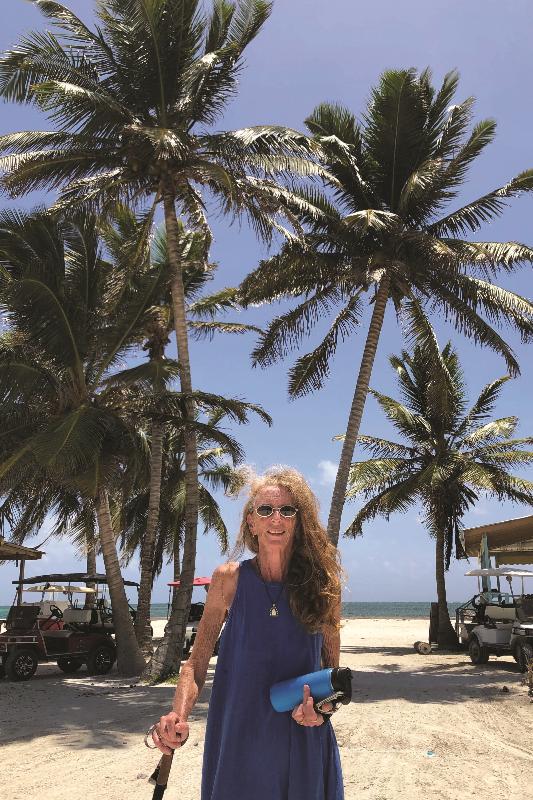 I returned to Oregon for a good job in 1973. I worked in busy Emergency Departments over the next 25 years, becoming one of the first Nationally Certified Emergency Nurses in Oregon. I always had strange physical symptoms while in the military and upon returning to Oregon, I decided to get them investigated. I was diagnosed with MS in 1987 but I continued to work and function well until 1992.

I had a severe attack in 1992 that changed my life tremendously; suddenly I was so weak that I was in a wheelchair. I needed to sell a home I had lived in for 14 years, give up two dogs, temporarily quit school and find a new place to live, all from a rehab unit. I spent ten years in that wheelchair, but it didn’t seem to stop me too much from pursuing things I was interested in.

I purchased, through a VA grant, a lift-adapted van and explored the Pacific NW and Canada with my son. I participated in the Paralyzed Veterans of America Wheelchair games, both winter and summer one year. Those games gave me confidence and self-esteem to continue with whatever I wanted to do in life, including completing a much-wanted bachelor’s degree in nursing in 1995.

I began to feel like something was missing in my life after about 7 years of wheelchair life. I retired from nursing in 2000 due to fatigue and cognitive changes that made me feel unsafe nursing. I wanted desperately to walk all the time, even if it meant using crutches or two canes. I met with a special physical trainer and he thought he could help me. The gym I joined was small, with a little pool and indoor running/walking track with a grab bar the whole way! After 3 years of 3 times a week training and swimming I could walk with crutches and eventually walking sticks. I felt free and wonderful.

In February 2007 I had another severe attack that again really changed my life. My MRIs showed a huge increase in lesion load and I was prescribed daily shots of Copaxone. I never in my life dreamed of daily injections but I learned quickly and adapted my travelling to accommodate keeping my daily meds chilled. I began to feel good from the Copaxone and my MS was stabilizing. My next obstacle in life was overcoming my loneliness. I hadn’t dated for over 10 years and I now felt my self-esteem was adequate to meet the challenges of the dating world.

I met Jerry, my husband, in spring 2007. I was thrilled to meet a man who could accept my illness. He read a lot, asked a lot of questions about my disease and began going to every doctor appointment with me to find out as much as he could. Jerry had travelled all over the globe for work and had a wanderlust for travel like I did. He also had a passion for gardening, rock hounding and dogs. We began travelling together in 2007 but after several years, we both realized it was getting harder to do. When Jerry suggested we find a permanent winter home somewhere warm, I was on board.

In 2012 we discovered a retirement development in southern Belize. We loved the amenities which included a pool, horses, beach, private island and much more. We invested in a lot and began planning an accessible home. We completed our home in 2014 and began spending winters in Belize, returning to Oregon every 6 months for my health care needs.

In 2016 we sold our Oregon home as it was becoming too much work to handle two homes and gardens. We now spend 10 out of 12 months in Belize, returning to Oregon once a year for health care needs. I communicate with my VA health care team via secure messaging or phone. I have an emergency internist and neurologist should I need it here in Belize, and we subscribe to med-jet in case of emergency conditions. I feel confident in my own self-care and realize it is my responsibility to take good care of myself so I can continue living the quality of life I require to make me happy.

While in Belize I garden, swim, walk our dog, occasionally horseback ride, snorkel, kayak, boat, fish and much more. I have discovered I have a green thumb for growing orchids. We have travelled to many Mayan ruins including Tikal in Guatemala. We are able to afford weekly housekeeping staff and a gardener to help both of us out. We eat very healthy food and I have access to physical therapy, acupuncture and massage which I take advantage of. Despite now being secondary progressive and off all DMTs (~3 years), I feel that I am doing very well.

My life adventures and travel are not done. We are currently planning a trip to Paris, Barcelona and Italy in September 2019. I do believe that “all who wander are not lost.”