Kimberly P. McLeod - Office of Small & Disadvantaged Business Utilization
skip to page content
Attention A T users. To access the combo box on this page please perform the following steps. 1. Press the alt key and then the down arrow. 2. Use the up and down arrows to navigate this combo box. 3. Press enter on the item you wish to view. This will take you to the page listed.
Menu
Menu

Leading our mission of enable Veterans to gain access to economic opportunity by leveraging the federal procurement system and expanding participation of procurement-ready small businesses. 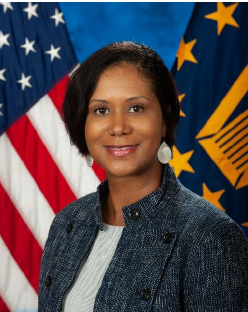 Ms. McLeod comes to the Office of Small and Disadvantaged Business Utilization from the Board of Veterans Appeals, where she has served the last two years as Deputy Vice Chairman. In that position, Ms. McLeod was an active member of the Board’s top management team supervising a team of 25 Veterans Law Judges, five Supervisory Senior Counsel and 49 administrative personnel, and was engaged in all aspects of executive leadership.

Prior to serving as a Deputy Vice Chairman for the Board, Ms. McLeod served as Executive Director of VA’s Office of Labor Management Relations where she led the Department’s labor relations program and established national labor relations policy and guidance. In that role, she served as the senior labor advisor for the Office of the Secretary and the Assistant Secretary of Human Resources and Administration. Ms. McLeod supervised a team that negotiated all national mid-term as well as master collective bargaining agreements on behalf of the Department. Ms. McLeod also served as the Co-Chair of the Department’s Labor-Management Group, which was the Department’s monthly communication vehicle between VA and all five of the national union presidents, who jointly represented approximately 290,000 VA employees.

Prior to her role as Executive Director of the Department’s Office of Labor Management Relations, Ms. McLeod served as Associate Chief Counsel in VA’s Office of General Counsel, a Senior Leader position where she was the VA’s national expert on labor and employment matters, including senior executive personnel, whistleblower retaliation, the Vacancies Act and labor related legislation.

Ms. McLeod holds a Bachelor of Arts degree from Howard University and a Juris Doctor from University of Maryland Francis King Carey School of Law.

Can't find what you're looking for? Use the site map »

Tweets by VAVetBiz
For advice on potential procurement opportunities in your area, contact your local
VA Small Business Liaison