Infectious diseases are disorders caused by microorganisms such as bacteria, viruses, fungi, or parasites. Microorganisms that cause disease are collectively caused pathogens.

While many organisms live in and on humans, and are normally harmless or even helpful, some can cause disease under certain conditions. They do so either by disrupting the body's normal processes or by stimulating the immune system to produce a defensive response, resulting in high fever, inflammation, and other symptoms.

Some infectious diseases can be passed from person to person through contact with bodily fluids, coughing, sneezing, and other methods. Others are transmitted from insect or animal bites, or by ingesting contaminated food or water or other environmental exposures.  Learn more. 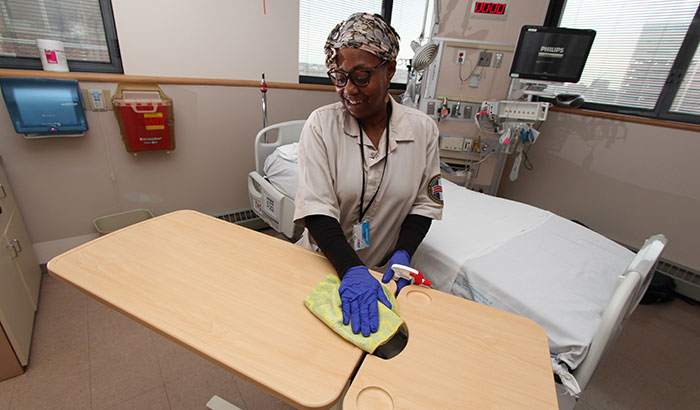 VA-CDC collaborate to ramp up fight against infectious diseases

Dr. Nasia Safdar has long been interested in finding ways to reduce the spread of infectious diseases. The epidemiologist is confident that many health care infections can be prevented by staff and patients adhering to basic practices, such as proper personal hygiene, and keeping the workplace clean.

Now, Safdar is the lead investigator on one of her most ambitious studies. It’s aimed at developing a solid plan for VA facilities to prevent the spread of dangerous pathogens, such as bacteria, fungi, viruses, and parasites, with a focus on cleaning patient rooms. All of those pathogens can cause infectious diseases.

"We want the cleanest environment possible. We want to give the fewest number of antibiotics possible."