VA Researching for You

The Centers for Disease Control and Prevention (CDC) define a traumatic brain injury (TBI) as “a disruption in the normal function of the brain that can be caused by a bump, blow, or jolt to the head, or penetrating head injury." In addition, service members and Veterans potentially have the additional exposures to blast, both from combat and from training.

After a TBI and depending on the severity, the person may experience a change in consciousness that can range from becoming dazed and confused to loss of consciousness. The person may also have a loss of memory for the time immediately before or after the event that caused the injury.

Due to improved diagnostics and increased vigilance, the Department of Defense (DOD) estimates that 22 percent of all combat casualties from Iraq and Afghanistan are brain injuries, compared with 12 percent of Vietnam-related combat casualties. TBI and its associated co-morbidities are a significant cause of disability outside of military settings, most often as the result of assaults, falls, automobile accidents, or sports injuries.

• 2008: Established a Brain Bank to collect and study post-mortem human brain and spinal cord tissue to better understand the effects of trauma on the human nervous system
• 2012: Discovered chronic traumatic encephalopathy, a degenerative disease linked to repeated head traumas such as concussion, in the brains of four Veterans after their deaths
• 2013:
o Along with the Department of Defense, funded two research consortia to improve treatment for PTSD and mTBI: the Consortium to Alleviate PTSD and Chronic Effects of Neurotrauma Consortium
o Showed that, in mice, an artificial communication link inserted in the brain can restore functions lost as a result of TBI 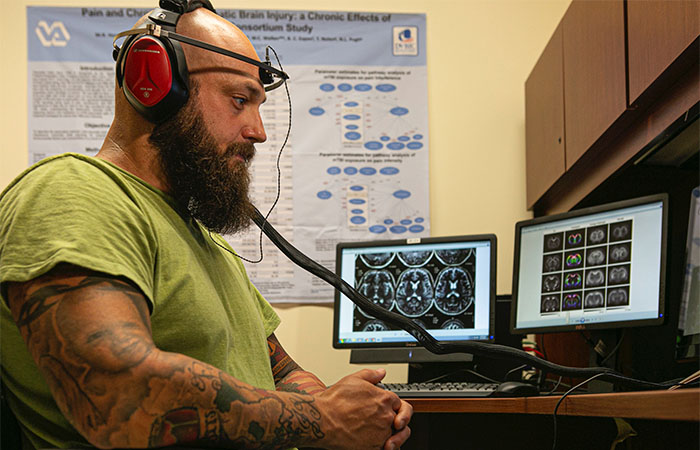 Army Veteran Joe Montanari suffered a traumatic brain injury while serving in Iraq. In addition to working as the military coordinator for the CENC and LIMBIC grants, he also participates in the studies. (Photo courtesy of Virginia Commonwealth University)

For Army Veteran Joseph Montanari, every day presents its set of challenges.

Like many other Veterans and Service members from the post-9-11 conflicts in Iraq and Afghanistan, Montanari is battling the aftereffects of concussions he experienced in the military—one in Iraq in 2004 and the other one in Kosovo in 1999.  He struggles with balance issues and constant headaches.

“It took a while to adapt once I got back from deployment,” he says. “Just coping is the main thing. Just being able to know what’s going on.”

Montanari is in an ambitious project that is seeking answers. He’s participating in the Long-term Impact of Military Relevant Brain Injury Consortium (LIMBIC), the world’s largest research cohort of Veterans and Service members that is dedicated to the study of mild traumatic brain injury (mild TBI), also known as a concussion. Most TBI injuries are considered mild. But even mild cases can involve headaches and long-term effects on thinking ability, memory, balance, sleep, mood, and focus.  Read more..