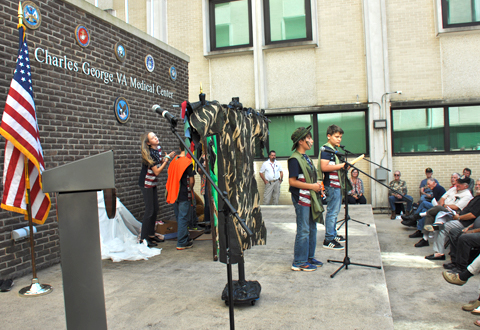 Living among us are an estimated 250,000 Vietnam Veterans whose lives have in many ways been defined by PTSD from combat.  Untold numbers carry less obvious emotional, mental or moral wounds. They were changed forever by their service to our country as young men. Many of these men are needing to come to terms with and reconcile what they’ve buried inside for 50 some years. They are in increasing numbers and are finally ready to talk about what they’ve carried, its impact on them and their families.

VA mental health professionals work tirelessly in attempting to meet the needs of the Veterans they serve. Individual and group therapy provide meaningful, often life sustaining support. Medications can help control symptoms; however, there often remains a need for deeper exploration of the wounds still carried. Veterans can benefit from additional programs and resources to restore a sense of hope and humanity that can catalyze a self-guided journey to healing, including therapeutic writing programs.

Writing programs for Veterans have existed since WWII. They help Veterans make sense of their military experience and honor the voices calling out to be heard. Written expression often helps organize one's thoughts and in so, writing helps to lift the weight and burden of painful experiences.  As Ron Capps of The Veterans Writing Project says, “Either you control the memory or the memory controls you.”

Writing programs focused on the narrative set in a supportive, non-judgmental environment can restore a sense of pride, build new camaraderie, nurture creativity, and help Veterans find the path to a better tomorrow. The painful memories and regrets can become a less constant daily companion with continued honesty, writing, and community.

A creative writing program at the Charles George VA Medical Center in Asheville, NC has helped Vietnam Veterans with PTSD do just this. In the Veterans' own words:

These men have become empowered enough to hold staged readings of their work at Asheville Community Theater and Appalachian State University. Recently, they provided select readings at UNC-Asheville, Memorial and Veterans Days ceremonies, VA and state meetings, and a host of public functions. These have served as the beginning of a welcome home our Vietnam Veterans never received. The St. Andrews Press has published a chapbook of the staged reading-- Brothers Like These is their all-time best seller.

When asked about his experience, one Veteran stated, “This group instantly became a brotherhood who understood the horrors, fears and loneliness of war. The publishing of Brothers Like These gave us a sense of pride and meaning.”

One of the Veterans, Stephen Henderson, drives a bus for Fairview Elementary School.  Children there participate in an outreach project, “Destination Imagination” (DI).  Fourth and fifth graders interviewed Mr. Henderson about his experiences in Vietnam.  They were shocked to find that our Vietnam Veterans were treated so badly when they returned home. The students were so touched by what they learned that they chose this theme for their DI project.

Stephen’s writings, set in the 60’s Appalachian Mountains were the basis for their inspirational play. Other of the men’s writings contributed to the skit, “The Day Before I Left Home.” They performed in front of the student body including teachers and parents, and then won the statewide competition. They performed in front of 17,000 people at the Global Competition winning the “Torchbearer Award” given for the performance that best brought a light to an issue that has for too long ‘been in the shadows’.

Their short play, as did the men’s readings, have had a powerful impact on their audiences, touching hearts, bringing tears, and forever changing the way those who heard them think about Vietnam Veterans.

They closed the year’s work with a performance at the Charles George VA Medical Center with an audience that included almost all the 30 men who’ve participated in the writing program to date. The respect and admiration that the Veterans and children felt for each other was palpable, and brought a torch to the power of intergenerational dialogue and healing.

Reflecting on the program’s success, Dr. Kelly has said, “Though we didn’t see their courage in country, we did see it in Classroom B as they faced their regrets, losses, fears and in some cases, demons.  Through their remarkable writing, and as importantly, with each other’s support, they’ve all found a way through the healing portal.”

Mr. Bathanti added, “They started out as sheepish, reluctant writers, but are now authors and statesman who understand the enormous importance of writing programs for Veterans and the influence they now wield. These brothers have been evangelized and are now doing the evangelizing. It's clear this work changes lives. They are eye-witness crucibles of change that’s been nothing short of miraculous – and I am not trafficking in hyperbole. I use the word miraculous very intentionally.”

Brother’s Like These has not only impacted the lives of these men but those of their families and friends, and now, thanks to the gift from these children and their teachers, multiple generations. Let’s hope the ripples seen and unseen are only just beginning in bringing healing to Vietnam Veterans everywhere, and to us all.