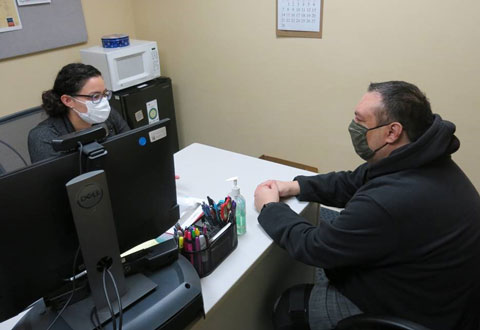 Combat Veterans are known for their ability to respond quickly and decisively, but Army Veteran, Ricardo Martinez found himself facing an internal threat that required a Whole Health approach to attack the enemy of Post-Traumatic Stress Disorder (PTSD).

For more than a year, the Iraqi War Veteran isolated himself; and during that time he lost six people he cared about to COVID-19. “Everything got pushed down,” said Martinez, who served in the Army for six years, including time serving in the 82nd Airborne Division. Even trips to the park with his young daughter were off the table, as Martinez struggled to manage his condition on his own. Depression was ruining Martinez’s life, and he knew it.

Studies have shown that male Veterans with PTSD are more likely to report marital or relationship problems, higher levels of parenting problems, and generally poorer family adjustment than Veterans without PTSD. VA offers the kind of treatment and support that can bridge the gap between isolation and living a full life.

Finally, his fears of losing his wife and daughter prompted him to seek help at the Lovell Federal Health Care Center (FHCC) in North Chicago, Illinois for treatment of his PTSD.

For Martinez, this was the fourth time he entered the PTSD program, but this time he knew he would do whatever it took to heal. This time around, he was supported by Whole Health Coach, Rossyvette Harrington, and he quickly recognized it could make the difference. “Whole Health is lifting me up,” Martinez said. “Before, I just kept quitting. Whole Health gives me more resources. All you have to do is ask. You think there’s no one there to listen, but there is.”

“I’m open-minded,” Martinez said several weeks after he started his treatment and embraced the Whole Health approach. “Let’s try this. It’s up to me to see what I want to work on first, and I like that you go at your own pace.”

Lovell FHCC is the first and only fully integrated Department of Veterans Affairs and Department of Defense (Navy) health care facility, serving military patients and their families, and Veterans in Southeast Wisconsin and Northeast Illinois. It has implemented the Whole Health system across the hospital.

Whole Health is a proactive approach to health care which equips, empowers and treats Veterans; allowing them to discover what matters most in their lives. “What I find most fulfilling about the Whole Health approach to care and Whole Health Coaching is offering patients the opportunity to tell their story,” Harrington said. “When our patients feel heard, they are empowered to take charge of their health and begin working towards wellness.”

Martinez used the Live Whole Health App to complete a Personal Health Inventory (PHI), a primary tool in Whole Health which offers the Veteran guidance to determine what’s important to you and what you want your health for. To fully understand what he wanted his health for, he worked on formulating his Mission, Aspiration and Purpose (MAP) and keeps that in the forefront of his mind. Martinez’s goal, the reason he wants his health, is to be a “better person, father, son, brother and husband.”

Of eight components of health and well-being, Martinez decided to first focus on the “power of the mind.” He practices exercises to help him relax, let go of his anxiety and pay attention to his heart rate and breathing. This, in turn, has helped him control his blood pressure. He started practicing meditation and mindful thinking several times a day using tools he can access through the Live Whole Health app on his phone.

Martinez has also been dealing with chronic pain from an accident that occurred while he was on active duty; and he plans to use Whole Health resources to learn about pain management and “ease off” some of his pain medications.

Martinez is reminded of his MAP every time his lock screen pops up on his phone and he sees the picture of his daughter hugging him and smiling at her first Chicago Cubs baseball game. The photo was taken the summer before he left home to get treatment and “it was one of my best days,” he said. “You always see the picture. It’s always a motivation.”

He says his ideal future is simple. “It’s being alive,” he said. “I want to see my daughter walk down the aisle.”

For a combat Veteran who served in the 82nd Airborne Division, seeking help was “a feat in itself,” Martinez said. Attacking the enemy of PTSD and isolation has been one of the most successful battles of Martinez’s life, and he is grateful to have found this path for himself and his family.

“I want other Veterans to benefit,” he said. He can see himself in the future as a Whole Health peer facilitator, a role in the Whole Health system that allows Veterans to work with Veterans to create their own pathway to health and well-being.

For more information on Whole Health and how you can get started on your journey, visit www.va.gov/WHOLEHEALTH/index.asp.