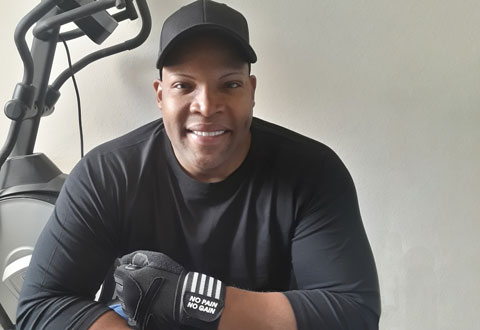 Being confident is something that is very important to Florida Veteran, Christopher Young. He joined the Marine Corps at 17 years old so he could be just like his father. “I saw his shiny boots and that camouflage uniform in the closet, and I wanted to be just like him,” says Young who was recruited in the high school cafeteria his junior year. “I remember my mother had to give permission for me to join. I signed my contract and was sworn into the Delayed Entry Program (DEP) around June 1990. By the time I graduated from high school and left for boot camp in June 1991, I had served 1 year of inactive reserve duty of the 4 years of the inactive reserve duty that was required.” Young served from 1991 to 1995 and spent his time in service at the Marine Corps Air Station Beaufort, South Carolina where he was on the Marine Corps boxing team.

Following his time in service, Young earned a bachelor’s degree in Business Management and Economics from the University of North Florida and worked in the financial investment field until migraines and other health issues brought on immobility for about 10 years. “I did nothing physical other than walking to and from my car since 2008,” Young says. “My neck was out of whack, I had a torn rotator cuff, and I could barely move.”

As a patient of the Orlando VA Medical Center, he started to receive Botox injections for his migraines in 2015 and was referred for acupuncture in 2019. “After my second round of acupuncture in 2020, I felt the best I had felt physically in years,” says Young. “I was finally loose enough to start doing something physically.”

In his younger years he had played football and soccer, ran track and was a boxer. Spending all those years not being able to move had a major effect on his self-image. “It messes with your spirit,” he said. “I know what good shape is and I knew I wasn’t in good shape.”

When he wanted to continue for a third round of acupuncture, he was told that he would be expected to enroll for Whole Health services along with the acupuncture. “When I got the call from Whole Health, it started me in the direction I wanted to go,” he says.

Working with certified Whole Health Coach Khenitha Reeves put Young on the path to continuing to achieve his goals. “She asks a lot of questions and really makes you think,” he says. Young says Reeves has been a joy to work with since he started working with her in July 2020 and he shows her that he is making an investment in himself.

He has lost 23 pounds and has kept it off by focusing on healthy eating and getting exercise. In addition to the visible changes, Young watches his lab results, and the last tests he had in December he saw overall improvement in all measures.

“And this is not a measurable goal, but I just feel happy to be alive and I feel much more outgoing now,” he says.

Khenitha Reeves is a Certified Whole Health Coach at the Orlando VA Medical Center. She has more than 100 appointments with Veterans a month to help them set and attain goals that matter to them. “I have been coaching with Veterans for three years and they still inspire me every day,” she says. “I like to use my sister, Timanni Walker’s saying when I am working with them which is, ‘Be firm in what you value and flexible in how it manifests.’ This reminds them that, even if they are not going back to the way things used to be, they can still honor their values and live their best lives.”

VA has trained close to 2,000 staff to be Whole Health coaches across the VA Health Care System. Coaches work with Veterans one on one and sometimes in groups to help them in the following ways:

For more information on Whole Health and how you can get started on your journey, visit www.va.gov/WHOLEHEALTH/index.asp.