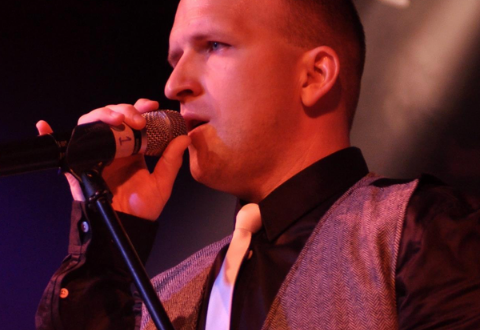 "There’s pale, and then there’s 365 days inside pandemic pale. My first day outside, I had to use sunscreen for newborns. I have the skin tone of an empty printer cartridge, and the Army says I’m now combat ineffective because I look like a white flag of truce," jokes Army Veteran David Yoder as he performs his comedy sketch on stage.

What is better for your health than making people laugh? Veteran, David Yoder brushed up his comedy skills at the Comedy Boot Camp offered for Veterans in Altoona, PA last fall and he agrees that laughter is great medicine.

The Comedy Boot Camp for Veterans was offered by ArtsAltoona, an arts and cultural organization that partners with the Altoona VA Medical Center, giving Veterans the opportunity to workshop standup routines and showcase their talents.

“Laughter allows us to take a step back and find the funny, and to not take ourselves too seriously,” said Amy Showalter, Whole Health Coordinator at the Altoona VA Medical Center. “It allows us to get outside of our minds and enjoy lightheartedness – which is an important practice for Veterans.”

The Comedy Boot Camp includes Veterans of diverse ages and backgrounds, all who share love of comedy and military service. For several weeks, Veterans work together to write and practice standup routines that they’ll perform during a showcase.

“This workshop gave Veterans in our area the opportunity to grow and step out of their comfort zone,” said Showalter. “Using humor as a form of expression can be vital when an individual is struggling to communicate thoughts and feelings.” Laughter is a strong force that can not only help Veterans heal from the trauma they experienced in active duty; but to also build connections with those around them in civilian life.

Yoder has been participating in Veteran arts programs in different parts of the country for several years. He says, “People underestimate the power that laughter has, and its ability to change the emotional atmosphere in profound ways.”

“Comedy really is an art form, and there are rules of craft to follow,” said Yoder. “It was great to see people who had never done this, take raw material, apply those rules, and create a performance that drew laughs.” While comedy helps build Veterans’ confidence and camaraderie among each other, Yoder also says it serves as a healthy release from stressors onset by the pandemic.

“[During my showcase] I riffed on the pandemic: paleness from living inside for a year, vitamin deficiency, vaccines, and turning Sheetz (convenience store) into my personal apartment.”

Personal Development is an important part of the Whole Health circle of health; and learning new skills is important to vitality. “Doing things that matter and bring us joy is very impactful to our health,” said Showalter. “Humor and laughter are one way that individuals can grow not only personally but professionally as well.”

Veterans say the best part about the Comedy Boot Camp is that you don’t have to be great at comedy to enjoy its benefits. Yoder explains: “If you have any interest in comedy at all, you should definitely apply. All comedy is welcome: physical, verbal, musical, etc. We haven’t decided yet on mimes.”