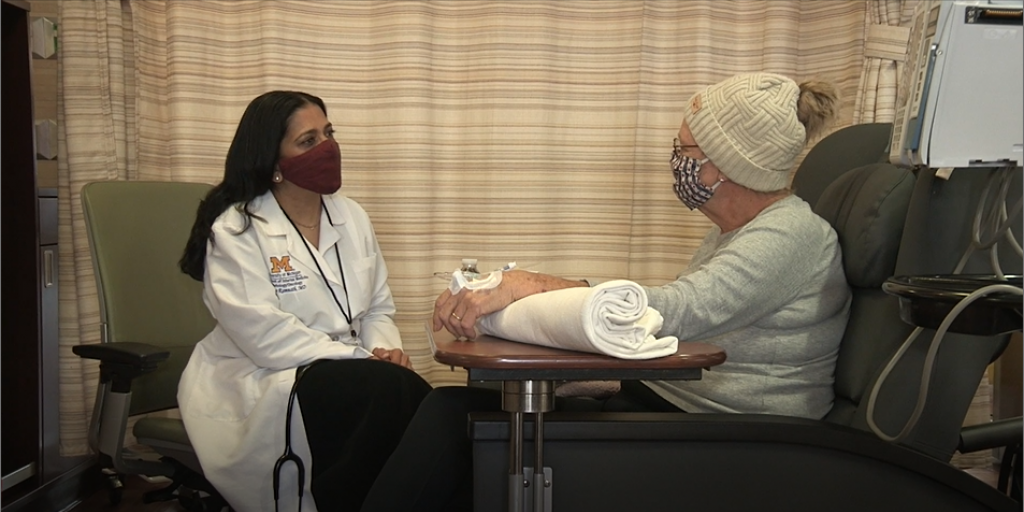 The VA Ann Arbor Healthcare System has been providing cancer care to Veterans in Michigan, Ohio, and Indiana for over 30 years. It was one of the first comprehensive cancer programs to be set up in the region.

Lung cancer is the second most common cancer among our nation’s Veterans. This cancer often goes unnoticed until its advanced stages, leading to just a 15% 5-year survival rate.

Veterans face unique challenges when it comes to lung cancer. For example, low screening rates, disparities between urban and rural healthcare, and specific exposures to chemicals during wars.

“Eighteen-percent of Veterans with cancer present with lung cancer. The problem is many of them are advanced, over 60%, so one of the goals is how can we identify earlier stage lung cancers,” said Dr. Nithya Ramnath.

“One of the impetus for the Lung Precision Oncology Program is how can we increase the number of Veterans screened for lung cancer,” said Dr. Ramnath. “And the second question was just like in prostate cancer, can we identify new molecular targets and or even existing molecular targets for which Veterans are eligible to either participate in clinical trials or improve their standard of care.”

Simply identifying and screening Veterans at increased risk for lung cancer is a challenge. Dr. Ramnath said there’s more than 1,000,000 Veterans at elevated risk of lung cancer, but less than 1% are being screened. In December 2020, VAAAHS’s Lung Precision Oncology program received a huge boost to addressing these issues in the form at a $4 million grant.

“One of the big things, especially with this LPOP grant that we got, and what we want to do, is to be able to have these Veterans stay closer to home but still be able to join a clinical trial if they want,” said Brittany Pannecouk, Oncology Research Program Manager.

Rural Veterans face more challenges receiving healthcare compared to their urban counterparts, mainly due to travel times and proximity to VA hospitals and clinics. Part of the $4 million grant directly addresses this issue, primarily through the VA Video Connect (VVC).

“The goal to do that is through our VVC telehealth to be able to talk to the patient on screen and discuss the trial with them. What would be involved, how many times, if, they would have to come to the VA of Ann Arbor be able to receive the care from the clinical trial,” Pannecouk continued.

While the current survival rate is much lower than Dr. Ramnath and her team would like to see, it’s a significant step forward from years’ past. The research the LPOP team is performing coupled with the funding they’ve recently received hopes to move that forward.

“Fifteen-percent at 5 years is what we have, but 20 years back it was 5% at 5 years. So, we might not realize, but it’s like small drops of water make a mighty ocean,” Dr. Ramnath said.

“As a physician, for me, it matters a lot to try and do my best, not only provide the best clinical care, but also encourage research, not only my research, but everyone whose working in this field because we all have a common goal of improving mortality from this cancer,” said Dr. Ramnath.