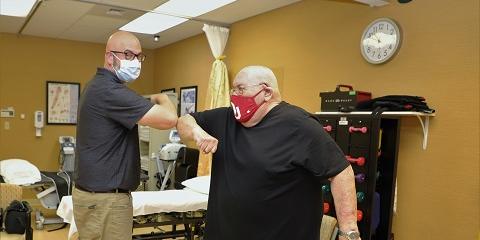 Butler VA Physical Therapist Scott Belden has 50 hats displayed in his office courtesy of Veteran patients throughout the past ten years.
June 21, 2021

At the Butler VA Health Care System, we honor our Veterans any way we can. One of those unique ways – a Veteran hat display at the Michael A. Marzano VA Clinic in Mercer County.

At the Butler VA Health Care System, we honor our Veterans any way we can. One of those unique ways – a Veteran hat display at the Michael A. Marzano VA Clinic in Mercer County.

About 10 years ago, Scott Belden began working at the Michael A. Marzano VA Clinic as a Physical Therapist. One of his patients, a WWII, Korea, and Vietnam Veteran had a special Army hat he always wore to his appointments. The two would banter back and forth every appointment about this hat and how Scott was going to ‘steal’ it because he liked it so much.

One day, the Veteran came to his appointment with a different hat, a simple USA hat he found on the side of the road coming in and gave it to him. Scott decided to hang it up in the office so everyone who came in for an appointment could see it.

As weeks and months passed, Scott told the story about this hat to his patients, and hats began to trickle in from other Veterans wanting to share a hat and a story.

Scott now has 50 hats displayed in the office, 17 of which are military hats. The rest vary from sports teams to colleges, to a mix-match. Those that bring them in can get pretty competitive (especially when it comes to sports).

“The really cool thing about this all – when I look at the hats, I see faces. Some of these Veterans, I really get to know,” shared Scott. “One of the guys I was evaluating during a first-time appointment just took the hat right off his head and gave it to me to display.”

Scott recalls another Veteran who shared his experience about a U.S. Marine Corps hat –

“I had a guy bring in an active duty Marine hat. Later on, I had a Korean War Vet come in and he says, ‘See how nice and crisp those creases are in the hat? I used to have to iron those when I was in the service! Now, they’re sewn that way.’”

Currently, a third of Scott’s office ceiling is covered in hats – and Veterans’ stories and experiences. While the first Veteran to provide his hat has since passed away, Scott knows he’d be truly honored to see what he started.


Veterans may come get their hat back at any time. And, none of the hats displayed are important heirlooms.