Staff Bios - Center for Minority Veterans (CMV)
skip to page content
Attention A T users. To access the combo box on this page please perform the following steps. 1. Press the alt key and then the down arrow. 2. Use the up and down arrows to navigate this combo box. 3. Press enter on the item you wish to view. This will take you to the page listed.
Menu
Menu 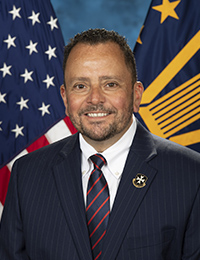 James Albino is the Director, Center for Minority Veterans. As Director, Mr. Albino serves as the principal advisor to the Secretary of Veterans Affairs on the adoption and implementation of policies and programs affecting Veterans who are minorities.

Mr. Albino, a Navy Veteran, previously served as Deputy Assistant Secretary for the Office of Intergovernmental Affairs (IGA) at the Department of Veterans Affairs (VA) until January 2017. In that role Mr. Albino was responsible for the oversight of two of the eight divisional directorates. Mr. Albino oversaw the office of primary responsibility for all relations between VA and international, state, county, municipal, and tribal governments.

Prior to joining the VA in September 2015, Mr. Albino served as Executive Director of the President’s Task Force on Puerto Rico in the White House. He initiated, led, and coordinated a White House supported Deputy Secretary level engagement that sought the commitment and resources of each Federal cabinet level leadership to improve the operations of Federal programs in Puerto Rico.

Ms. Debra Walker joined the Center for Minority Veterans in June 2022 as the Acting Deputy Director after serving in the Office of Enterprise Integration as Director for Enterprise Governance Management.

Prior to joining the Department in February 2004, Ms. Walker was the Organization and Public Affairs Officer for the City of Miramar, Florida, where she also held the positions of Assistant to the City Manager and City Clerk, beginning in May 1998.

Ms. Walker earned her undergraduate degree in Political Science from Presbyterian College and her master’s degree in Public Administration from the University of North Carolina at Chapel Hill. She also was a Senior Fellow at the Fletcher School of Law and Diplomacy and has a Certificate in Human Resources from George Mason University.

Carmen Drummond was assigned as a Senior Program Manager at the Center for Minority Veterans, U.S. Department of Veterans Affairs in May 2022. As the Minority Veterans Program Coordinators (MVPCs) Program Manager, she manages a cadre of 276 MVPCs located at VA facilities nationwide. MVPCs are VA employees who are appointed this collateral duty by the facility Directors throughout VA. MVPCs ensure targeted outreach activities are conducted nationwide for minority Veterans. Ms. Drummond provides guidance in identifying best practices, approaches and educational outreach opportunities which highlight and increase awareness of VA benefits to minority Veterans.

Carmen is an Army Veteran and a Qualified Inclusive Leader with a background in advancing diversity efforts with particular emphasis on Veteran services. She focused on seeking solutions to Veteran unemployment early on in her career since she too lacked a home or means of living after transitioning out of the military.

Ms. Drummond holds multiple degrees and certifications, including a graduate certificate from University of Southern Florida Muma College for Diversity, Equity and Inclusion as well as a Qualified Inclusive Leader Certification from the Human Resource Certification Institute (HRCI).

Working closely with vulnerable populations, Carmen has been an inspiration in her dedication to correcting workplace and social injustices. She adds value to the VA's mission by ensuring access, advocacy, and awareness for veteran issues through innovation and technology.

Before coming to the Department of Veterans Affairs, Mr. Sagudan worked for several healthcare organizations prior to joining the Center.  These agencies include:  Integrated Health Services, Inc., The American Red Cross, and HCIA-Sachs, and Kaiser Permanente Mid-Atlantic.  Mr. Sagudan is the son of retired United States Navy Vietnam Veteran, the nephew of Philippines Scout, and grandson was a World War II Filipino Veteran.  He has been an active member of several organizations in the Asian American/Pacific Islander community.

Mr. Sagudan has a Bachelors of Science degree in Health Science from Towson State University, and is working on his Graduate Certificate in Health Information Systems at George Mason University.

Prior to joining the Center, Mr. Campbell was a Health Insurance Specialist at the Centers for Medicare and Medicaid Services (CMS), U.S. Department of Health and Human Services.  Mr. Campbell served as CMS; Veterans outreach coordinator, the National Medicare Education Program coordinator and co-coordinator for the Advisory Panel on Medicare Education.  He was awarded the CMS Administrator Achievement Award for outstanding support during Medicare’s Part D first open enrollment campaign.

Mr. Campbell worked as a Staff Officer II in the Office of the Governor, Mississippi Division of Medicaid.  In this capacity he assisted the Deputy Executive Director for Administration in developing general Medicaid policies and guidelines that had significant statewide impact.  In addition, he served on active duty in the Army for nine years and is a Desert Storm Veteran.

D’Andrea “Dee” Jacobs, a Dallas native, joined the VA and Center for Minority Veterans (CMV) as a Program Support Assistant in May 2016.  She then accepted a position as Program Analyst – Hispanic Veterans Liaison in October 2017.  Prior to joining the Center, she served on active duty in the United States Air Force for 15 years.  She enlisted as a computer systems Program Manager and later cross-trained to become a Medical Laboratory Science technician.

She has received her Associate’s in Information Systems Management and Associate’s in Clinical Laboratory Science from the Community College of the Air Force in Montgomery, Alabama.  She has a Bachelor of Science in Social Sciences from University of Maryland Global Campus (UMGC) and is currently pursuing her Master of Business Administration at UMGC.  Her military decorations include: Air Force Commendation Medal, Air Force Achievement Medal with 2 Oak Leaf Clusters, National Defense Service Medal, Afghanistan Campaign Medal with 1 Service Star, Global War on Terrorism Service Medal, and the NATO Medal.

Mr. Gregorio E. O. Kishketon is a resident of Chevy Chase, Maryland, joined us from the Office of the Assistant Deputy Undersecretary for Health and Health Informatics (HIG) he also served on the DEI committee, He now serves as a Staff Advisor in the office of Secretary of the VA as the Native American/Alaskan Native Liaison (OSVA) at US Department of Veterans Affairs Central Office, Center for Minority Veterans (CMV) Gregorio has served as a MVPC in both the VHA and NCA and was the Guest Speaker for the MVPC meeting- Washington, DC.

Mr. Kishketon previously worked in, DC with the Dept. of the Interior, Bureau of Indian Affairs and Bureau of Indian Education for the Assistant Secretary for Indian Affairs (ASIA) and served as a Contracting Officer with the U.S. Dept. of Interior, Mr. Kishketon recently received with the office of the ADUSH, an award from the Dept. of Justice for “Improvement for IT for VA”. Mr. Kishketon has also worked for the NCA – National Cemetery Administration in the field and here at VACO. Mr. Kishketon has also worked in the field for North Texas Healthcare System (VANTHCS) and the VA Valley Coastal Bend Healthcare System (with VISN 17). Lastly, Mr. Kishketon has worked for several years for the US Postal Service in Management serving as a supervisor of delivery services and window services, Postmaster Leave replacement, Officer in Charge, Postal Operations Administrator and ODIS Cadre. He holds an Associate degree in Postal Management.

Mr. Kishketon served in the United States Marine Corps in several roles and was honorably discharged. He is a graduate of the University of Oklahoma (B.S), The University of Texas (M.S.), Oklahoma City Community College (A.S.) (Hall of Fame 2018) and Texas A&M University Weapons of Mass Destruction. The Dept. of Defense Contracting Officers School – Boston, MA. Mr. Kishketon received in 2015 the VA/NCA/DAV VA Employee of the Year/National Commanders Award. Mr. Kishketon has worked 25 years in the Federal Government, 5 years with a Non-Profit – The American Red Cross with the ARC he served as Emergency Management Liaison for Dallas County and Corporate trainer, and 12 years in the private sector as an Assistant Director and subsequently a director with Med-Net Inc.

Gregorio E. Kishketon is a Tribal Elder with the Water Clan – Kickapoo Tribe of Oklahoma. He also serves on the Board of Trustees for Saint Augustine University (HBCU). Board of Directors Alumni Association for Oklahoma City Community College. Board of Directors for Corrections (SPC).

Wilmya Hardy Morneau was assigned as a Data Analyst/Program Analyst to the VA’s Center for Minority Veterans (CMV) in June 2019. She joined the team following a special assignment as a Management Analyst to the MISSION Act working group. She collects, researches, and reports data on minority Veterans to include African American/Black Veterans, Hispanic Veterans, Asian American and other Pacific Islander Veterans, and American Indian and Alaska Native Veterans. Ms. Morneau also makes recommendations to the Director, CMV on minority Veteran policies.

Ms. Morneau first joined the VA in 2010 as an Emergency Manager responsible for alerting the Secretary, Veterans Affairs, to all emergencies from facility power outages, wildfire threats, or active shooter incidents. In 2013 she was chosen as part of a special investigative team reviewing documents regarding the abuse of conference funds. In 2015 she was selected as a Program Analyst to support 15 Congressionally appointed commissioners by leading working groups, directing conferences and providing research for the President’s Commission on Care. This Commission was responsible for making recommendations to the President on how to improve VHA looking forward 20 years. In 2017 she was the Executive Assistant to the Senior Advisor to the Secretary working on key projects that led to the development of the MISSION Act. Ms. Morneau also supported VHA’s Office of Policy and Planning before joining VHA’s Office of Human Capital Management on the Director’s Correspondence Team.

Ms. Morneau, armed with a Master’s Degree in Latin American Studies from Tulane University, served for 13 years as an Air Force Officer fighting the drug war and operating out of various Central and South American countries. Prior to coming to the federal government Ms. Morneau spent 15 years in the private sector as a Pharmaceutical Sales Representative (Pfizer and Sanofi) winning numerous national top sales awards. Currently, she is a long-time member of Rotary International and the Chair, VOACC Hope Center Advisory Board in Maryland.

Carl B. McPherson Jr. joined the Center for Minority Veterans (CMV) as a Program Support Assistant in March 2018.  Prior to joining the Center, Mr. McPherson was a warehouse supervisor for the Property Management Division at the Department of Veteran Affairs.  Mr. McPherson came to the VA after serving in the U.S. Air Force for 13 years, separating in 2008.  His military achievements include AF Outstanding Unit Award with 4 oak leaf clusters, Armed Forces Expeditionary medal, and a Global War on Terrorism medal.  He has received his Associate’s Degree in Business Administration from Northern Virginia Community College and is currently in pursuit of his Bachelor’s Degree.