Fisher House: a home for the holidays 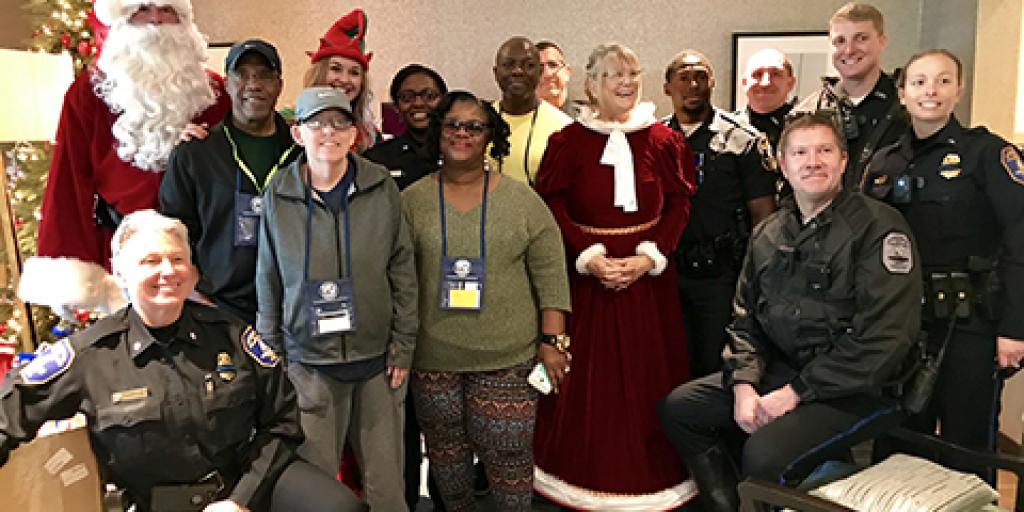 Santa, Mrs. Claus and the City of Charleston Police Department stand with Fisher House families during a special donation for Veterans.
By Erin Curran
December 20, 2019

A special visitor, courtesy of the Charleston Police Department, dropped by the Ralph H. Johnson VA Medical Center Fisher House on Dec. 18 with a motorcycle for a sleigh and squad cars full of gifts. It was Santa Claus himself!

Santa, Mrs. Claus, a cheery elf and nearly a dozen City of Charleston Police Officers unloaded boxes of gifts into the Fisher House. The gifts were distributed in the living room by the Christmas tree to Veterans and their families to ring in the season of giving.

“Today is an extension of our partnership with Fisher House,” said City of Charleston Police Chief Luther Reynolds. “This a great opportunity to help others and a small way to make a difference. We want Fisher House families to know that there are people that care out there.”

“Our job is to partner with organizations in the community that are doing good things and the Fisher House is doing that here in Charleston,” said Chief Reynolds.

One of the Veteran families that benefited from the donation was The Beesons. Veteran Travis Beeson, a former helicopter pilot in the United States Air Force, has been hospitalized at the Charleston VAMC since Oct. 23 and his wife Kim has been by his side every day.

Travis was scheduled for a hernia repair operation on Oct. 23 and the couple planned to stay for a few days of recovery at the medical center. Following the procedure, during a 7:00 a.m. routine check by hospital staff on Oct. 25, Travis had a stroke. The stroke was unrelated to the hernia repair.

“We are so fortunate that we were here when Travis had the stroke—right place at the right time” said Kim. “They took him right into surgery and he’s been under the best care ever since.”

What had originally been a few nights planned stay at the hospital quickly turned into months of ongoing treatment. After spending four nights in the hospital, Kim was connected with the Charleston Fisher House.

“It felt so good to sleep in a bed that first night,” said Kim. “It just slips out now that I call it home. Everybody there is just like family—all of us caring for our Vets. They are there for the tears, the support, for everything.”

Kim expressed just how important it is for her to be able to be by Travis’s side daily. A chance she might not have if it weren’t for the Fisher House.

“I’m just so thankful I can stay at the Fisher House just five minutes away from the him instead of one hour and ten minutes away,” said Kim, who lives with her husband in Walterboro, South Carolina. “I’m not leaving his side. I want to be here every day.”

Kim arrives at the hospital each day at 10 a.m. and stays with her husband until 5 p.m. She returns to the Fisher House to a warm meal provided generously by community volunteer groups. She even packs lunch from leftovers and other donated food items to bring with her to the hospital each day.

Thanks to the holiday donations from the City of Charleston Police Department, Kim and Travis now have two stockings stuffed with goodies and several wrapped packages to celebrate Christmas. Kim laughs as she reminds Travis that she’s not allowing him to open the presents until Christmas Day.

“It’s a blessing that these strangers are giving time out of their day to be with a family of different people staying under one roof,” said Kim. “They are giving us a chance to enjoy Christmas.”

This Christmas is certainly an emotional time for the Beesons. After the stroke, Kim was told her husband might not make it and 13 days later she was told to call in the family to say their goodbyes. But on day 14 after the stroke, Travis opened his eyes. The couple is eternally grateful for both the care at Charleston VAMC and the additional support they’re receiving at the Fisher House.

“Even though Travis isn’t staying at the Fisher House, they are taking care of him,” said Kim. “Fisher House made him special tea and sent a blanket for him. It’s the little thoughtful things that don’t have to be done. Ms. Vicki is doing those things out of the kindness of her heart.”

Vicki Johnson, Charleston VAMC Fisher House Manager, has been with the couple every step along the way.

“The guests that come to stay at Fisher House become part of our family, we treat them like we would want our own family members to be treated,” said Johnson. “Sometimes it’s the small things that let people know how much you care about them. “

The Beesons are still waiting to hear form doctors when they can go home, but Kim is hoping for some time in January. In the meantime, she’ll continue her stay at the Fisher House, a place she calls a “house of love.”