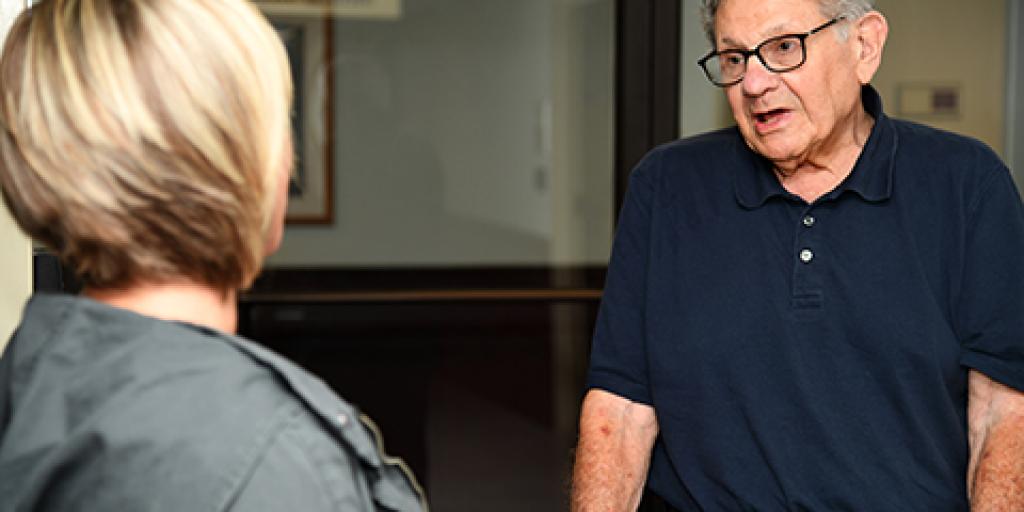 You can often find Peter Demos in the hallways on the fifth floor of Charleston VAMC where he helps maintain the facility’s cleanliness, while also checking-in on employees and asking them about their day during his daily rounds through offices. Photo by James Arrowood.
By Kristen LeMatty
July 23, 2018

Peter Demos, though most employees know him as “Pete”, is a housekeeper in the Environmental Management Service (EMS) at the Ralph H. Johnson VA Medical Center.

Pete has led a remarkable life. Shortly after graduating high school, including two years of ROTC, Pete joined the US Air Force (USAF), where he specialized in mechanics. Pete’s interest in the military began with his family’s service during WWII. Two weeks following his enlistment, Pete received a letter from Florida State University (FSU) offering him a full ride football scholarship. Along with his success in academics, Pete was a skilled offensive lineman.

“As a center, I never missed putting the ball in the guy’s hands,” said Pete.

Though he could not attend FSU due to his military enlistment, his scholarship offer is a testament to his incredible athletic and scholarly achievements.

Four years after enlisting, Pete received an honorable discharge. Pete joined the Honeywell Camera Company as the sales representative for the Southeastern Region of the US. Wanting to spend less time on the road and more time with his family, Pete moved to Charleston in 1965, where he opened the Demos Texaco Auto Center. In 1970, he sold his auto center and began his career in real estate. In 1975, Pete became the owner, real estate broker and property manager of Peter Demos Realty.

Pete describes himself as a “people person,” and rightfully so, as much of his career and success has resulted from his innate ability to connect with people.

October 2018 will be one year since he began his career at the Ralph H. Johnson VAMC. Pete joined the Charleston VA team because of how impressed he was with the medical center’s treatment of Veterans and his desire to give back. Pete enjoys the physical aspect of housekeeping and remains an athlete at heart. Above all, Pete enjoys the relationships he’s made by walking the facility each day and is a friendly face to many employees at the medical center. Pete’s demeanor is infectious, and chances are he already knows you by name.

“If I had gone to FSU, my life would be different. I wouldn’t be here.”