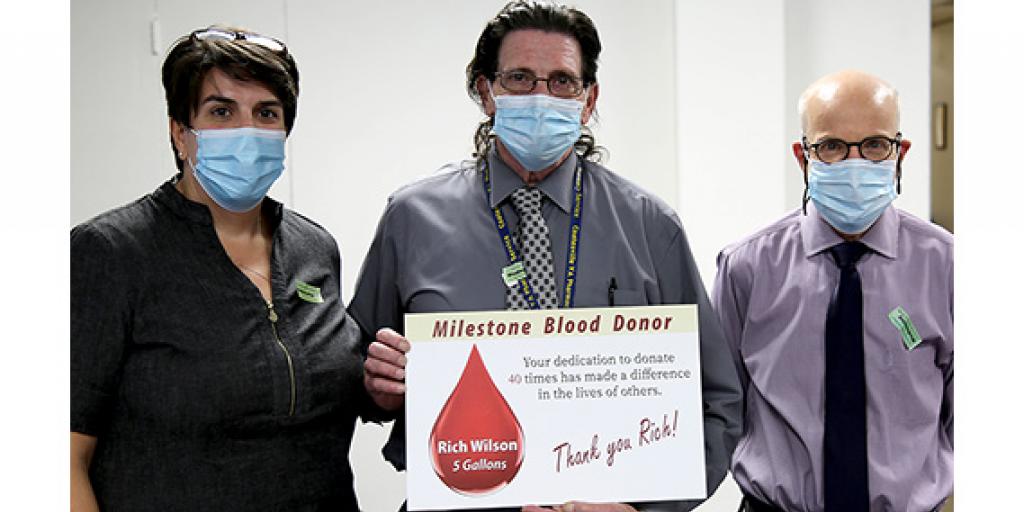 Rich Wilson (center), U.S. Navy Veteran and Supervisory Pharmacy Technician at Coatesville VA Medical Center poses for a photo. On either side of him are Dr. Michael Gliatto, Coatesville VAMC’s Chief of Staff (right) and Jennifer Lilly, Chief of the Center for Development and Community Engagement at Coatesville VAMC and the Blood Drive organizer.
September 23, 2021

A U.S. Navy Veteran employed at the VA showed up for a scheduled appointment with the Red Cross to donate blood at the Coatesville VA Medical Center as he has many times before.

A U.S. Navy Veteran employed at the VA showed up for a scheduled appointment with the Red Cross to donate blood at the Coatesville VA Medical Center as he has many times before.

The difference this time is the donation on this day means Richard Wilson, Supervisory Pharmacy Technician for Coatesville VAMC, has donated a total of five gallons, a Red Cross donation milestone, in what he estimates as 40 visits over more than 20 years.

Wilson served in the 3rd Marine Battalion from 1975 to 1979 as a Hospital Corpsman attached to the Marines. Wilson explains why he sees donating as important.

"I know how much that pint of blood can mean to someone who's suffering," said Wilson. Just knowing that I have the power with such a small donation to make such a big impact on a person. It's a no brainer."

Terri Heath, Phlebotomist for the Red Cross, is overseeing today's blood drive event where they are collecting donations which are headed back into the local community.

"[Donors] are very excited and often share their milestones with us and it's wonderful to see someone can give so much," said Heath. "Not everyone is eligible to give but the ones who can, [should know] we certainly do need it. Only 3% of eligible people actually donate blood."

Coatesville VAMC hosts blood drives four times per year and is organized by Jennifer Lilly, the Chief of the Center for Development and Community Engagement. She finds a location, announces the event, recruits and then schedules the donors.

"The Red Cross teams are a pleasure to work with," said Lilly. "Our employees always answer the call for those in need. Helping Rich celebrate his five-gallon milestone donation is a small gesture to thank him for his dedication to donating blood over so many years."

Wilson has no plans to stop donating after reaching this milestone.

"Hopefully, I can make it to 10 gallons. I encourage anyone who is physically able to donate to take the few minutes, take the pinch of pain and make an impact on someone's life."

After signing up through their website, Wilson receives regular emails from the Red Cross alerting him when there is a blood drive in the area. Anyone interested in donating can visit the Red Cross website or call 1-800-RED-CROSS.