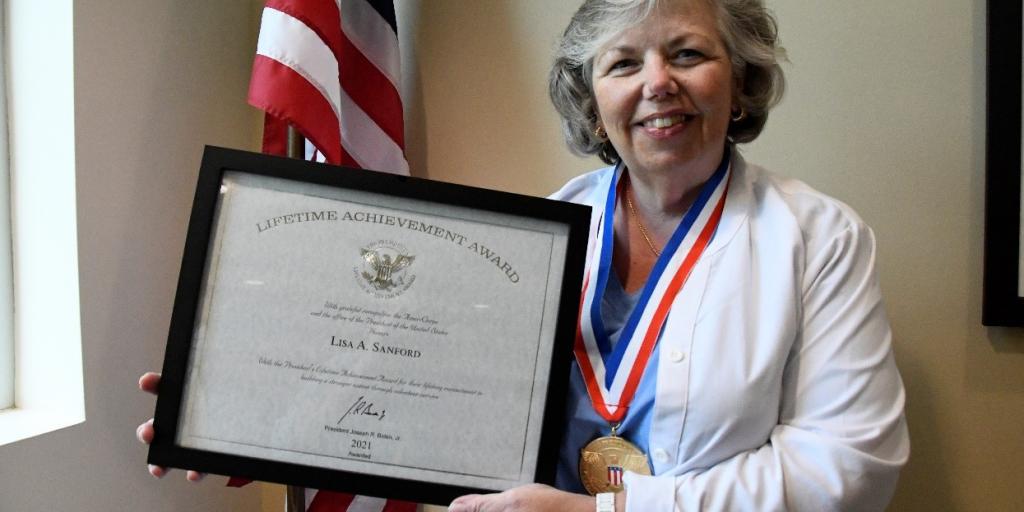 Lisa Sanford, a nurse practitioner, and primary care provider at the Clayton-East Raleigh VA Clinic, was recently awarded the President’s Volunteer Service Award (PVSA). The PVSA is the highest national award for volunteer achievement. Dr. Sanford by Dr. Kenneth Curry a local member of the clergy in Franklinton, North Carolina, submitted the nomination for the award.

The President’s Volunteer Service Award, established in 2003 by the President’s Council on Service and Civic Participation, recognizes the contributions of voluntary activities to the nation’s strength and national identity. The PVSA recognizes individuals whose service positively impacts their communities in hope of inspiring others to voluntary service.

For the past 30 years, Dr. Sanford has contributed her medical expertise to the well-being of Veterans. During the last 30 years, she has also volunteered her medical acuity and knowledge to people in Johnston County, North Carolina, and the surrounding communities.

During her time in Atlanta and Los Angles, Dr. Sanford met members of the Latino and Asian immigrant communities and became familiar with the issues that concern them. Seeing their struggles to integrate, she decided to help.

“I’ve been doing this since I was in college. I first started with Asian immigrants and refugees in the Atlanta area and continued from there” said Dr. Sanford.

Dr. Sanford’s volunteer efforts have been enhanced due to her fluency in Spanish. While a resident of California and during her time in North Carolina, she’s taught Latin American immigrants how to read and write in English. As an advocate for the Latin American community, she’s provided immunizations to disadvantaged Spanish-speaking communities, as well as healthy living classes for aging adults that struggled financially or were unable to acquire medical care.

“Any and all of the above,” says Dr. Sanford. “I always have something going when it comes to volunteering.”

Dr. Sanford’s volunteer activities and advocacy, got the attention of the local community, sparking gratitude from residents in North Carolina, eventually leading to the nomination for the PVSA. Dr. Kenneth Curry of New Horizons Christian Ministry is an Army Veteran and patient at the Clayton East-Raleigh VA Clinic. Dr. Curry was impressed by Dr. Sanford’s commitment towards the less fortunate members of her community. Being a past recipient of the PVSA, Dr. Curry decided to submit Dr. Sanford’s name for the prestigious award.

“My organization is a certifying agency for the President’s Volunteer Service Award, which authorizes us to nominate deserving individuals,” says Dr. Curry.  “There are so many unsung heroes out there, working to make their communities and this nation better. [Dr. Sanford] was one of those people.”

Dr. Sanford states that she is honored to be a recipient of the award, but quickly mentions that her goal is to help people, despite anyone recognizing her efforts.

“I’m incredibly humbled receiving this (award),” says Dr. Sanford.  “There’s always something you can do, big or small, to help someone in need.”