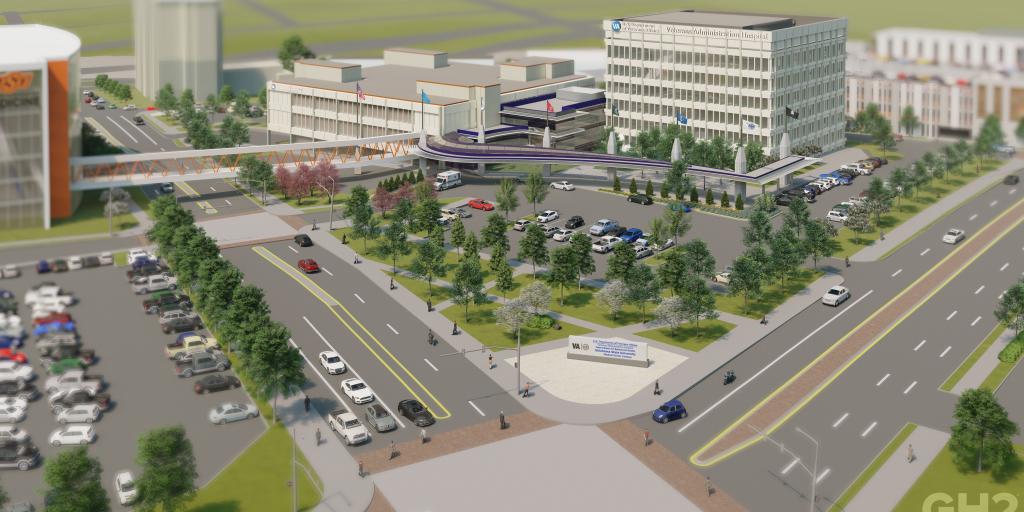 A rendering of the Veterans Hospital in Tulsa.
April 16, 2021

On Sunday, Dec. 27, 2020, the president signed a law approving $120 million in federal funding for a new Veterans Hospital in Tulsa (VHiT), which will be the first hospital to be built under the Communities Helping Invest through Property and Improvements Needed for Veterans Act of 2016 (CHIP-IN Act).

“We are extremely grateful for the strong support received from U.S. Senators James Inhofe and James Lankford along with U.S. Representatives Markwayne Mullin and Kevin Hern,” said Ralph Gigliotti, director of the VA Rocky Mountain Network. “Our VA team set a goal with the state of Oklahoma, city of Tulsa, the Anne & Henry Zarrow Foundation, and Oklahoma State University and we achieved it. I am so impressed with the collaboration in the name of America’s heroes. This is a huge win for Veterans of Eastern Oklahoma who deserve nothing less than the best possible care.”

Pete Peterson, chairman of the Oklahoma Veterans Council, offered the following praise for the project.

“The Oklahoma Veterans Council is pleased to see that the VA Hospital is included in the Mil-Con VA Appropriations Bill for FY 2021,” he said. “This hospital will not only provide exceptional service in the heart of our largest market it will also stand as a testament to what we can accomplish as a community when we work together for the benefit of our veterans.”

The VA hospital will be located in downtown Tulsa at 7th and Houston on the expanded OSU Medical Center Campus. The effort will convert the existing Kerr-Edmondson Buildings on the site into a modern 275,000 square-foot, 58-bed medical-surgical hospital for veterans.

More than two-thirds of the 47,000 veterans who receive services at the current Jack C. Montgomery Medical Center in Muskogee come from the Tulsa metro area. Of the 115,400-plus veterans in the Eastern Oklahoma VA area, approximately 68% are closer to Tulsa than to Muskogee, leading planners to estimate the new hospital could serve up to 30% (or 14,000) more veterans annually.

“The new VA hospital in Tulsa is a historic victory that will offer long lasting and far-reaching benefits for our Veterans, the VA, and our community,’ said Mark E. Morgan, MHA, FACHE , director, Eastern Oklahoma VA Health Care System. “By expanding services in Tulsa, EOVAHCS will be strategically positioned to provide the highest level of care to our Veterans for decades to come. This monumental expansion will also allow us to repurpose the Jack C. Montgomery VA Medical Center in Muskogee into a much-needed community living and behavioral health center with expanded services that are not currently offered in this area.”

The project, scheduled for completion in 2024, will have an estimated $130 million total cost of construction - $120 million federal appropriation and $10 million in philanthropic support.

The state of Oklahoma has finalized transfer of the Kerr-Edmondson property valued at $35 million, and the city of Tulsa has committed $8 million toward a parking garage for the veterans hospital.