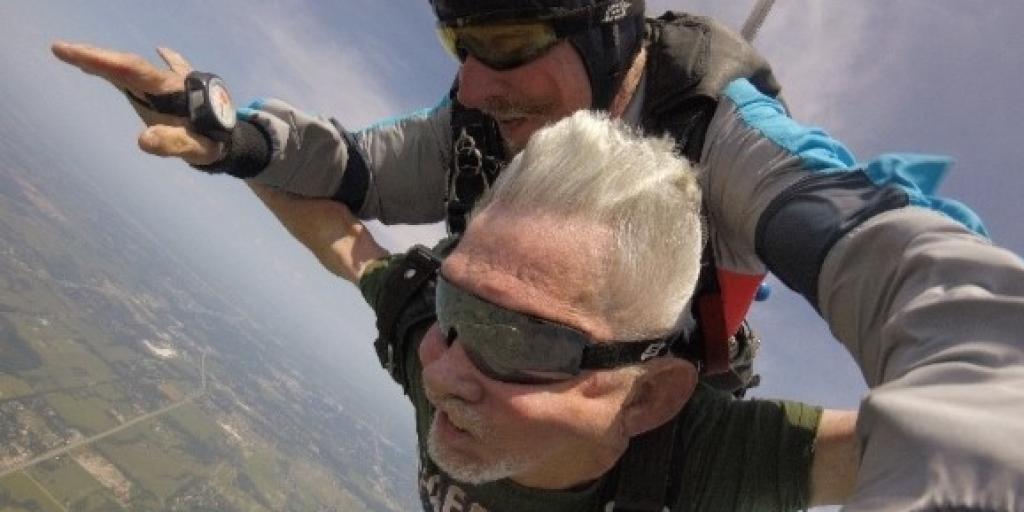 In 1958, 17 year-old Tom Cotton deployed to Korea with the U.S. Army's 13th Engineering Combat Battalion. The battalion's primary mission was finding mines left over from the Korean War and destroying them.

“When we got them marked, we’d put TNT charges on them and set them off,” said Cotton, who volunteered at the Jack C. Montgomery VA Medical Center from 2007 to 2020.

“When I went into the service, I wanted to be a paratrooper,” said Cotton, who has also been a patient at the Jack C. Montgomery VA Medical Center since 2002. “But I didn’t have the guts.”

Now 80 years old, Cotton has set his mind to tackling goals he was either afraid of or simply never got around to accomplishing.

Cotton and his wife of 50 years, Caroline, have traveled across the U.S. in recent years. Cotton never made studying his bible a priority, but he is now. He also bought a guitar last year and has been teaching himself to strike a chord.

Cotton only had one major thing left on his bucket list - jumping out of an airplane, something he was afraid to do at 17 years-old.

All it took was a push (not literally) from a fellow Veteran, Marcus Webb, who became friends with Cotton while he was working at the main information desk as a VA volunteer.

"I used to stop and talk to him when he worked as a volunteer," said Webb, Executive Assistant the Medical Center Director. "But he stopped volunteering due to COVID-19. Since then, I would try and catch him as he came in for appointments."

"A few months ago, he said 'I want to go skydiving.' I told him that if his wife and his doctors said it was okay, that I would go with him."

To say that Caroline wasn't fully on board with the plan, is putting it mildly. But she didn't stand in the way of her husband's goal.

"I was kind of leery of it," she said. "But he’s always wanted to do it. It was up to him. I just kept my fingers crossed and praying.”

On Sept. 4, Cotton and Webb boarded a Cessna 180 aircraft at Muskogee-Davis Regional Airport and did tandem jumps at 10,000 feet with professional skydivers.

"Somehow I worked up enough courage to do it."

Webb said it is inspiring to see a Korean Veteran still living life to its fullest.

“Seeing someone at his age living life and doing things he wants to do, I think that’s something to be said to us younger Veterans," said Webb. "He's not just talking about it, but actually getting out there and living life."

Now that Cotton's bucket list is complete, what's next?

“I’m going to have to replace it," said Cotton. "It was the bottom of the bucket list.”