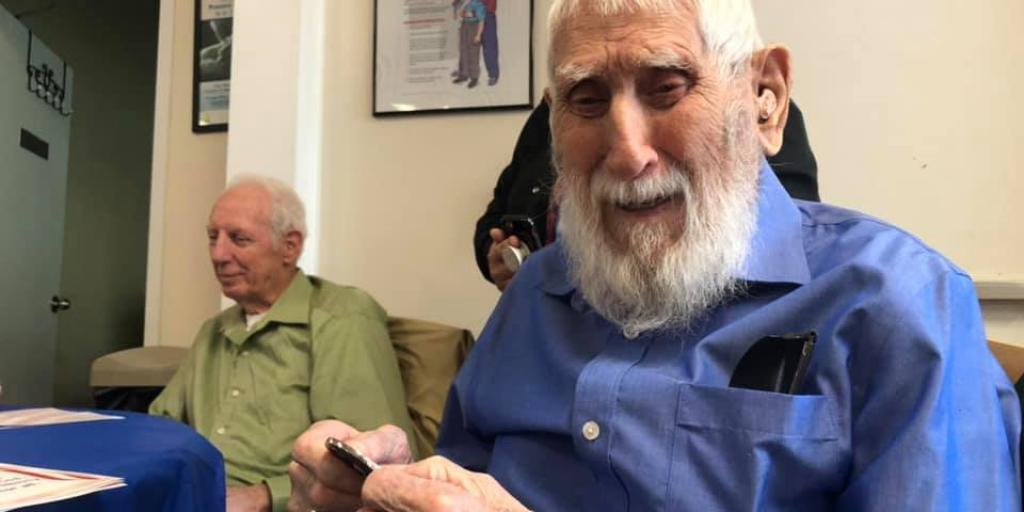 PENSACOLA, Fla. — Ninety-eight year-old Army Veteran Dayton Shell reacts after receiving a Gulf Coast Veterans Health Care System (GCVHCS) coin from GCVHCS Director Bryan C. Matthews during a Prisoner of War (POW)/Missing in Action (MIA) Recognition Day ceremony Sept. 17 at the Council on Aging of West Florida in Pensacola, Florida. Shell was held as a POW after his badly outnumbered unit was forced to surrender to German forces during the Battle of Hedgerows in 1944.
By Bruce Cummins, Public Affairs Specialist
September 23, 2021

"This is an event we at the Gulf Coast Veterans Health Care System recognize in all we do," Matthews said. "We’re committed to providing the best health care possible to those who have worn the cloth of our nation, and we honor all of these brave men and women."

Since 1979, POW/MIA Recognition Day is observed the third Friday in September, providing the opportunity as a nation to remember its responsibility to stand behind those who have served their country, and underscore the ongoing efforts to account for those who did not return.

The ceremony centered around Dayton Shell, a 98-year-old World War II U.S. Army Veteran who was held as a POW after his badly outnumbered unit was forced to surrender to German forces in France in 1944. Matthews recognized Shell during the ceremony.

"Mr. Shell, on behalf of the Gulf Coast Veterans Health Care System, I am honored to welcome you today," he said. "Your sacrifice has inspired generations of service men and women. Thank you for your service."

Shell, born and raised in Tilden, Nebraska, was drafted into the Army on March 2, 1943. Scarcely more than a year after that, he was on the beach in Normandy, France, during D-Day as a nineteen-year-old Soldier. After surviving that horrific battle, Shell continued with his unit toward Saint Lo, France, fighting in The Battle of the Hedgerows which took place between July 7 and 19, 1944. Saint-Lo had fallen to Germany in 1940, and, after the Invasion of Normandy, U.S. forces targeted the city as it served as a strategic crossroads.

The Gulf Coast Veterans Healthcare System (GCVHCS) is headquartered in Biloxi, Mississippi, and provides a variety of medical outpatient services to more than 77,000 Veterans and other beneficiaries at five locations in Mississippi, Alabama and Florida.