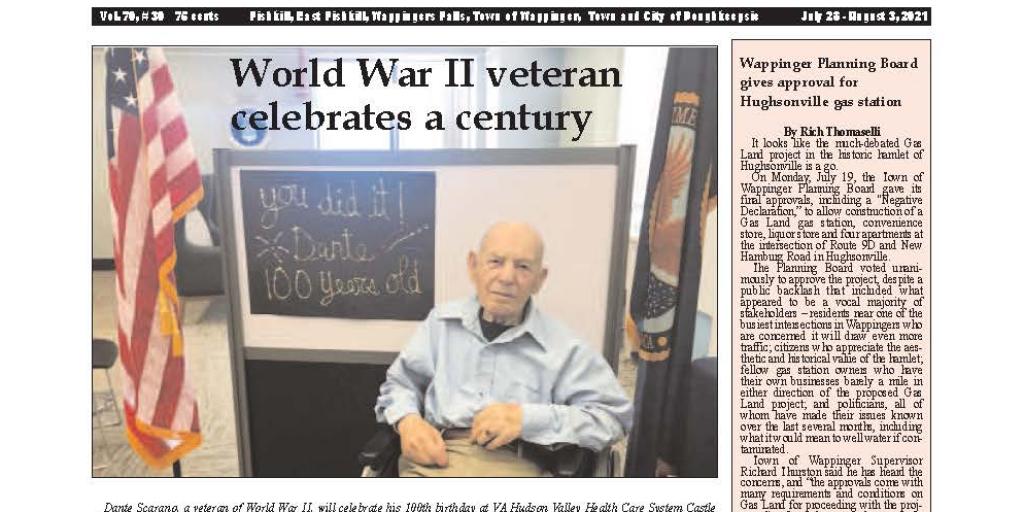 Dante Scarano was born 100 years ago. “In Jamaica, Long Island in 1921,” said Dante recently at the Veteran Affairs Hudson Valley Health Care System Castle Point campus. Dante was born on Aug. 2, 1921. Volunteers and staff at Castle Point are planning on celebrating Dante on his big day. There are signs anda ‘Happy Birthday’ banner already set up to celebrate the big day.

Dante, a World War II Army veteran, responded, “a lot,” when asked how many brothers and sisters he had in his
family. His parents had 14 children. Dante’s sister, Annie, lived until she was 104 years old.

Asked about what school was like when he was a child, Dante replied, “different back in the 1920s and 1930s.” He talked about how his father owned a farm, “185 acres,” said Dante, in New
Jersey. He said he and his family moved to the Garden State when he was “just
a kid.” “

I worked on [the] farm,” remarked Dante. “We grew corn, wheat,” and the
family had chickens on the farm too. “I got drafted in the Army in 1942,” remarked Dante. He was stationed
throughout Europe, including France. He noted, “To make a long story short, I could have been crippled or killed in World War II.” Staff at Castle Point said Dante was part of the Normandy
Invasion. The invasion, also known as D-Day, was launched on June 6, 1944. The
day Dante was interviewed, he did not say much about the invasion.

Dante recalled about his time in World War II that the Germans tried to hit
supplies with V1 and V2 rockets. Dante is one who is part of what has come to be
called The Greatest Generation. “The Germans were flying V1 and V2
rockets at our supplies. I was lucky,” said Dante that he got out alive. Dante said
his three of his brothers also served in the military.

After his time in the military, Dante worked at the United States Military
Academy at West Point for 30 years. He lived in Elmira, Chemung County, part of
his life “doing little jobs there,” he noted.

From an early age, though, he has been drawing, using his creativity for his artwork. His artwork was displayed on a table in the multi-purpose room at Castle Point. Below each photo is a description of it, the date and his age. Many of the pieces depict nature and animals.

Melissa Mazzio, Castle Point art therapist, said Dante’s art “shows how he
sees his world.” He also is a singer. Asked what his favorite song was, he replied with “I have
a lot of them.” Patricia Cole, Castle Point Recreation Department, said, “I remember when he
first came, he never wanted to sing.” Cole said he is very creative. James Metrando, a Castle Point volunteer,
said he thinks it is “terrific” Dante is turning 100 and the information he has about the
2nd World War “is really special.” Asked about his secret to a long life,
Dante said, “I did hard work on the farm.” Cole said that he walks every day and he
gets fresh air daily.