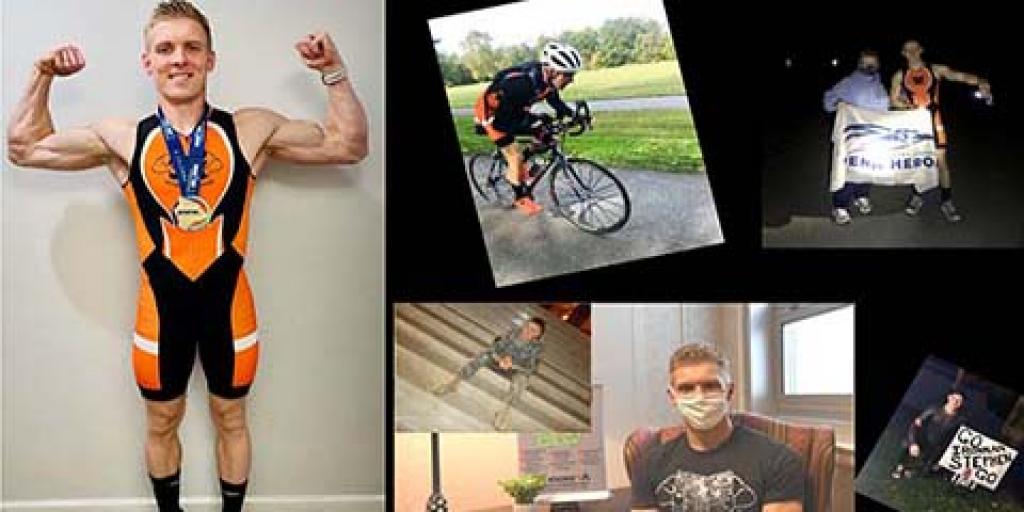 Stephen Glaus proudly served in 2011with the U.S. Army military intelligence in Iraq supporting Operation Iraqi Freedom. After his service, he landed his ‘dream job’ as a drone operator with a private company. While on a business trip in 2018 to Japan his foot suddenly went numb.

“So for the first 24 hours I thought that it was really funny and kind of just laughed it off. But when that lingered for the next 48 to 72 to the entire week, I realized that wasn’t normal and something might be going on,” Glaus said.

He went to the VA in Long Beach, California, where a doctor there diagnosed him with Multiple Sclerosis (MS). Multiple Sclerosis impacts the central nervous system and causes scar tissue on the nerves, according the VA’s website. It causes a broad range of symptoms including trouble with mobility, bladder function, and more. Many of these symptoms Glaus experienced.

The doctors tried to remain optimistic, Glaus said. “But honestly my prognosis, especially with how aggressive my MS was, didn’t look good and doctors expected that I would probably be wheelchair bound.”

Glaus and his family relocated to Pennsylvania where he enrolled for health care at Lebanon VA Medical Center. He began having back problems and was referred to Kevin Long, Doctor of Chiropractic, at the facility for assistance. Both patient and provider recall their first meeting.

“…So I’m hobbling around with my cane and he calls me back to his office…then he stops for like maybe ten seconds, almost like an awkward pause. He just looks and he says ‘I want to help you’.”

Kevin Long, Doctor of Chiropractic and a Navy Veteran said about their first meeting, “I mean, he was hurting very bad. He can barely walk. He was using a cane. And he was distraught…His function wasn’t very good and we’re just trying to figure out what we can do to help.”

Prior to being stricken with MS, Glaus had been very active. He had been considering doing a half Ironman, in spite of his diagnosis. An Ironman Triathlon requires a 2.4-mile swim, 112-mile bike ride and a 26.2-mile run. They can take upwards of 16 hours to complete. When Glaus had shared his vision with others, many said he was ‘crazy’. But Long, who had completed several Ironmans himself, said to Glaus, “Only a half? Why are you selling yourself short?”

After that first meeting, both were motivated and inspired to have Glaus reach his goal of completing a full Ironman.

According to Long, the medical center adopted a holistic approach to look at his “function and not his pain.” Glaus worked closely with the chiropractor, as well as, the physical therapist and other departments. Long began with ensuring that Glaus could walk and then moved on with his treatment from there.

“He would do an awesome adjustment,” said Glaus, “but at the same time he’d be there as like a coach and a mentor.”

Just as Glaus registered to participate in the Ironman and after training for months, COVID-19 began, and all events were cancelled. Fortunately, the Ironman event opted to implement a virtual version and Glaus was able to complete using that platform in the fall of 2020. Glaus met his goal and completed the full Ironman.

“You know, I know he gives me credit for it, but it didn’t run one step, I didn’t take one stroke in the water for him. I didn’t ride one mile for him. He did all of it…the guy is amazing,” said Long.

Glaus is happy with the treatment he received here. “I’m just thankful that there’s a team here that cares. Not just about me and my health, but as Dr. Long is a great example of, cares about my development as a person, my character and my goals and my ambitions,” he said.

Glaus intends to continue to participate in Ironmans in the next several years and his ultimate goal is to become the first person in the world with MS to ever swim across the English Channel.

Long is continuing to treat Veterans at Lebanon VAMC. “The Veterans here can get everything they need in one stop and all of the physicians talk to each other. It is the only place that I know where it is such a collaborative effort to really help the Veterans not only get out of their pain, but to get better. To get stronger. To get back to being normal health human beings again,” he said. “I absolutely love my job.”

Follow us on Facebook for more inspiring stories at www.facebook.com/VALebanon. To learn more about Lebanon VAMCs chiropractic program watch this video.