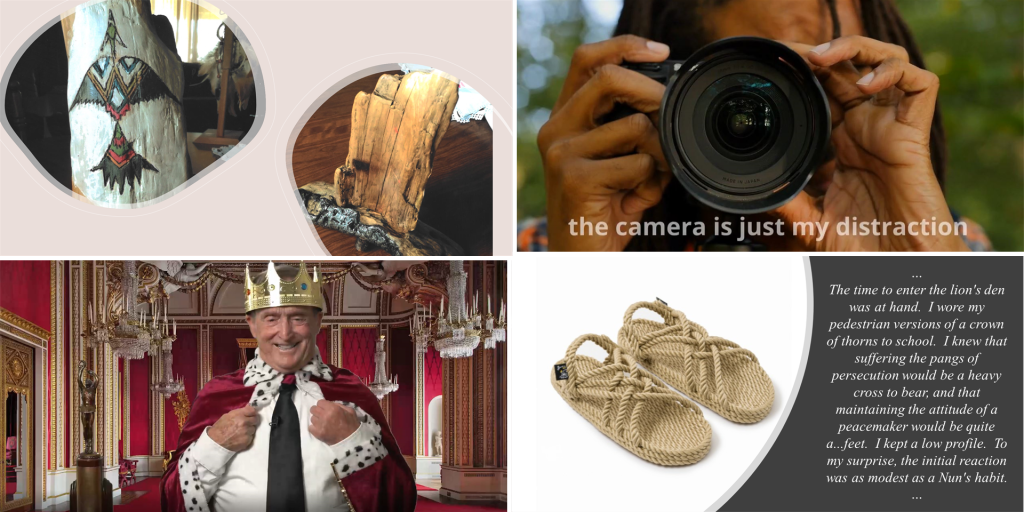 Left to right, top to bottom: "Bird of Thunder" by Leo Zabala, "It's not Just Photography" by Linda Hicks and Raine Jackson, "On the Throne" by Michael McCann and "J.C. Saves my Sole" by Robert Richert
April 28, 2022

They were among nearly three thousand Veterans who answered the call and submitted an entry for the National Veterans Creative Arts Competition. However, their creations and stories outstood the crowd and were consecrated as first-place winners.

Leo Zabala reached deep down into his roots, all the way to his ancestors, both Maya and Yaki, to carve and paint the “Bird of Thunder” in an organic piece of wood. The legendary creature is said to create thunder by flapping its wings and lightening by blinking its eyes. Zavala thought, “I never thought it would happen,” but the magically detailed art piece received first place in the Transfer Engraving Art Kit category.

Linda Hicks and Raine Jackson shared their pains, fears and feelings through a very emotional video, while photographing their surroundings in their path to recovery. “I know that there is something of value inside of me… but not quite sure what it is or where it belongs,” said Jackson in the video. Hicks adds, “I came to the VA to seek help to mend my brokenness. It’s not just photography.” Their video, “It’s not Just Photography” won first place in the Multimedia category.

Michael McCann, in his hilarious act as the “Supreme King,” as crowned by the Veterans of Foreign Wars Annual Baby Show in 1947, drew an analogy between himself and Prince Harry who also abdicated his royal status. While wearing a glamorous royal garment and performing “On the Throne,” McCann proclaims: “No bowing, no kneeling. No need to kiss my ring or any other part of my body.” Even today, he wonders, “How did my parents get me into this?” McCann was awarded first place in the Comedy Prose category.

Robert Richert respectfully played with words, expressions and scriptures associated with Christianity to tell his dilemma to wear or not to wear the sandals that are best known as the Jesus Christ sandals. His creative and clever writing “J. C. Saves my Sole” received first place in the Humor category. Richert has published a book about his experiences in the Vietnam War entitled “Open Wound." In addition, he is a professional artist and has several landscape and seascape paintings exhibited at fine art galleries throughout California.

Veterans who want to start utilizing art as a form of therapy or are just curious to give it a try are encouraged to check The Bulldog to find available classes. The Bulldog is VA Long Beach Health Education Catalog.

For more information about the 2022 upcoming competition, please contact: