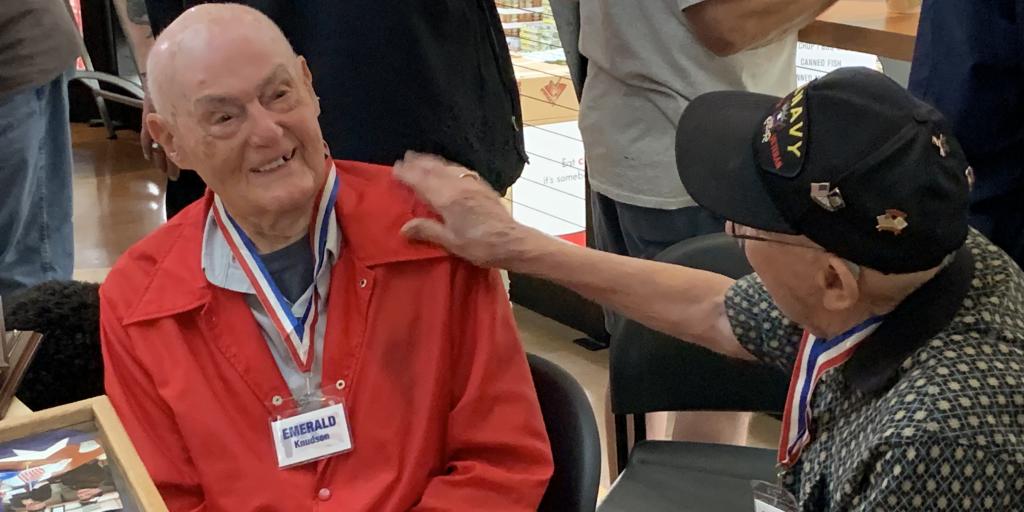 Emerald Knudson, left, shares a laugh with fellow World War II Veteran Carlton Stanton during a birthday party for Knudson at the American Heroes Cafe in Kenosha on Friday, July 15. Knudson will be 102 on July 20.
By David Walter, Public Affairs Specialist
July 15, 2022

Emerald Knudson and Lou Gehrig have something in common.

“I’m the luckiest guy in the world,” Knudson said Friday, referencing the famous speech Gehrig made upon his retirement from baseball.

But Knudson’s remark wasn’t because of retirement. The occasion was a surprise party in honor of his 102nd birthday. The Army Air Corps Veteran of World War II was feted at the American Heroes Café, a weekly gathering of Veterans at Festival Foods in Kenosha.

The café was especially lively when Knudson, accompanied by his son David, entered the room to rousing applause. Local dignitaries presented him with plaques, proclamations and an American flag, and the group sang: “When Johnny Comes Marching Home,” putting Emerald’s name in place of Johnny.

Handshakes, hugs and pats on the back followed, and there was a steady stream of well-wishers for Knudson, who spent nearly all of his life in Kenosha. Only recently did he relocate to Terre Haute, Ind., to live with his son.

“I’m just overwhelmed,” Emerald said. “This is unbelievably good. It’s really unnecessary, but I love all of it.”

“It’s amazing to see the turnout for my father,” David said, lauding Piasecki Funeral Home, which organized the recognition. “He knows a lot of the people here. And it’s good for him. … Just to see the smile on his face and (his friends). He had no idea this was happening when we pulled into the parking lot.”

Emerald is still sharp of mind and was quick with quips and kind words as his comrades – including two other World War II Veterans – offered hearty congratulations. He also needled the local politicians who gave him plaques and platitudes.

“I voted for you,” he told state Sen. Robert Wirch, D-Somers, as Wirch read a proclamation.

When Kenosha County Executive Samantha Kerkman asked Knudson how he was doing, he said with a grin, “I’ve been better.”

Knudson was born in Illinois on July 20, 1920, but moved to Kenosha when he was 5. He was drafted into the Army Air Corps in December 1942, deploying to North Africa.

His job was siting and photographing the bombing missions; he said he was congratulated when the missions were successful but blamed when the bombs missed their targets.

In 1945, he and his crew mates were stationed in Italy, preparing to join the battle in Japan, when the atomic bombs were dropped and the war ended.

“Sometimes I look at my discharge papers and think, ‘Was I really there?’ It’s just incredible,” he said.

Knudson returned to Kenosha and married the girl across the street, Mary Bielewicz. The two moved to a farm and raised four children.

Knudson left the military soon after the war’s end. Back in Kenosha County, he tended the farm while also working as a milkman and an oil delivery man. He retired in 1982 from the Pleasant Prairie Highway Department.

Many remarked that Knudson is part of the “Greatest Generation,” who grew up during the Depression and fought during World War II.

“We’re so proud that these individuals from the Greatest Generation left their family behind, put on their uniform, and went to foreign soil to fight for the freedom of this country,” said Kenosha County Veterans Service Officer Ali Nelson. “Because of that, we’re here today as a free country.”

Knudson noted all the service men and women who didn’t return from the war and those who came back with serious injuries.

“I was very fortunate to get out of there (the war) with nothing serious – just a few scrapes,” he said.

“And now here I am, an old man. I’m very, very happy in my life. I got the greatest kids in the world. I don't have a lot of friends anymore because most of them are dead. But those I do are unbelievably good.

“It’s incredible, the friends I've made and the people who have looked after me all my life. It's just unbelievable.”