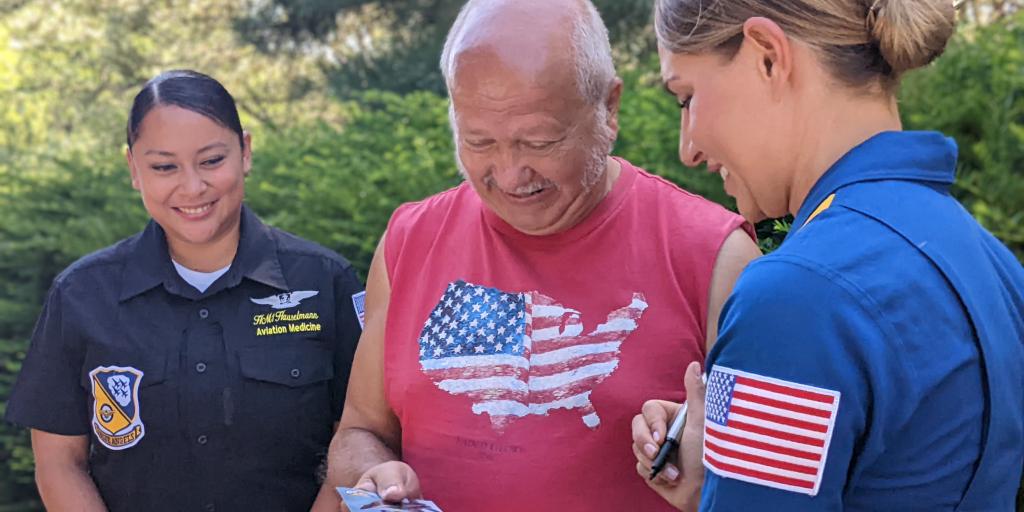 That’s what makes the Blue Angels, the U.S. Navy’s precision flying squadron, so special. And becoming part of that team means total dedication.

“What do I do in my personal life? Honestly, I sleep,” said Lt. Cmdr. Monica Borza, flight surgeon with the Blue Angels, during a meet-and-greet with Milwaukee VA inpatient and outpatient Veterans Friday.

The squadron is in town for this weekend’s Milwaukee Air & Water Show, with the Blue Angels slated to perform at 3 p.m. Saturday and Sunday.

During Friday’s visit, Borza and Hospital Corpsman 1st Class Amelia Hauselmann posed for photos, signed autographs and talked about their backgrounds and what it’s like to be a Blue Angel.

While neither is a pilot, they both play critical roles: Borza is the physician assigned to the squadron. She evaluates the performances and practices while also monitoring and staying in contact with the pilots at all times. Hauselmann is a hospital corpsman, working with Borza.

“This is a huge responsibility and a big honor that we do not take lightly,” Borza said, noting that the team is constantly in mission mode.

The Blue Angels work six days a week, either practicing or performing, Borza said. There are debriefings after each show as the team pores over tapes of the performances and works to refine and improve the show.

That leaves just one day for personal time before practice sessions resume, and it’s off to a new city.

The schedule is grueling, but well worth it, Borza and Hauselmann said.

“This is a special duty,” Hauselmann said, saying she especially enjoys outreach events like Friday’s program. “It’s what made me want to be part of the team. It’s a very unique billet, and it’s probably never going to be this cool again.”

Other interesting facts gleaned from the event:

Learn more about the Blue Angels here. For information on the Milwaukee Air and Water Show, click here.