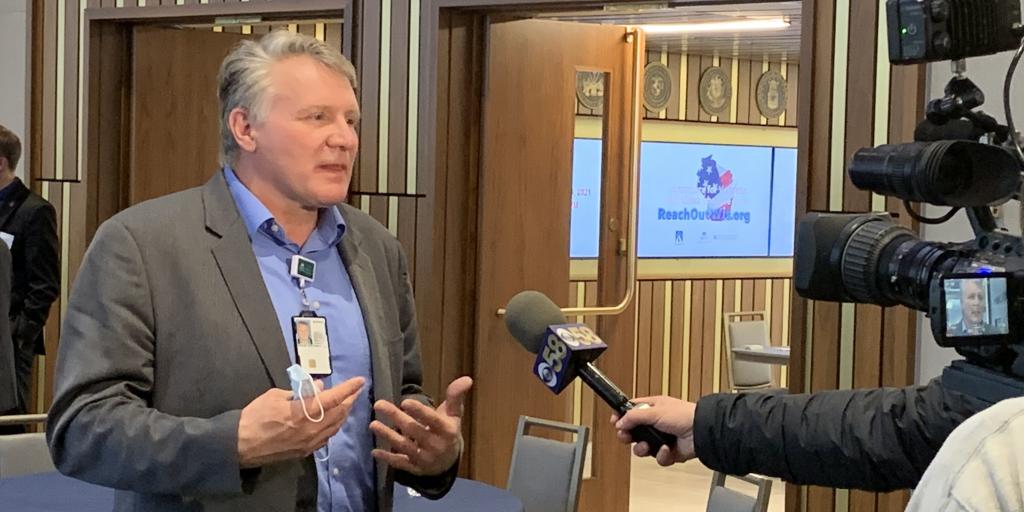 Preventing suicide by Veterans could be as easy as two words: Reach out.

That’s the message from ReachOutWis.org, a new public awareness campaign aimed at stopping Veteran suicides by encouraging Veterans to get help, and telling people to reach out to Veterans who may be struggling.

“Just reach out,” said former Green Bay Packer Daryn Colledge, who is a spokesman for the project. He and other key players in the project kicked off the initiative during an event last week at the War Memorial Center. “Call friends, colleagues and former teammates. Just spread the word. We need to turn down the statistics.”

And those statistics are sobering: About 18 Veterans die every day from suicide, according to the U.S. Department of Veterans Affairs.

Meanwhile, about 20 percent of all suicides in Wisconsin are Veterans, said Sara Kohlbeck, director of Suicide Prevention for the Comprehensive Injury Center at the Medical College of Wisconsin.

Dr. Bert Berger, head of mental health services for the Milwaukee VA, noted that VA does a lot of great things to help Veterans struggling with thoughts of suicide. The problem, he said, is most Veterans who die by suicide aren’t getting care through VA – or any other health provider or Veterans organization.

“This project is so important to us because it allows us to connect to the community and help Veterans get the help they need,” Berger said, adding that ReachOutWis.org targets the entire community.

“This project is really about going beyond what we (VA) does for Veterans. … (It’s about) reaching out to anyone who has worn the uniform,” Berger said.

Public messaging for the project was developed with input from Veterans focus groups. And television ads feature Veterans involved in Feast of Crispian, a highly regarded therapy program that uses Shakespearean drama to help struggling Veterans.

The messages emphasize a number of themes, including camaraderie, family, safe storage of firearms and getting help.

“There’s a lot of passion behind this,” said Dan Buttery, president of CEO of the War Memorial Center, a key player in the ReachOutWis.org project as well as the Southeastern Wisconsin Task Force on Veteran Suicide Prevention.

“This is not a short-term initiative; we’re looking at a number of years,” he said. “We’re trying to get as far upstream as we can – staving it off, addressing it before it gets to that crisis point. Reaching out is about being there for those loved ones and looking out for them.”

Buttery noted that many community groups and nonprofits have joined in the campaign, along with the Department of Veterans Affairs, to make the project as far-reaching and effective as possible.

“We can have a positive impact on this. We can change this,” he said. “We just need to be there, not only for the Veterans, but also for their loved ones, because that’s who the Veterans listen to. It’s that network of love and support … that punches through that cloud.

“Let’s have an impact. You can help us achieve zero Veterans suicides in Wisconsin. It’s only done through a community.”