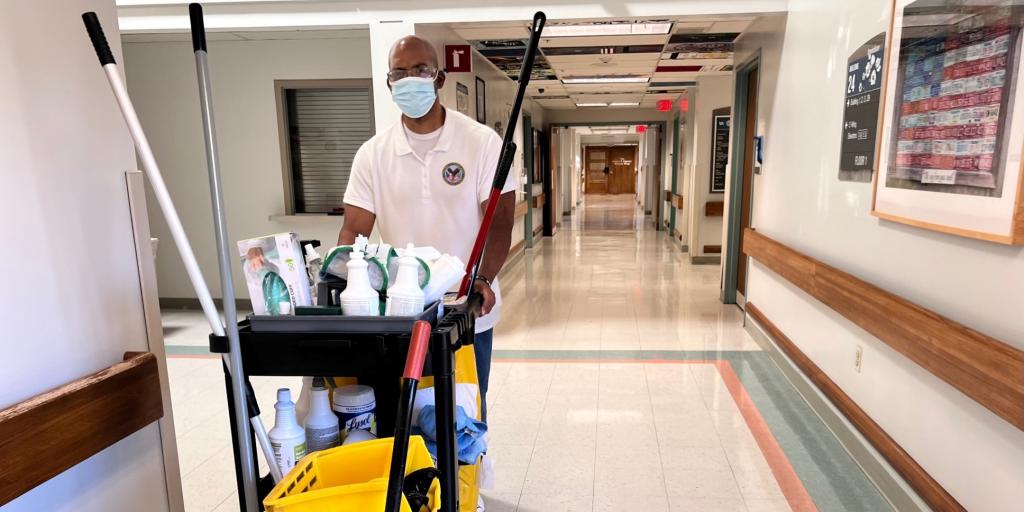 "VA saved my life," says Shedrick Ward. "They’re going to have to kick me out of this place if they want me to leave."

When you walk through the doors of VA North Texas Health Care System's Domiciliary Residential Rehabilitation Program, you notice the place is spotless.

Take a few more steps, and you hear it; the squeaky wheels coming down the hallway as Shedrick Ward rolls his cart, greeting everyone he sees. His cheerfulness and the smile on his face are hard to hide, even while wearing a mask.

But he wasn’t always as jovial as he appears.

Addictions got in the way

“I was spending upwards of $1,200 a month on drugs and alcohol to feed my addiction,” says Ward. “I was going through some horrible stuff mentally, and that’s the only way I knew how to address it. I needed to be sedated to make it through the day.”

When Ward separated from the Army in 1993, he returned to his hometown of Detroit, Michigan. The streets were familiar and offered him a chance to make more money than he’d ever seen.

“I sold drugs.” says Ward. “It was easy, and the money was good, but it didn’t solve my problems. Eventually, I began using those same drugs.”

Between 1993 and 1999, Ward was in and out of jail. After being paroled, he moved to Dallas, Texas, searching for a new beginning.

“I got to Dallas and went right back to what I knew,” says Ward. “I even began drinking after I moved to Texas. Before that, I didn’t like the taste.”

Ward was working a full-time job and says he pretended to be okay, but his addiction became uncontrollable following his divorce in 2013.

“Every day I used drugs. Every day I drank alcohol. It cost me everything,” says Ward. “I was homeless and lived under a bridge. I was alone and had no one to turn to for help. My own family wanted nothing to do with me. They told me to never come back.”

In 2020, Ward went to the Dallas VA Medical Center and enrolled in the rehabilitation program.

“It wasn’t easy. I didn’t make it easy for the people working at the domiciliary. But it was a change I needed to make for me,” says Ward. “I was tired of pretending to be okay and sedating myself for nearly 30 years. I thought there is surely more to life than this. That was my motivation.”

Ward, reflecting on the past 30 years, says if VA hadn’t been there for him, things could be very different than they are today.

“VA saved my life. The staff at the domiciliary helped me develop my coping skills and taught me that I don’t need to turn to drugs and alcohol when things don’t go my way,” says Ward. “The peer support specialists and counselors here showed me it was possible to break my addiction, one day at a time. They showed me how to set goals for myself and how to meet them.”

Being there for fellow Veterans

Ward uses the skills he learned, to encourage other Veterans going through similar situations and even uploads prayer videos to YouTube.

“I record my prayers for my fellow Veterans to see and hear,” says Ward. “I hope the people who watch them, find the motivation and courage to not give up and get help,” he says.

“But mostly, I record them for me. I watch them back to remind myself that I’m on the right track.”

Ward finished the rehabilitation program and was accepted to the Compensated Work Therapy Program, which set him up for a full-time job.

“They’re going to have to kick me out of this place if they want me to leave,” says Ward. “VA accepted my package for full-time employment, so I’ll be a full-time Environmental Management Service employee for VA North Texas.”

Ward looks forward to continuing his service at VA and being an example for other Veterans.

“Change is possible. It’s not easy, but it is possible,” says Ward. “It starts with committing to yourself. You have to be the change.”