Office of Public and Intergovernmental Affairs

VA has made ending Veteran homelessness by the end of 2015 a top priority, undertaking an unprecedented campaign to dramatically increase awareness of VA services available for homeless Veterans and Veterans at risk of becoming homeless. Learn more about VA's award-winning programs and partnerships that help Vets and their families find homes.

"We have more work to do and will not be satisfied until no Veteran has to sleep on the street. The success we have achieved is directly attributable to the hard work by all of our staff, and the federal, state, and community partners who are committed to ending Veteran homelessness."
~ Secretary of Veterans Affairs Eric K. Shinseki. 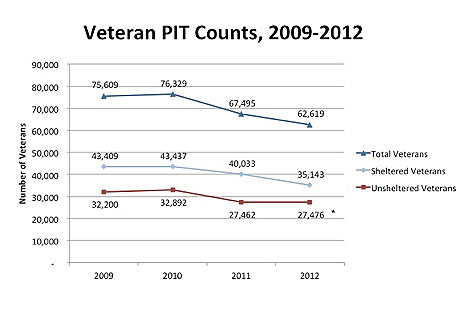 This chart shows the number of sheltered and unsheltered homeless Veterans during the annual Point in Time Count spearheaded by the Department of Housing and Urban Development.

Check out photos of VA's Homeless Veterans Initiative at work

During the last week of January, the Department of Veterans Affairs, Housing and Urban Development, and local agencies across the country joined in a Point-in-Time Count—to get a statistically reliable, unduplicated count of sheltered and unsheltered homeless Veterans, individuals and families in the U.S. The photographs below capture the PIT count in San Diego, Calif.

A volunteer prepares to distribute clothes to homeless Veterans during a Washington D.C. VA Medical Center Winterhaven Veteran stand down.

Volunteers prepare for the annual Point in Time Homeless Count in Washington, D.C.

On June 5,2012 the Department of Veterans Affairs (VA) joined The Department of Housing and Urban Development (HUD) and Jon Bon Jovi, Chairman of JBJ Soul Foundation, to announce the five finalists of Project REACH (Real-time Electronic Access for Caregivers and the Homeless).

VA's Homeless Initiative in the News