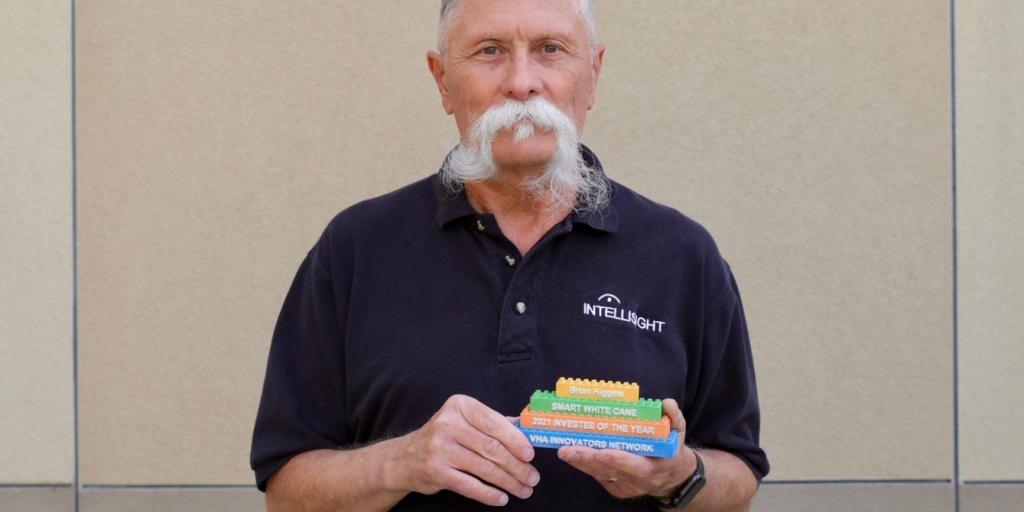 Safe and independent navigation is one of the biggest challenges for those who are blind or visually impaired.

After losing his vision more than 20 years ago and finally having to give up his driver’s license, U.S. Navy Veteran Brian Higgins set out to overcome these challenges. His efforts have paid off when he became the winner of the 2021 Innovators Network (iNET) Investee of the Year Award for his prototype of a smart white cane.

Higgins was diagnosed more than 20 years ago with retinitis pigmentosa, a rare genetic disorder that affects roughly 1 in 4,000 people with difficulty in seeing at night and loss of side (peripheral) vision. He has worked for the Western Blind Rehabilitation Center at VA Palo Alto health care since 2004, serving as a certificated computer access and access technology instructor.

His work fit perfectly with his love for inventing. He has also been a long-time member of the Silicon Valley Robotics Club. This interest inspired his work on several inventions, including a robot guide and the prototype of his smart bike that he rides every day to work. However, the one tool he uses every day is the traditional white cane that most people with vision loss use to get around, which has not evolved since its invention nearly 100 years ago.

“Over the years, I noticed major changes in technology with coding and artificial intelligence evolving, as well as computers getting smaller. So when I saw a company experimenting with sensors on glasses, I began looking at how I could do the same with my white cane,” said Higgins.

People are normally trained to scrape the ground in a 3-foot arc in front of them with normal white canes. While it has been enough to help them get around, it still misses many obstacles above the ground that could potentially hurt them.

For the past 3 years, Higgins has been actively using his prototype of the smart white cane, which can be paired with an iPhone and features feedback tools such as sound and haptic feedback. The sensor package includes light detection and ranging, commonly known as LIDAR, as well as 2 ultrasonic sensors.

It was not until the past year when he joined VA’s Innovators Network Spark-Seed-Spread Investment Program that he got the right support he needed to potentially share his invention with everyone. The program aims to identify and accelerate employee-inspired innovations to improve health care experiences for Veterans, families, caregivers, and employees.

“I’m a thinker and inventor, but there were other pieces of the puzzle that I needed help with. That is what this innovation network is about, providing support. Every request was met with a yes, and I could not have done this without the support of Innovation Specialist, Kalyn Essex, and Director of the National Center for Collaborative Healthcare Innovation, Dr. Thomas Osborne,” said Higgins.

When asked about the next challenge, he mentioned, "My dream is now to patent my smart bike!”