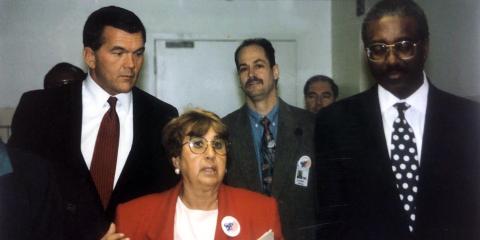 During the Veterans Health Administration’s 75th Anniversary, VA Pittsburgh Healthcare System looks back on those who pioneered its Homeless Veterans Program and Domiciliary. The Domiciliary’s continued success in helping Veterans shows some problems can be solved without medicine.

As the Veterans Health Administration celebrates its 75th anniversary this year, VA Pittsburgh Healthcare System reflects on the work of a determined social worker who is credited in great part with establishing its homeless Veterans program. The late Vincena “Vinnie” Malec paved the way for programs that go beyond clinical care to help Veterans whose problems are best solved without medicine.

VA Pittsburgh’s homeless Veterans program got its start in 1988 when Malec and her team partnered with the American Legion to provide housing for 10 homeless Veterans on Cypress Street in Coraopolis. From there, Malec tirelessly advocated for the establishment of VA Pittsburgh’s first Domiciliary Care Program until it opened in 1994 at the former Highland Drive campus.

Malec died in 2015, but the Domiciliary, or Dom, and its programs live on. The Dom is now located in the Veterans Recovery Center (VRC) on the H.J. Heinz III campus in O’Hara Township.

Those who knew Malec said she put her heart into helping homeless Veterans. VA Pittsburgh social worker David Allen described Malec as a “real pioneer” who was very vocal in her support of programs for homeless Veterans.

“She was a hard person to say no to,” said Allen, who has been on staff since the Dom first opened at Highland Drive.

Lisa Fitzsimmons, VRC program manager, said Malec’s “persistence and consistency are why we have the program today.”

Rich Deakin, a vocational rehabilitation specialist, said space was tight at the Dom’s original site on Highland Drive. Dormitory style rooms each had three beds. Veterans had access to two TV rooms. Clinical services were provided in a large room, with staff offices interspersed throughout each wing.

As word of the Dom’s existence and its substance abuse program spread, VA medical facilities from throughout Pennsylvania – including Erie and Philadelphia – began to refer Veterans to the program. Veteran occupancy quickly maxed out at 50, said Allen.

“The Dom Veterans got involved in community softball and basketball leagues, they had use of the gym, the swimming pool and the bowling alley,” Allen said.

Buoyed by their newfound support, Veterans in the program worked hard to lift the stigma of homelessness.

“The Veterans staged car washes with the staff and volunteered for an escort service where they would walk staff members to their cars at night,” said Allen. “That built a lot of trust between the Veterans and the community.”

When it was announced the Highland Drive campus would close, VA Pittsburgh relocated the Dom to the Heinz campus in 2008.

“Gary took what Vinnie started and guided it to be the successful program it is now,” said Deakin.

Unlike the condensed housing and recreational facilities at Highland Drive, the Heinz Dom is configured into homelike pods. The change helps Veterans learn independence and living skills. Some who enroll in the program, Fitzsimmons said, “only know the military where they’re told what to do, so they have to learn these skills.”

In the 27 years since Malec succeeded in having the Dom established at VA Pittsburgh, the program has served 3,455 Veterans – and counting.

And a fitting legacy for Malec.