A simple gift for a WWII Veteran and his family 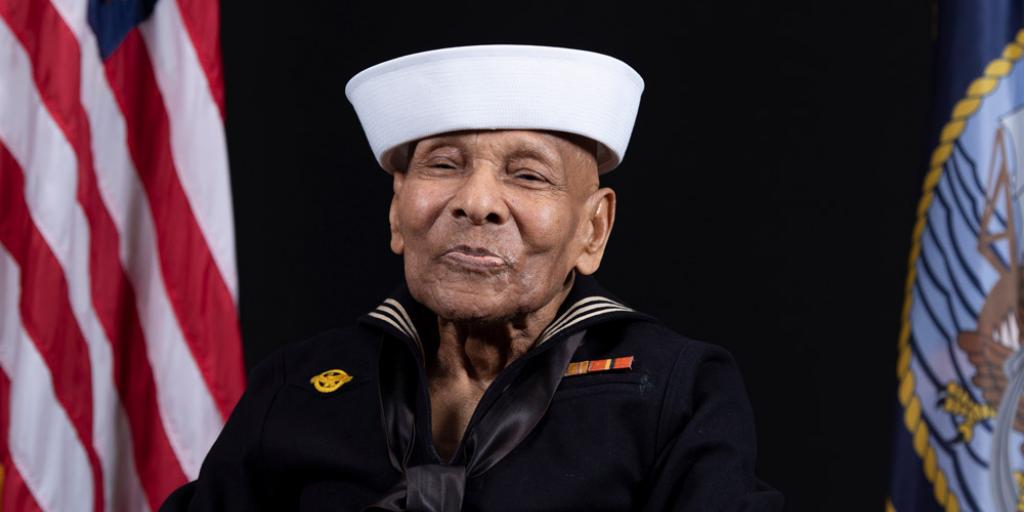 A WWII Veteran’s family has never seen a formal picture of him in uniform from his service in the Navy. VA Pittsburgh Healthcare System staff recently banded together to accomplish a seemingly impossible and very special good deed for a Veteran and his family.

Drama therapist Rosimar Hernandez and Veterans experience assistant Margaret Felkay wanted to go above and beyond the call of duty for Veteran Mager Ely and his family.

Ely, 97, has been receiving care at VA Pittsburgh since April 2019 and lives in the Community Living Center (CLC) on the H.J. Heinz III campus. He served in the U.S. Navy during World War II as a steward and steward's mate. He was stationed in the Philippines with the 7th Fleet during the Philippine liberation.

His family has never seen a formal picture of him in uniform from his service in the Navy and expressed their sincere wish to be able to see their dad in uniform. His own was stolen during his return trip home in 1946.

"We just wanted a picture of my dad, and we mentioned it to Rose (Hernandez)," said Ely's youngest daughter, Lisa Ely. "I told Rose, someone said there's a place where you can get uniforms of Veterans. She said let me ask around. We just wanted the uniform to take a picture of Dad."

Hernandez thought at first this would be an impossible wish to grant but worked on it with Margaret Felkay and Soldiers & Sailors Memorial Hall, which collects American military uniforms and artifacts.

"We occasionally get a collector who donates uniforms with no name attached to them, no history of the uniform," said Lisa Petitta, the hall's collection manager. "We put those aside in case we get special requests. When Margaret called and asked if we would be able to help, my first reaction was, I will try my best."

Petitta used a copy of Ely's DD Form 214 (Certificate of Release or Discharge from Active Duty) to locate an appropriate uniform and personalize it with the correct service ribbons.

"Details few will know, but we will," said Richard Laufer, associate chief nurse at VA Pittsburgh and a Soldiers & Sailors board member. Laufer hand-delivered the DD-214 copy to Petitta.

All the effort and coordination came together late in August at the H.J. Heinz III campus Learning eXchange.

Felkay picked up the Navy uniform from Soldiers & Sailors. VA Pittsburgh photographer Bill George set up a makeshift photo studio – complete with lights, a black backdrop and flags – in the Learning eXchange. Hernandez escorted Mager Ely and his family – daughters Betty Turner and Lisa Ely and granddaughter Keshona Beasley – to the Learning eXchange. Several VA Pittsburgh staff members and leaders were on hand to welcome the family.

"When you opened the door, I saw the American flag and Navy flag, and you guys standing there," said Lisa Ely. "I thought this is so official, it's so big. The flags made it all perfect. I couldn't hold my tears back. It was a life-changing event."

Ely's nurse and his daughters helped him don the 1940s-era blue, wool Navy service jumper and cap. A staff member brought a full-length mirror into the room and when Ely saw himself, he pointed toward his reflection and smiled.

Once positioned under the lights and in between the flags, Ely sang softly and chuckled as the photographer worked to capture his personality. Joined by his daughters for a series of photos, Ely spontaneously raised his arms, prompting joyful laughter.

Ely's daughters said their father hasn't received much recognition for his military service, and they felt he truly appreciated the gesture.

"We showed him the pictures later that night and he was smiling," said Turner.

"He wants to know he is still a person," said Lisa Ely.

Ely's family members weren't the only ones touched the day of the photo shoot.

Lisa Petitta could not attend the photo shoot in person but received live updates via text messaging. She said the event made her year.

Felkay said she understands first-hand the importance of seeing a loved one in his or her military uniform.

"Although we can't do this for every Vet, I felt bad that his family never saw him in uniform," said Felkay. "My dad is a Vet and I grew up seeing him in uniform, and I know how special that is."

Lisa Ely described the photo shoot as a beautiful ceremony.

"It was meant to be a photoshoot and ended up as a true-blue ceremony," she said. "It gave you something warm in your stomach, it's a feeling I don't want to ever leave me. But even if the feeling leaves, I have pictures that are forever mine. Not just the pictures because now it's in my heart. I feel like I walk with my father now; I walked a part of his life with him."