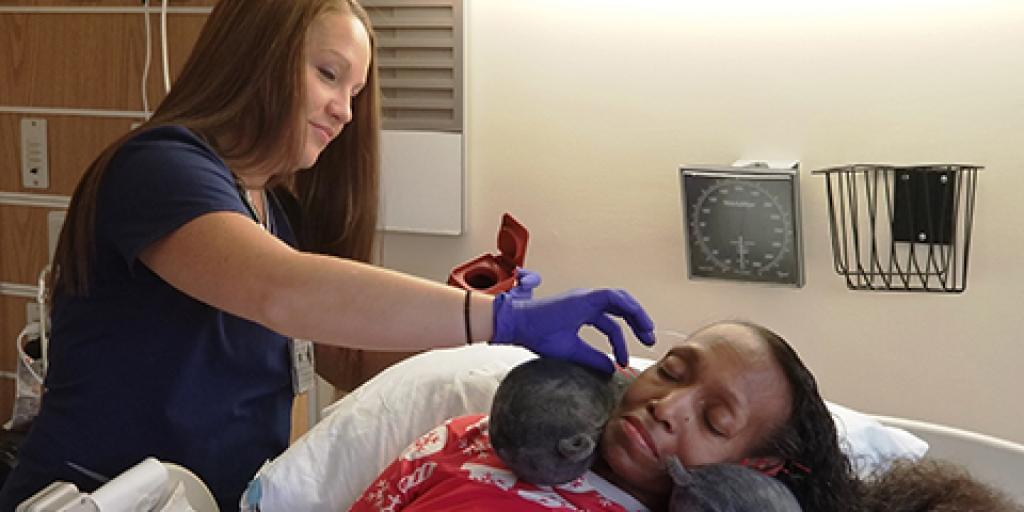 Acupuncturist Amanda Federovich places the first of two needles in one of Nadine Stanford’s ears.
By Keith Gottschalk
November 12, 2019

Veteran Nadine Stanford was in excruciating pain. Twenty minutes later, after a series of 10 small needles were placed in her ear, the pain was gone. Battlefield acupuncture is how it happens.

And more than that, she became its first success story. Not more than 15 minutes before the treatment started, Stanford had told acupuncturist Amanda Federovich that the pain in her buttocks was a 10 on the zero to 10 scale – the worst pain she could imagine.

It was this pain that kept her up the night before, ruined her mood for the morning and put her under a lot of stress. Stanford had kept to a regimen of narcotic painkillers, analgesics, benzodiazepines, kinesthesia and music therapy. Nothing had really worked until today.

And all it took was five tiny needles inserted gently in each ear.

"I was elated that Nadine was pain free by the end of the session," Federovich said. "Her daily life is a struggle due to pain from her contractures, spasms and wounds. It is very overwhelming to see her that happy and relaxed."

Although Stanford had the best possible outcome, battlefield acupuncture doesn't always work in the same way for different people.

"The average response to BFA is a 2.2-point reduction in pain (on a scale from 0-10) from pre- to post- session," said Federovich. "With that being an average, some Veterans have a more significant pain reduction response than others. Having total pain relief is the best-case scenario."

Federovich, a certified registered nurse practitioner, is the first clinician at VA Pittsburgh to be certified in battlefield acupuncture, a specialized subset of acupuncture. BFA was designed to be used in wartime with treatments only in the ear as a representation for the whole body.

There are five points on the ear that represent certain areas of the body. By confining the technique to the ear, practitioners can work in battlefield environments where a service member's entire body is not ready for treatment. Currently, the U.S. Air Force has their own certification for battlefield acupuncture that can be used in the field.

When the needles go in, Federovich said, there is a small pinch and then the patient usually feels a sense of relaxation. A needle is put in one point of one ear and then the same point in the other ear until the patient says they feel better.

Stanford said she didn't feel the needles. Every time a set was placed in, Federovich asked Stanford to move her arms and hands. With every placement, Stanford found it easier to move them. Every time Stanford was asked if she wanted the treatment to continue, she responded with an enthusiastic "oh yeah," or "yes ma'am!

Battlefield acupuncture, as well as the standard acupuncture available at VA Pittsburgh, is a key component of the whole health movement, which concentrates on outcomes the Veteran wants for their life and arranges care to meet those outcomes.

"It's really a great component of whole health," said Federovich. "We're empowering our Veterans to be an active participant in their health care. Things like chronic pain, anxiety, PTSD, these are things that battlefield acupuncture can address so the Veterans are not dependent on meds."

There's already more Veterans eager to try out BFA and Federovich's continuing mission is to train other providers to do what she does.

"I am eager to roll BFA out to the rest of the facility," said Federovich. "I am hopeful that other Veterans will have similar responses and improve their quality of life."

Editor's note: If you think battlefield acupuncture might benefit you, talk with your VA provider.