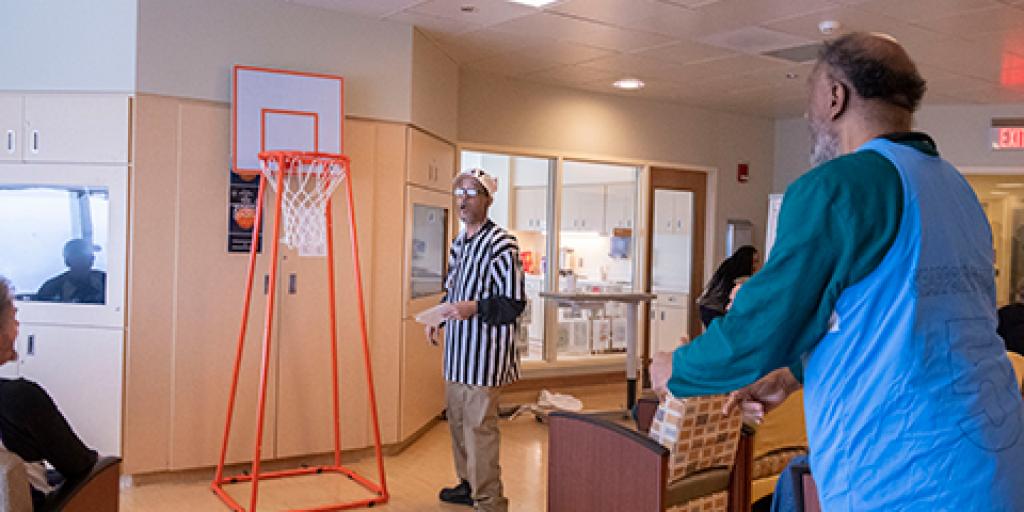 Who knew a childhood competition of paper basketball among siblings would later inspire a therapeutic game bringing military Veterans together for rehabilitation and stress relief?

Mark Charlton, a behavioral health nursing assistant at VA Pittsburgh Healthcare System since 2005, grew up practicing basketball skills using everyday objects at home. In a game of paper hoops, for instance, he and his brothers would toss crumpled paper into a garbage can to see who had the best aim.

Fast forward to adulthood and working at VA Pittsburgh's now-closed Highland Drive campus. Charlton occasionally shot paper hoops while on breaks at work and soon noticed patients picking up on it, too.

"Next thing you know, somebody came up to me and said, 'think I can make it from here?'" Charlton said.

He noticed Veterans began entertaining themselves with light-hearted games of paper hoops instead of watching television in the day room.

"One day at home I was just watching TV when the idea popped in my head of an actual game," Charlton said. "The Veterans were shooting in the garbage can so often as an unofficial game, I thought it would be cool to come up with an actual basketball-oriented game."

Charlton brainstormed ideas for resources: a hoop, a ball, jerseys.

"It ended up taking over a year to develop it, with rules and everything," he said.

Charlton continued to work on the idea after VA Pittsburgh relocated from Highland Drive to University Drive in Oakland. On Feb. 13, 2014, the first official Hoops 4 Troops game debuted.

The game is an interactive group activity for Veterans in the inpatient behavioral health area. The idea is simple: two teams compete against one another by answering trivia questions covering a range of topics from movies, music, sports and politics to questions relating to their stay at VA Pittsburgh.

Each question has a different point value.

"Important questions dealing with mental health and other issues are 50-point questions, not just 2," Charlton said. "Those are usually bonus questions that we try to slide in during the fourth quarter for some learning while we're playing."

Games are usually played every Friday between two six-player teams called The Pittsburgh Special Forces and The Pittsburgh Sharp Shooters. Any inpatient Veteran on the unit can join in the fun. Many patients enjoy playing, according to Charlton and his fellow staff members, but even those who don't participate enjoy watching.

Every player gets to wear a jersey during the competition, something Charlton has worked hard to guarantee. The first jerseys were personally made by a staff member in Voluntary Service.

"We still use those every once in a while for a throwback game," said Charlton. Moving forward, staff in Voluntary Service are helping obtain funds for electronic scoreboards and a third set of jerseys.

Charlton has seen Veterans thrive as they practice teamwork and group participation.

"The game benefits them in every way you can think," said Charlton. "It also benefits the whole unit and can change the atmosphere on the unit. Some Veterans even forget they are here in the hospital because they're into the game so much."

Jonathan Heshler, a behavioral health nurse manager who has worked with Charlton on the unit for many years, said the game makes a noticeable, positive difference for Veteran inpatients.

Another benefit is simply the physical aspect of getting up and shooting the ball, according to Charlton. Patients in wheelchairs also play and will stand up momentarily or shoot from their wheelchair.

"The group is more cohesive, there's more camaraderie and the Veterans look forward to it," said Charlton. "They're enjoying the game and trying to answer questions. It gets competitive."

TVs in the area are turned off during the game and afterward for a while. The atmosphere is noticeably calmer during this time, say staff.

"After the game is over, there's a sense of relief following a burst of energy, with everyone chilling and relaxing," Charlton said. "That goes for me, too."