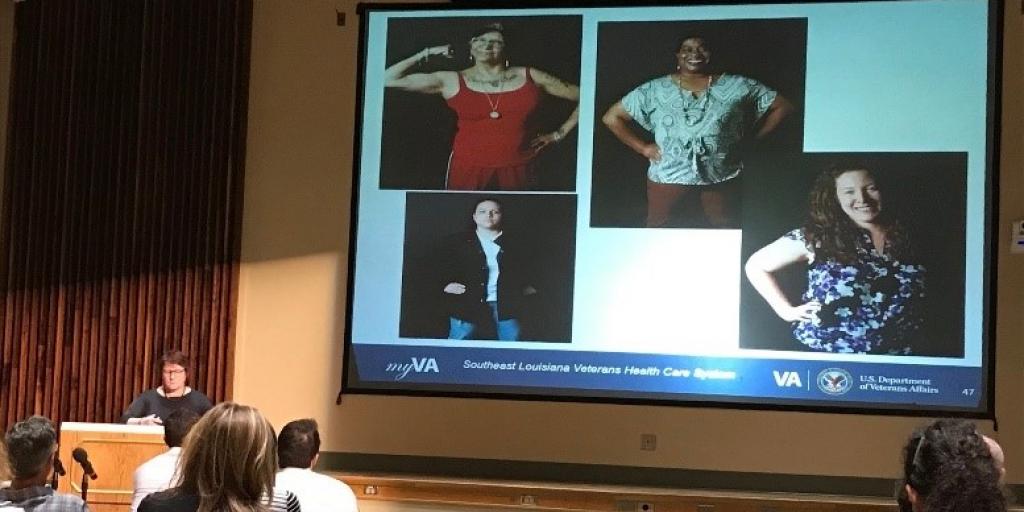 Brewer described two crucial goals of the campaign: education and respect for women Veterans. Educational themes on campaign graphics include catch phrases such as, "Catcalls: It's not a compliment. It's harassment," and a checklist of what is and what isn't acceptable to say or do at  VA. The respect component, launched in 2019, includes large-scale graphics showcasing women Veterans' service and accomplishments.

In one VA survey, Brewer said, 24% of respondents reported men harassed women, including through  cat-calling, ogling, propositioning, groping and questioning their Veteran status. That harassment is considered a major factor in lower rates of VA usage between women and men.

More damaging, however, is that harassment is a threat to women's care and peace of mind. It causes some women Veterans to relive military sexual trauma or harassment, leading to their not using a well-deserved benefit of their service and sacrifice to the nation.

"They're thinking, 'Oh, I'm being harassed again—what's going to happen next,' or, 'I got enough of that (kind of treatment) in the military,'" Brewer said.

Women are the fastest growing demographic of Veterans and military service members. Women using VA health care currently make up 8% of VA patients, and that number is expected to rise to nearly 20% over the next ten years.*

"We just don't understand the relationship between resilience and trauma. We know it takes a very long time to change the culture (in institutions), but (ending harassment) is the right thing to do. It's right for the mission and right for business," Brewer said.

In New Orleans, Brewer said efforts to improve the environment for women include all-staff education, bystander intervention training, feedback surveys, and changing interior design so that women who enter don't feel like they're walking through a gauntlet or being watched or threatened.

"We need to be conscious of our mission, have compassion and kindness, and train seriously and often," Brewer said.

*VA estimates an increase in female patients based on an increasing number of women in the military.