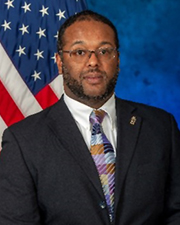 Lenearo Ashford was selected as the Acting Executive Director for the Office of Logistics in October 2021, prior to his selection he served as the Executive Management Officer for the Office of Transition and Economic Development. In this capacity he was responsible for supervising 15 staff members that supported an office of 82 personnel that conducted the legislative mandated Transition Assistance Program course for Transitioning Servicemembers and their families.

Prior to taking over as the Executive Management Officer, he performed many duties in the Department of Veterans Affairs and Department of Army as a civil servant. Roles include serving as the Deputy Chief Operating Officer within the Veterans Health Administration. In this capacity, he was responsible for supervising 12 staff members that support six Executives, and approximately 3,000 employees for fiscal, human resources, and daily business operation support. He served as a Management Analyst for the Office of Information and Technology in Space and Facilities Management. Responsibilities included the procurement and renovation of OIT’s real estate holdings, acting as the National Safety and Occupation Health Officer, and coordinating efforts to automate space management of the facilities. He worked with the Strategic Acquisition Center as a Program Manager and Analyst, serving as the Deputy PM for a $25B acquisition and directly responsible for assisting other VA program offices in defining and refining their respective requirements at various dollar amounts. During his time with the Department of Army as a civil servant he was one of the Senior Equipment Specialist in the United States Army Medical Materiel Agency, National Maintenance Program. In that role, he performed analytical studies for medical devices particularly focused on mean time between failures, safety recalls, and failure faults for delays in usage of medical devices. He also authored ISO 9001 work instructions and served as an internal auditor. Lenearo also performed analytical studies on the various Enterprise Resource Planning (ERP) systems in the DoD’s inventory and led the Army Reserves in changing their use of Army systems to provide accurate visibility in the business intelligence tools and repositories.

Lenearo is an Army Veteran where he has served as a Biomed and Network Administrator in various assignments to include one of the last general hospitals, medical centers, depots, and research universities. He is a native of Detroit, Michigan and holds a Master of Science in Information Systems with a concentration in Enterprise Resource Planning (ERP). He is also a trained facilitator in Appreciative Inquiry and Arbinger Institute. Lenearo is an active member of Alpha Phi Alpha Fraternity, Inc., St. Vincent DePaul Society, and Knights of Columbus.