After months in ICU battling COVID, Vet ready for next chapter 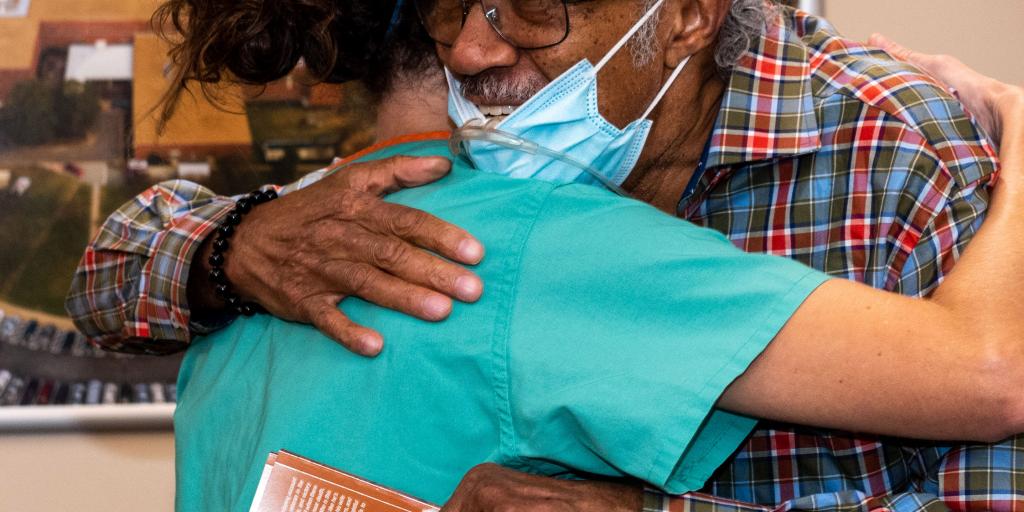 Ed Coleman, Vietnam Veteran, hugs a staff member from the Central Virginia VA Health Care System. Coleman spent about six months in the hospital in 2020 battling COVID. He came back to the hospital to celebrate his recovery with the staff who cared for him. (Photo by Jason Miller, Visual Information Specialist)
By David Hodge, Acting Public Affairs Officer
November 24, 2021

Ed called it. He said he would return to meet and thank the staff who cared for him. Although everyone hoped this would come true, the odds at times were stacked against him.

Yet, Ed Coleman’s return to the place he spent six months battling COVID-19 was, arguably, as therapeutic for the clinicians as it was for him and Charlene, his wife.

In late September, it finally happened. A small reunion at the Central Virginia VA Health Care System (CVHCS) in Richmond, gave staff who cared for Ed, and grew to know Charlene, the opportunity to celebrate his recovery.

“It was a completion of the circle,” Charlene explained. “He was happy to be able to thank the medical staff who helped save his life. It was an extremely uplifting experience, I believe, for the staff and for my husband.”

When Ed began to feel bad early in the pandemic, he tried to tough it out, a trait undoubtedly forged while serving with the 7th Special Forces Group in the Vietnam War. Ultimately, he reached a point where breathing became too difficult. It was at this time, they sought help at CVHCS.

At the height of his illness, Ed spent a six-week period in the intensive care unit in an induced coma, intubated and fighting a case of double pneumonia. Throughout the experience, Charlene visited him often and developed a relationship with several clinicians who cared for her husband.

“They were kind and considerate and did not seem to be bothered talking to me daily,” she recalled. “They treated Ed very well. The medical staff and Ed became friends. They made him feel that his well-being was important to them, and it was.”

One day, a physical therapist caring for Ed organized an opportunity for Charlene to see him. The therapist made a sign that read “I love you Charlene” and ensured Ed was waiting at his window.

“It had been quite some time since they’d seen one another, so it was a very special moment to witness,” said Rizelle Baul, an occupational therapist who cared for Ed.

Charlene, an author, kept notes throughout Ed’s stay. At the reunion, she donated a few dozen copies of her latest book, titled “Surviving COVID.” The book chronicles their experience while Ed was sick, at a time during the pandemic when effective treatments were unknown, and vaccines were unavailable.

“To see him walking unassisted and healthier brings the rehab process full circle for me and my peers,” Baul stated. “Opportunities like this don’t come often.”

Ed and Charlene have traveled extensively over the years, visiting parts of the Caribbean and Africa, taking their shared experience in the TV production industry to places few cameras had been before.

“Ed and I enjoy adventures,” Charlene stated. “We are not shy and usually approach new challenges with an anticipation of a positive outcome. This is why I knew Ed would live and survive COVID-19.”