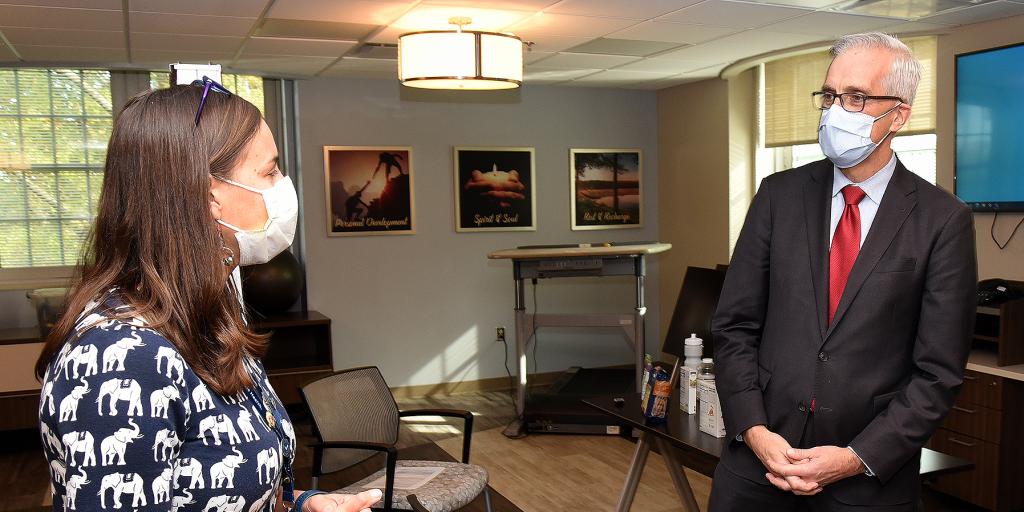 When the COVID pandemic first hit, a combat zone memory and a request for crackers led to a stress control model that Salisbury VA Health Care System has seen become an inspiration to other facilities.

It began when Army Veteran Dr. Marc Cooper, Mental Health Service chief at Salisbury VA, was sitting in a COVID planning meeting to discuss the increased capacity needed to handle an influx of patients.

“We were talking about different supplies that needed to be purchased when the chief of surgery asked if his staff could get crackers,” said Cooper. “He said it would be nice to have crackers for the staff to give them some sort of nourishment if they are working double shifts.”

Cooper had been envisioning beds in the hallways and being overrun with COVID patients, but that statement caused him to reflect on his military experience.

“It dawned on me that this was very similar to a combat zone,” he said. “This would be a great opportunity to essentially create the equivalent of a combat and operational stress control service—minus the combat.”

He’d participated in various planning meetings but when the surgical chief made that comment, it gave Cooper a new perspective.

“It brought in the human element of how this was going to affect staff at a personal level,” he said. “It sunk in that it’s really going to put a strain on them. What can we do to support their stress levels?”

So, Cooper put together a team comprised of staff from Mental Health, Social Work, Research, Employee Occupational Health, Whole Health, and Chaplain Service. Perhaps the most impactful aspect of Operational Stress Control (OSC) was the ability to communicate information quickly from the frontlines to the highest levels of leadership.

“During the height of the pandemic, we did surveys weekly and collected real time data—sort of a temperature check,” said Dr. Christina Vair, psychologist and Whole Health Director. “Leadership was able to act quickly so people felt they were being heard and their concerns met.”

Salisbury VA Director Joseph Vaughn met with OSC members often during the pandemic to get a sense of staff needs and particular areas that needed his attention.

“It was eye opening for sure,” said Vaughn. “As a director, you’re always putting out fires so to speak, and OSC certainly informed me of the areas with the most need.”

Staff experiencing stress could speak with trained staff and also were provided with opportunities to learn calming and relaxation techniques.

“We had to come up with ways to give people an opportunity to pause, whether that was a 15-minute mindfulness practice or giving them stress management resources,” said Vair. “And for the people who weren’t able to step away, it was important to show gratitude and appreciation so they still felt they were being recognized for their efforts.”

Salisbury VA Health Care System was the first facility in its network to implement this type of OSC model. It also was recognized by VA Secretary Denis McDonough during a recent visit.

Cooper, who does rounding in different service areas, has seen the effect of checking in with the workforce.

“Staff really valued being asked how they were doing,” said Cooper. “Even this long into the pandemic, we continue to see staff members showing appreciation because they’re being checked on.”

“It’s not easy working in health care even when there isn’t a pandemic,” said Vair. “It isn’t just pandemic-related stress—though that has been the fuel on the fire. When we stood up OSC, we did it with the intent of creating something that would be sustainable. The ideals of OSC are critical to good organizational health.”