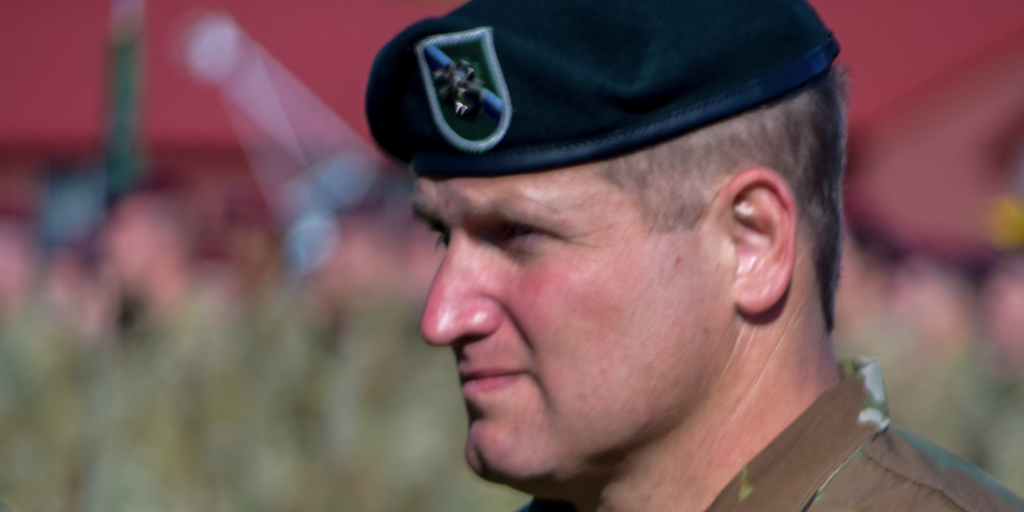 Everyone falls. Even heroes. Chris Hird learned that the hard way. So did the woman that saved him.

As a Special Forces commando, Hird was at the top of his game. He was well-respected, in a stable relationship, and had his act together.

Nothing could rattle him.

Deployed to Afghanistan in 2003, the mission was simple: remove a man from power. And by the end of it, a man was taken out.

The mission went south, and while under direct fire, a weapons cache exploded near Hird’s position. Shrapnel tore through his jaw, shattering it in two places.

“I woke up in the intensive care unit the next night and the doctor explained what was going on,” Hird said. “I looked and I couldn’t find anything on my face that looked familiar – until I got to my eyes.”

For hours, a team of surgeons labored to wire his jaw shut. Excessive dental work followed.

In pain for months, the distress wore on him.

“Being disfigured, not being able to recognize yourself in the mirror … I would pass people in the hallways and they would look away from me.”

Inside, he was the same Chris; the guy who liked riding bikes and playing with his dogs. But all he saw a monster.

So he became one.

While some would’ve called it quits, Hird continued serving.

But he wasn’t the same. While professionally, Hird kept up appearances, his personal life unraveled.

“I thought I was maintaining, performing the same and nobody could tell,” he said. “But it was obvious to everyone but me.”

As a Special Forces medic, Hird was trained to help people. But he didn’t know how to help himself.

The once clean-cut soldier turned to alcohol and painkillers. Drugs followed. Then lies and cover-ups.

“It was just a very dark period,” Hird said. “I was trying anything I could do to just kind of hide from it, numb it.”

In denial of his problem, Hird languished for three years until a run-in with the law forced him to face reality.

Other than a speeding ticket when he was 18, he had a stellar record. He was a guy people looked up to.

“That night sitting there being arrested, people were looking at me like that guy everyone hates,” Hird said. “I had never been the bad guy and now, I was the bad guy.”

The event marked a milestone for Hird. He quit drugs then and there.

But he still was unwell. And before he could do anything about it, Hird was ordered to the Philippines for operation Enduring Freedom.

Duty called. Treatment would have to wait.

In hindsight, the accident alone might not have brought Hird over the edge. A rough childhood in foster care had chipped his foundation.

But he had moved past all that.

Hird always knew he was going to serve in the military. It was just a matter of whether he’d be a SEAL or a Green Beret. That’s how put together he was.

When the accident happened, it shook him.

“Everyone has the stuff they deal with and they do fine,” Hird said. “Personally, the Afghanistan thing was too much, and I went off the rails a little bit.”

Having proven his worth in the Philippines, Hird continued the facade of normalcy.

But his family knew. So did those close to him.

“A lot of guys think, ‘I’ll know if it’s going on,’” Hird said. “I just kind of dealt with the issues. I wish I would’ve listened a little bit more to people are around me.”

For more than a decade, he limped on before seriously seeking help.

Entering treatment in 2019, Hird was surprised to learn he had it – an acronym casually thrown around in military circles.

PTSD. Everything made sense.

Untreated PTSD lasting more than a year doesn’t usually go away on its own.

For Veterans trying to cope, life can be taxing. And for some, the thought of treatment can be even scarier.

It doesn’t have to be that way, said VA clinical psychologist Dr. Erika Roberge.

“People worry that discussing painful experiences will be overwhelming and cause them to lose control,” she said. “But it’s actually worries like this that prolong the symptoms of PTSD. Avoidance of thinking, talking about, or even feeling emotions associated with trauma is what keeps people “stuck” in PTSD – it impedes their healing process.”

Roberge, who authored a recent study on PTSD, said evidence shows it can be conquered. More than 76 percent of Veterans who complete treatment show significant improvement in their PTSD symptoms, she said.

For Roberge, who comes from a military family, the cause is personal. She had researched PTSD in college, but after the sudden death of her father in 2012, she lived it.

Instead of letting it get the best of her, Roberge used that experience to help bring out the best in others. She focused her efforts on helping Veterans heal.

But the figures were staggering: nearly 20 percent of recently-active Veterans suffer from PTSD.

Undaunted, Roberge vowed to change that, even if it meant one Veteran at a time. She had to: because they’re not just any Veterans, they’re her Veterans.

Hird is one of her Veterans.

The hardest part of treatment – harder than any training he endured – was reopening old wounds and reliving memories that haunted him.

That’s when he left the Special Forces, the career he’d known and loved for 30 years. It was time for the Command Sgt. Maj. to focus on himself for once.

While many patients can finish PTSD treatment in as little as two weeks, Hird spent 15 months working through decades of trauma.

Treatment was “grueling,” he said.

But the effort was worth it.

“He showed up every week, Roberge said. “He pushed himself far outside of his comfort zone to allow himself to be vulnerable—something that his childhood and military career taught him he should never do. Chris is a great example of someone whose hard work and devotion to treatment allowed him to go from surviving to thriving.”

Ultimately, Hird made a full recovery. He credits that largely to, Roberge.

“I missed an appointment and she called me almost in tears – she cares that much, Hird said. “I’ve been really lucky with all my clinicians, but Erika, she was amazing just start to finish. She went the extra mile and was completely invested in me.”

Hird’s learned to deal with trauma and has found peace of mind. Now, back to seeing friends and doing the things he loves, he urged others to seek treatment.

“There’s still a little stigma in the military to get treatment,” he said. “But it’s not just for you; it’s for your family and your soldiers.”

The titanium plates in his jaw will always be there. As will the trauma he endured.

But Hird’s a new man now and with the perspective he’s gained, a better one.

“I will never be able to thank the VA enough for what they were able to do,” Hird said. “It’s like night and day difference.”

Everyone falls. But heroes get back up.

If you would like to learn more about PTSD or treatment options, visit: https://www.ptsd.va.gov/