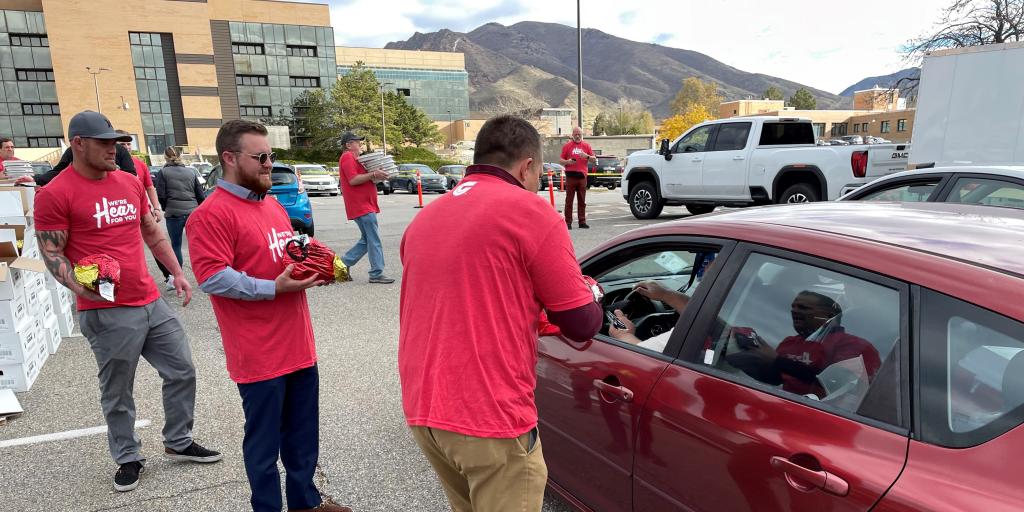 Ken Garff set up a drive-through meal giveaway in front of the building 9 on the campus of the George E. Wahlen VA Medical Center on November 12. Veterans started arriving up an hour early to get their free holiday meal, and by the time the event kicked off dozens of cars were in line.

Mike, a Veteran who served a combined 25 years in the Army and Navy was first in line. “It makes me feel good inside when a company steps up and gives back to Veterans like this,” Mike said.

As the Veterans drove up, Ken Garff employees handed them a ham, a pumpkin pie, and a bag of sides and fixings with stuffing, cranberry sauce, vegetables, potatoes, gravy, and jello.

“With food prices way up this year, this helps out a lot,” said Navy Veteran Roger, who was with his brother, Robert, an Army Veteran.

In all, Ken Garff employees gave away 500 dinners to Veterans and their families. This is the second year, they partnered with Voluntary Service to offer Thanksgiving meals to Veterans. Last year, they gave away 300 meals, and that was so successful, and employees enjoyed it so much that they wanted to do it again.

“We wanted to serve our Veterans and give back to those who have given so much to us. It is a beautiful opportunity for our employees to look a Veteran in the eye and thank them for their service,” said Kate Terry, marketing manager, Ken Garff Automotive.

If you are interested in partnering with VA Salt Lake City Voluntary Service or just volunteering, you can call Voluntary Service at  801-584-1241 or for more information head to https://www.va.gov/salt-lake-city-health-care/work-with-us/volunteer-or-donate/ .