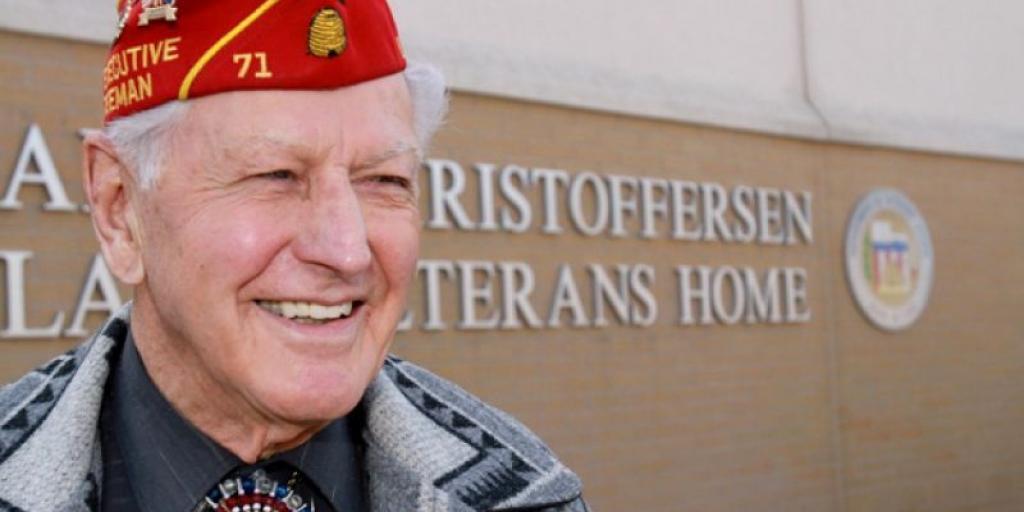 World War II Veteran and legionnaire William E. Christoffersen smiles in front of the state Veterans home that bears his name. Christoffersen fought for decades to bring a facility to Utah and got his wish when the state built its first Veterans home in 1998 (photo courtesy of The American Legion/Stephen Holt)).
By T.S. Jarmusz, Salt Lake City public affairs
June 5, 2020

Utah lost a hero this week. World War II Veteran and 75-year legionnaire William E. Christoffersen will always be remembered as a man who fought for his country and his fellow Veterans. It was his life’s mission.

“We’ve lost one of our greatest champions,” long-time friend former Utah Department of Veterans Affairs Executive Director Terry Schow said. “We lost a guy that was a beacon to many of us in the Veterans community. He was beloved.”

Christoffersen died Sunday at the state veterans home named in his honor. The Cache Valley native was just days shy of his 94th birthday.

“He was a great mentor, great advisor, and just a great man,” Schow said. “We will never see his likeness again.”

Having served as an Army infantryman who fought throughout the Philippines in WWII, Christoffersen returned home and founded a Logan-based construction business.

But his real calling, Schow said, was serving Veterans.

Soon after leaving the military, Christoffersen joined the American Legion. He was elected department commander in 1959.

A born leader and tireless advocate, Christoffersen was elected to the American Legion’s National Executive Committee – the highest state post within the Legion and part of its national board of directors – just four years later.

Soon, he made it his mission to bring a Veterans nursing home to Utah. But this mission would take decades.

He served 10 years as a committeeman before being elected to lead again in 1975. And this time, he would get his Veterans home.

The governor agreed, and Christoffersen got his wish. Utah’s first Veterans nursing home was completed in 1998.

But Christoffersen did more than bring a Veterans home to Utah. He brought three national conventions to the beehive state, and with them, roughly 10,000 visitors including dignitaries, senators, and in 2006, President George W. Bush.

“Bill was in fact, a legend,” Schow said. “No elected official at the federal level did not know Bill Christoffersen.”

Christoffersen used his clout to better Utah’s Veteran landscape. One of his initiatives even rose to the level of federal law.

He was one of the drivers for the Transition Assistance Program, which provides service members leaving the military with a weeklong course on how to create resumes, apply for benefits, and more, Schow said.

Christoffersen also pressed for a resolution to ban the desecration of the American flag. The bill, sponsored by Utah Sen. Orrin Hatch and supported by Bush himself, failed by one vote in the U.S. senate.

Even in his eighties, Christofferson continued advocating for Veterans. In March of 2013, he was honored when the facility he helped create was renamed the William E. Christofferson Salt Lake Veterans Home.

Having led the Legion for more than a half-century, Christofferson retired in August of 2013. Schow recalled how when Christoffersen departed, he apologized for not being able to do more.

"There are times when you ask, 'Is it worth it?'” Christoffersen then told the Legion. “I say yes, it is."

In tribute for his decades of service, the flags outside the William E. Christofferson Salt Lake Veterans Home flew at half-staff June 6 – in honor of Christofferson’s 94th birthday.