A Housekeeper with a Halo 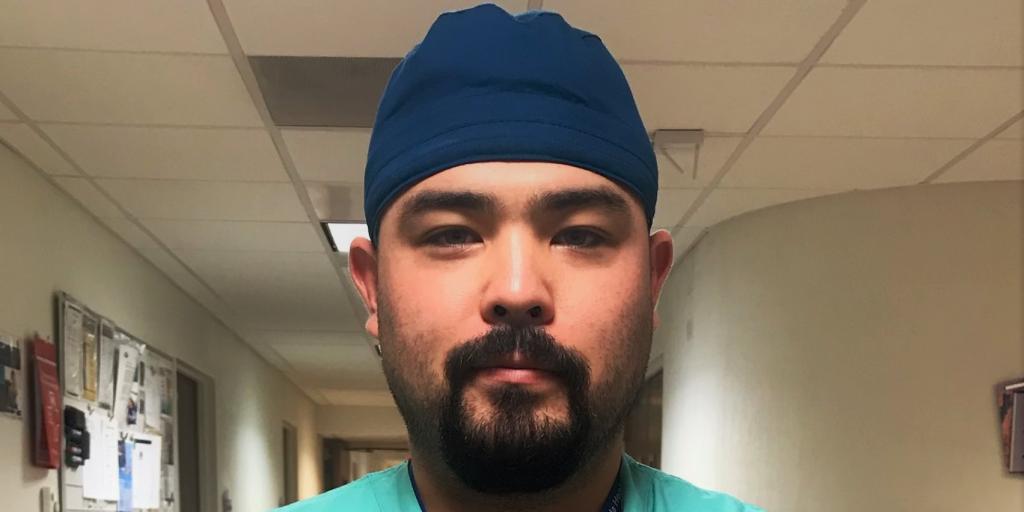 On March 26, 2020, Micah Van Dreumel received devastating news. He was to be medically discharged from the Marine Corps.

His immediate supervisors fought to retain him, they knew he didn’t want to be discharged, but in the end, Micah was sent home. At the time, Micah had been going through a harsh divorce and didn’t have a house to come home to. He asked a friend and fellow Veteran if he had space for him.

“It was this tiny mobile home. I was so embarrassed when I would bring my kid home and we would make a pallet on the floor out of blankets so we could sleep together. I felt like I had hit rock bottom. I had everything I needed in the Corps; meals, bed, shelter and a mission. When I deployed the last time, though, my wife had enough and left. My Marines and my kid were all I had left. I was literally eating green olives and canned chicken from the Dollar Tree,” Micah shared.

Faced with a new reality, Micah knew he needed employment. He applied to the Post Office and was accepted as a temporary COVID hire, working six days a week and pulling 16-hour shifts in the warehouse. In August of 2020, Micah began feeling under the weather. The plant manager ordered him to get a COVID-19 test and Micah knew that was going to cost money that he didn’t have. At a loss Micah wracked his brain before learning that he could receive a free test at VA Sierra Nevada Health Care System’s medical center.

“I walked into the VA hospital and they told me that I wasn’t on file. I admitted that I was nervous about getting my care at the VA because I had heard so many horror stories. They explained that I needed a provider and handed me a little blue phone. On the other end was a doctor who told me that they were now my provider and that I would be taken care of. It was incredible,” recalls Micah. “Apparently they had been trying to get ahold of me as part of an inbound program they do now. She asked me what my housing was like and if I was drinking or using (substances). I told her that I don’t use substances or drink. My housing situation wasn’t too good, but I was getting money from this job at the post office and planned to change that soon. Then she scheduled me for my first appointment at North Campus. The care was awesome, and the people were great.”

His new doctor told him that until he was evaluated, though, he couldn’t continue to lift heavy stuff and work long hours on his feet for fear of harming his back more. The doctor sent him back to the post office with a note stating he couldn’t work longer than eight-hour shifts for six days a week, nor could he lift more than forty pounds for 30 days. The plant manager, Michelle, responded with, “I need you to work at least 12 hours. We don’t make special accommodations for Veterans.” When Micah told the plant manager that he didn’t intend to go against his doctor’s orders and argued that he could still do his job effectively and that it was only for thirty days, he was reminded of his temporary status and released from duty.

Micah returned to the VA and explained what happened. He was sent to Hali Ward, who immediately asked for his resume. Within a week, Micah was a VA employee in Housekeeping where he settled in quickly by speaking to the Veteran patients during his shifts at night. “It doesn’t matter how old we are or the age difference between us, they are all family,” Micah said. Micah’s housekeeping and conversation were needed in the COVID unit and the Emergency Department.

Gary was an elderly patient in the COVID unit and fellow Marine. Micah made it a point to tell every patient hello and share words of encouragement, and Gary quickly formed a relationship with the 27-year-old housekeeper. The two shared stories from their service and laughed at Gary’s jokes and when Gary let it slip that he missed green tea, Micah got permission to bring some in for him. Micah remembers, “It was as if nothing was wrong while he sipped on that tea. He sat up straight and seemed like a new man.”

Only days later, Gary’s health began to decline drastically. He confided in Micah that he knew his time was coming to an end, and that he had four requests. Gary didn’t want to be alone, and he wanted to go on his own terms. He also asked Micah to tell his children that he loved them and to tell his wife that he went peacefully.

Micah called home and made arrangements for his grandmother to watch his children that evening and sat next to Gary’s bed, refusing to leave his side. They shared more stories and laughter until Gary was finally ready to “go”, pulling off his own oxygen mask and thanking Micah one last time.

Anita, an RN at the VA in the COVID unit, shared what she witnessed with tears in her eyes. “I thanked Micah many times for his compassion for this very special patient and he would always say it was nothing, that Veterans look after each other. He was modest and would never take the compliment that he so deserved. In my many 35 plus years of nursing this has affected me and stood out to me as I have witnessed something so special and met someone so caring. I am just overwhelmed with gratitude that my patient had this special person in their life. I had the opportunity to see Gary’s daughters in the ED and they shared that they were very grateful as well.”

Micah was awarded an ICARE award for going above and beyond the call of duty, but Micah doesn’t see it that way. “We are family. No matter what we are going through, we are Veterans, and we are family. Veterans are who we serve here, and this is what they deserve. This is how I would want to be treated. This is the kind of care I would want. For me, it’s not going above and beyond the call of duty, it’s doing what I’m supposed to be doing and what all of us should be doing,” he shared.

Only days later, Micah went to Gary’s funeral and met with his wife and daughters, fulfilling a promise he made to his fellow Marine. That evening, he was back at work whispering words of encouragement with the other Veterans in the COVID unit.

Two Marines, one old and one young, who only knew each other for two weeks, yet shared a lifetime of memories. Micah insists that Gary changed his life, but it would appear this humble housekeeper was consistently put on a path to end up by Gary’s side in his last days. The COVID unit at VA Sierra Nevada Health Care System has a guardian angel dressed in scrubs. A housekeeper with a halo.