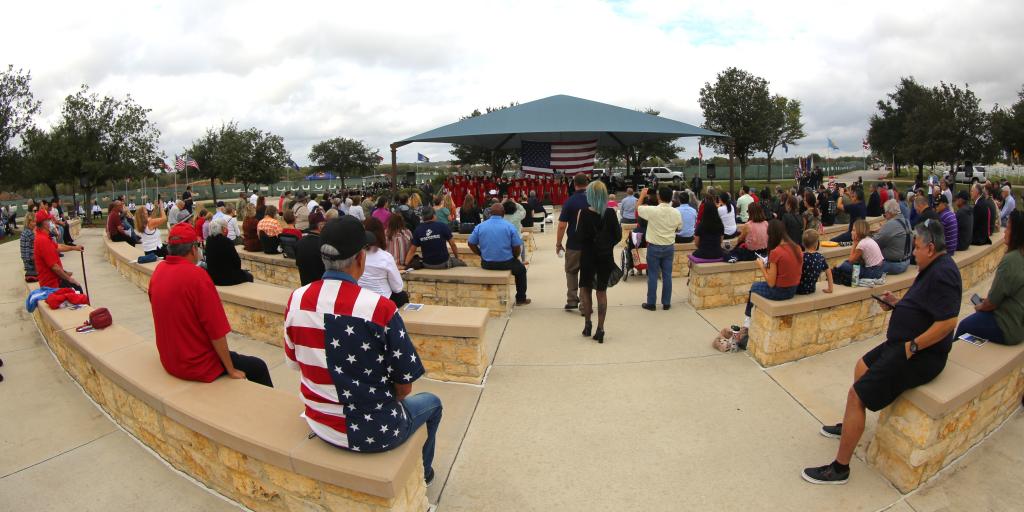 Veterans, families, caregivers and even active-duty military members wait for the beginning of the 2022 Veterans Day Ceremony to begin at the Ft. Sam Houston National Cemetery.
By Steven Goetsch, Public Affairs Specialist
November 11, 2022

It was another typically large crowd that showed up to salute Veterans on Veterans Day, November 11, 2022 at the Ft. Sam Ceremonial grounds. They were diverse in age, service, experience or even color, sporting red, white and blue or their respective service uniform.

Unity was in purpose: to salute the Nation’s Veterans…all 19 million of them.

Keynote speaker for the ceremony, Joseph Bray, Civilian Aide to the Secretary of the Army, Texas South, localized this a bit and asked all members of the audience who were Veterans to stand and be recognized.

Bray said those 19 million, in a nation of 330 million, represents approximately seven percent of adults in the U.S. Bray also said it is important to celebrate what these patriots do after they take the uniform off. “We don’t hear very much about our Veterans after they serve,” Bray said. “In many cases, their deeds and accomplishments truly show how much character, integrity, determination and devotion to family, community and country these patriots have,” Bray said.

One of those Veterans is Navy Veteran Pedro Lila Torres who dedicates himself to maintaining the Ruiz-Herrera Cemetery and became a member of the new American Legion in Von Ormy, loves events like this because it brings Veterans closer together.

“We had a collision at sea in May of 1967, and after all these years, I met a man that was on the ship that rammed us,” Torres said. He was at an event, and after everyone was addressing a man named Terry as “chief” he found out he too, was in the Navy and went to Vietnam. “We started talking and when I told him I was on the U.S.S. Taluga, he asked me, ‘were you on it the day the U.S.S. Navasota rammed it,’” Torres said laughing. Both Veterans got a kick out of the sheer coincidence of their meeting.

Meeting up with fellow Veterans can be a draw for Veterans Day activities, but for some it is just showing your community your pride and gratitude. Retired Air Force Chief Master Sgt. John Riojas arrived at the ceremony in full dress blues. Riojas took to heart what an old boss said to him after his active-duty career. “When I retired and went to work at Bergstrom, there was this colonel who said, chief, you’ll never take the uniform off,” Riojas said. Although probably not speaking in the literal sense, in addition to living his life with the character traits Bray spoke of, Riojas had a sense of pride that not only kept the uniform looking sharp, but also enabled it to fit just like the last day he wore it on active duty.

Before the master of ceremonies handed the mic off to Graham Wright III, Assistant Director of the Ft. Sam Houston National Cemetery, he provided a very important, but often forgotten message on this day, and many others. “I believe there are two categories of individuals that play an important role in a Veteran’s life,” John Francis, the Master of Ceremony, said “Those are the spouses and the children of a Veteran,” he added. He asked them to stand and be recognized for their dedication and loyalty.

Wright opened citing a few examples of extraordinary perseverance. He talked about the obligation of the VA and the nation, to honor them always. “For Veterans like Haynes and Peck, and so many like them, their wars did not end with the wars in which they fought,” Wright said. “Instead, their wars moved on in the minds and bodies, in scars both physical and invisible. So today we recommit to honoring America’s Veterans like them,” Wright said.

But just as Wright called us to be thankful, so too do many Veterans believe they are thankful to have had the opportunity to serve the country they love so much.

“To me, I owe this country so much,” said Riojas, getting emotional as he tried explaining how to best thank a Veteran for their service. “People ask me when we came home [from Vietnam], and the welcome we got, I look at it as a time in history, and it actually ended up bonding us Veterans,” Riojas said.

Torres also has many bonds, some of those are buried at Ft. Sam. “You know I hear songs play on the local radio at that time, and it makes me remember my one partner that is right over here in section 45,” Torres explained. “This man, he was one of my boot camp buddies and we lived together for 12 weeks,” Torres said.

Because the military lines you up alphabetically, his friend and fellow Veteran who was also a Torres, throughout bootcamp, where one Torres was, the other was not far behind.

Both went off to serve in Vietnam in 1966. Both returned home, and 20 years later, at a pizza parlor, barely recognizable under a cowboy hat and sunglasses, the reunion took place.

Torres was especially grateful to be back home and have a chance to even meet his old friend because he went on to do three more tours in Vietnam.

Another Veteran buddy Torres visits at Ft. Sam hits a little closer to home because he is family. “My cousin, Sammy Rodriguez, flew on helicopters in Vietnam and is buried in section V,” Torres said. “He was 19 days from his 19th birthday.”

Torres makes his rounds every Veterans Day, making sure to honor all of the Veterans in his life.

Wright said the VA honors Veterans by providing them world-class healthcare, but also charged the audience that this action falls on every American.

“Veterans Day is our sacred responsibility as Americans to serve those who have served our country,” Wright said. “We are reminded that our Nation’s most sacred obligation is to prepare and equip the troops we send into harm’s way, and to take care of them when they return home,” Wright said.