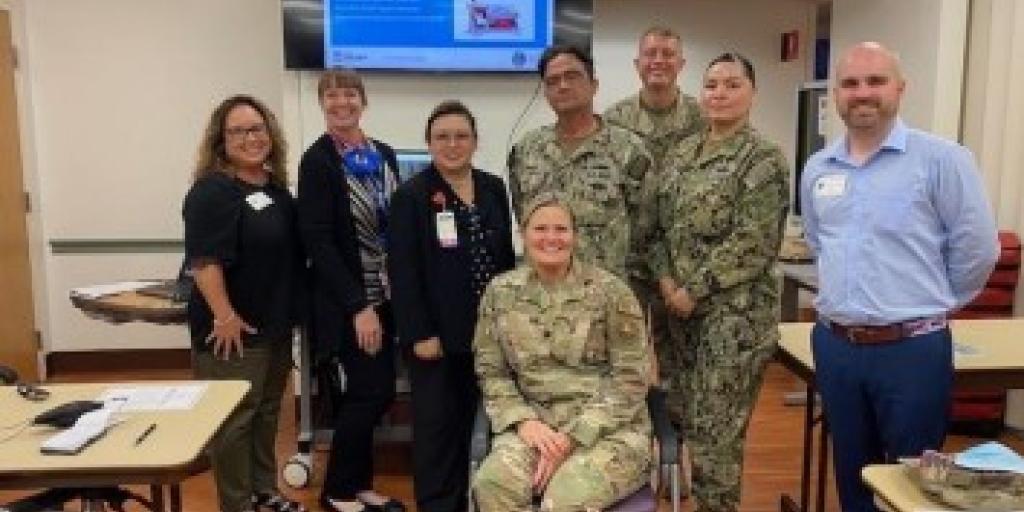 The South Texas Veterans Health Care Systems (STVHCS) Simulation Center participated in Healthcare Simulation Week by celebrating the health care simulation field and the professionals that work in it.

On Monday, September 12, the simulation team held a luncheon, which honored simulation faculty, subject matter experts and educators. “The luncheon was a celebration of our faculty and supporters of simulation. We couldn’t run a successful program without their continued support and expertise,” remarked Debra Bartoshevich, simulation director of STVHCS Simulation Center.

On Tuesday, September 13, SVTHCS had an open house, which showcased simulation equipment. This was an opportunity to highlight the simulation program, answer any questions and field suggestions. One medical resident who visited the event said, “I didn’t realize that there were so many task trainers for skills.” The event was also open to Veterans and their families, and one of the most popular areas for Veterans was the “Stop the Bleed” station. The station allowed Veterans to practice placing tourniquets on simulated bleeding limbs in order to stop the limb from bleeding.

On Wednesday, September 14, the STVHCS Simulation Center hosted “Sim Wars,” which was a fun competition between units on the quality of their CPR. Judy Miller, senior impact manager and Scott Hunter, RQI partners impact manager from the American Heart Association Resuscitation Quality Improvement (RQI) attended the event. Mr. Hunter introduced a portable CPR unit for the staff to use. The winning unit in the “Sim Wars” competition was treated to pizza for all shifts to enjoy.

On Thursday, September 15, the STVHCS Simulation Center had an opportunity to showcase their RQI program by inviting the Military Training Network (MTN) team from the Department of Defense (DoD). USAF Lt. Col. Anne Staley brought her team to the STVHCS Simulation Center to see RQI in action. Sui Unzelman, STVHCS REdI AHA BLS/ACLS program director developed an agenda with speakers including the RQI partners Judy Miller and Scott Hunter and included touring units that have voice assisted manikin (VAM) stations. The DoD MTN team was able to do hands-on practice on the VAM. Dr. Sui Unzelman stated, “We are delighted to have the DoD MTN team here at STVHCS to showcase our best Picture (from left): Debra Bartoshevich, Simulation Director, Dr. Irene Silvernail, Director of RNTTP Program, and Erline Crisostomo, Critical Care Nurse Educator practices on resuscitation education and using simulation through RQI to maintain CPR competency in the staff to promote positive patient outcomes in cardiac arrest situations.”

To wrap up simulation week, on September 16, the STVHCS Simulation Center hosted an escape room called Mix-up at the Morgue. Staff had 15 minutes to identify the names of five bodies at a simulated morgue. The staff had to go through clues to figure out the names and tag the bodies correctly. The learners worked in teams, and the team with the fastest times won. The lesson provided a good opportunity to collaborate and work on teambuilding while having fun.

Over 300 people took part in the Healthcare Simulation Week celebration, including Dr. Bonnie Haupt, associate director for Clinical Training and Engagement for SimLEARN. Dr. Haupt stated, “The team’s enthusiasm and passion were evident over the weeklong event. I am very impressed by the STVHCS simulation teams’ dedication to improving Veteran and staff outcomes through simulation education. Their attention to HRO (High Reliability Organization) concepts and commitment as a SimLEARN intermediate facility certification site, SLICE network member and SSH (Society for Simulation in Healthcare) provisional accreditation of health care programs are not only recognized at the local level, but also at the national one.”