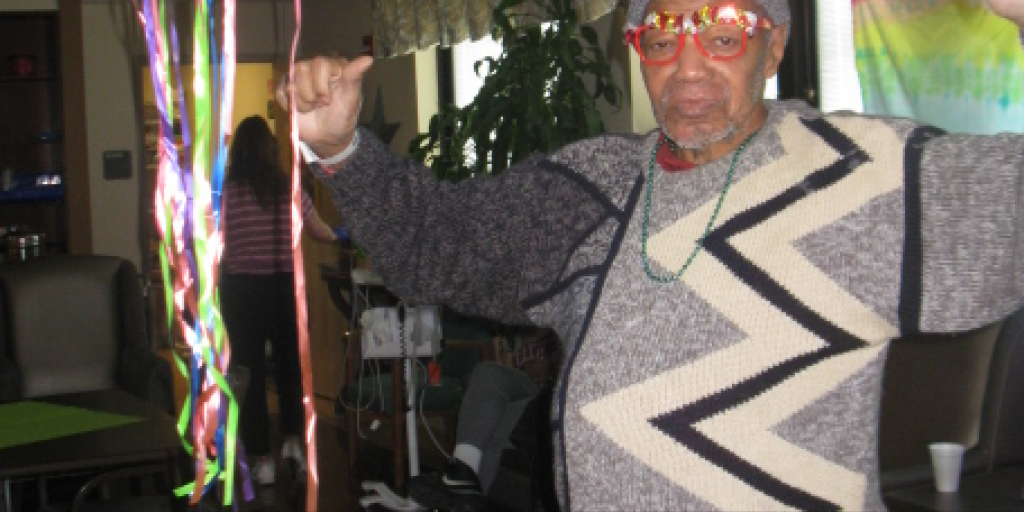 The 68-year-old Veteran, a resident at the TVHS community living center (CLC), danced and discoed safely with his fellow CLC residents and nurses while maintaining social distancing guidelines.

Snell collaborated with CLC nurses to ensure Veterans and staff maintained at least six feet apart. Additionally, only six Veterans were allowed into the main lobby at a time where they could safely disco.

“We implemented a strategic approach to ensure the safety of all CLC residents and staff,” said Karla Mages, TVHS registered nurse and recreation therapy supervisor. “We rotated the groups of Veterans to reduce any risk of exposure, and Veterans and staff conducted proper hand sanitizing before and after entering the disco room. Tables, chairs, and other high-touch surfaces were sanitized before and after each group’s disco as well.”

For many residents, the social distancing disco gave them a feeling of nostalgia and talked about their times as a young service man.

“I used to go dancing downtown all the time when I was younger,” said Army Veteran Julius Taylor. “I had the best time ever today. It felt great to show off my dancing skills at 81.”

The CLC staff said the disco had several positive effects on the residents. Veterans reported having a better mood, increased physical stability, and felt a sense of community.

“By dancing, Veterans can really express themselves by moving to the music’s rhythm,” said Mages. “Dancing builds social connections and has a profound impact on physical, mental, and social qualities.”

Mages said the best part of the disco was seeing Veterans smile and laugh during the event.

“The Veterans here mean the world to us,” said Mages. “We all felt close and together again in that moment, even in times of social distancing.”