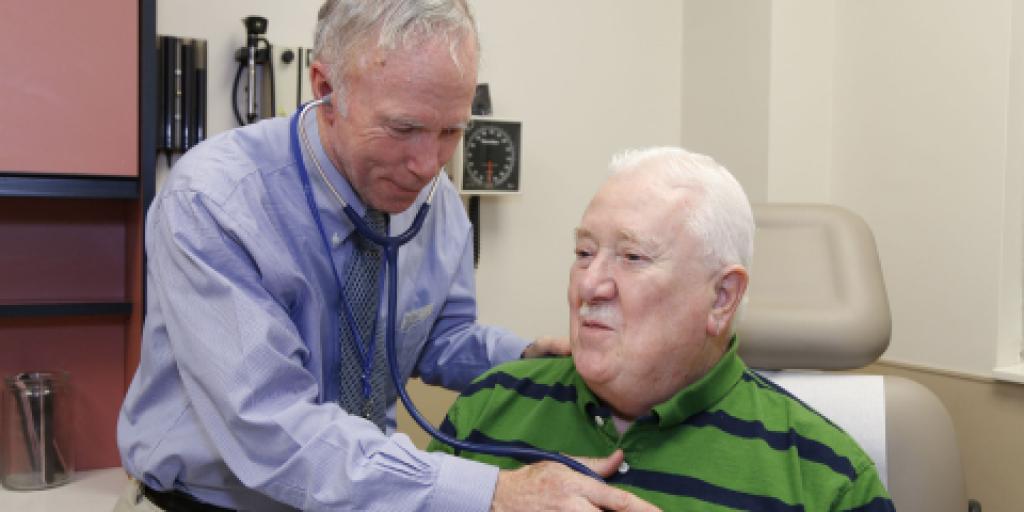 When Dr. Daniel Birchmore learned he was the recipient of the Veterans Health Administration’s most prestigious award he thought, ‘Why me?’

“Dr. Brian Christman told me I was selected, and I didn’t quite believe him,” Birchmore said. “When he told me I thought, ‘There’s no way. I’m not as good as the other nominees.’”

Birchmore has been providing care to Veterans at TVHS for more than 20 years. In addition to his work at TVHS, Birchmore serves as an assistant professor in Vanderbilt University’s Division of Rheumatology and Immunology and assists in teaching the Geriatric Medicine Fellowship Program.

When Birchmore arrived at TVHS from the Elsmere VA in 1997 he diligently split his time serving as a primary care provider, triage attending, medical ward attending, and rheumatology provider. According to his nomination packet, Birchmore has been instrumental in improving immunization rates at TVHS and is a four-time recipient of the Hugh J. Morgan M.D. Teaching Award for the Vanderbilt Medical Center, receiving the award in 2007, 2011, 2015, and 2019.

“Dr. Birchmore has a unique combination of keen intellect, compassion for patients, teaching ability, and work ethic that make him the ideal physician,” said Christman, TVHS chief of medicine and vice-chair for clinical affairs for Vanderbilt Department of Medicine. “Our faculty, learners and patients are fortunate to have him in our midst.”

“His level of commitment is unwavering,” Vedral-Baron said, “He has been instrumental in encouraging clinical communications and fields most rheumatology and medicine patient care calls providing a model for all to emulate.”

Birchmore is from Athens, Georgia and received his medical degree from the Medical College of Georgia. He completed his residency in internal medicine at Vanderbilt University and rheumatology fellowship at University of Virginia. Every year he requests to be on service at the VA for the first two weeks of July because he loves working with new interns and welcoming them to Vanderbilt.

Prior to his start in medicine, Birchmore competed on the University of Georgia men’s tennis team. He was inducted into the Georgia Tennis Hall of Fame in 2011. When he is not serving patients and teaching students, he can almost always be found on the Vanderbilt tennis courts.

He also enjoys creative writing and is the faculty sponsor for the Vanderbilt Literature, Arts, and Medicine student organization.