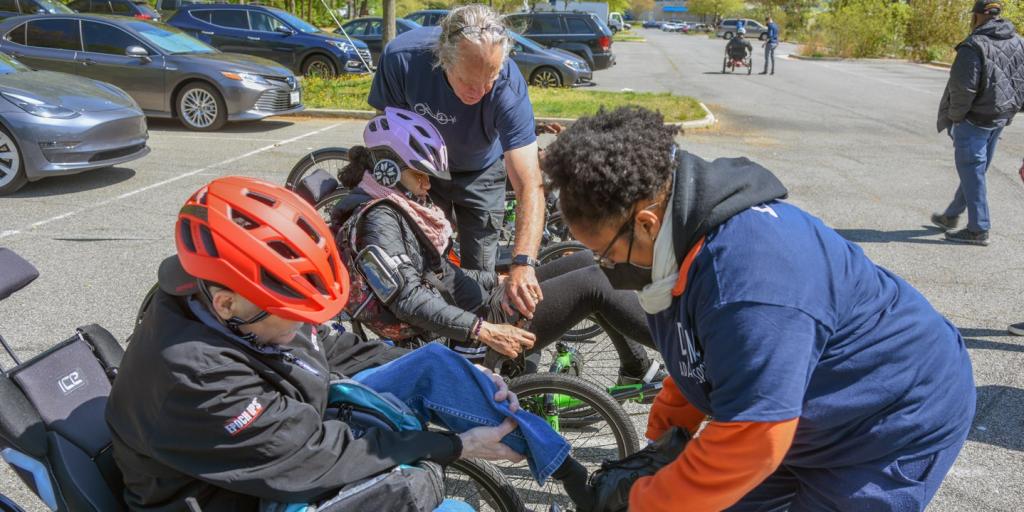 Retired Command Sgt. Maj. Clarence Davis has a passion for running. With more than 20 years as a Soldier, his body has carried him through countless miles of ruck marches and more than 12 combat deployments, with plenty of injuries along the way.

So, when his VA primary care provider told him that his running days were over, Clarence struggled to come to terms with that loss.

“Once you’re a runner, you’re always a runner so it did something to me when my doctors said, ‘no more.’ I don’t like treadmills, ellipticals or stationary bikes. And I was anti-cycling for a while, until I got to the point where I had no other options,” said Clarence.

With his physical therapist’s encouragement, Clarence attended an Adaptive Cycling Clinic hosted by the Washington DC VA Medical Center on April 28. The event offered Veterans with different disabilities an opportunity to test out adaptive upright bikes, recumbent trikes, and hand cycles. Clarence started on an upright bike because he was familiar with them, but the volunteers motivated him to try them all.

“I fell in love with the recumbent trike, and I did not get off it for the rest of the event!” he said. “I’m already working with Niketia to get my own so I can keep riding.”

Niketia Davis is the Adaptive Sports Recreation Therapist who helped to coordinate the event. She works with Veterans, who show a commitment to adaptive sports, to get a variety of equipment for Veterans to use as part of VA programs. She is passionate about helping Veterans find new ways to stay physically and socially active.

“In my work, I find so many Veterans who have been isolated because their lives and activities change due to their disabilities,” said Niketia. “But it doesn’t matter your level of disability, we are going to find a way for you to be able to get out and get involved and enjoy those things that you used to do prior to your injury.”

Niketia and her VA recreation therapy teammates worked with Washington DC’s District Cycles and Power On Cycling from Tennessee, to put on the clinic which gave 17 Veterans with different disabilities new ways to get out and socialize again.

“The most satisfying thing for me is to see a Veteran, who is an amputee, find a cycle that allows them to still participate with their families,” said Niketia. “I love it when a Veteran says an experience has been lifechanging. That’s the whole purpose of what we do.”

The VA’s Adaptive Cycling Clinic, held in Rock Creek Park, was life-changing for Clarence, as it opened his eyes to a whole new way of looking at things and connected him with a network of relatable peers.

“This isn’t the same as physical therapy, but it’s so good for my mind, body and soul to just laugh and joke and breathe, outside of the standard clinical setting, with Veterans who can understand what I’m going through. And all of that only happened because I was willing to try something new,” he said.

The Veterans in attendance spent a few hours being fitted for gear and testing all the cycles before having lunch. But even after the event ended, Clarence and several others stuck around another hour to converse and exchange telephone numbers. By meeting so many people who were willing to help him, Clarence realized he can help others too, and the Retired Command Sergeant Major stepped up to lead again by sharing his story.

“This is only my first event but already I want to share it with the world because I want every Veteran who is hesitant or has given up on physical activity to know that there are options for you. They have something for everyone, you just have to set aside your pride and try. You have nothing to lose but everything to gain.”