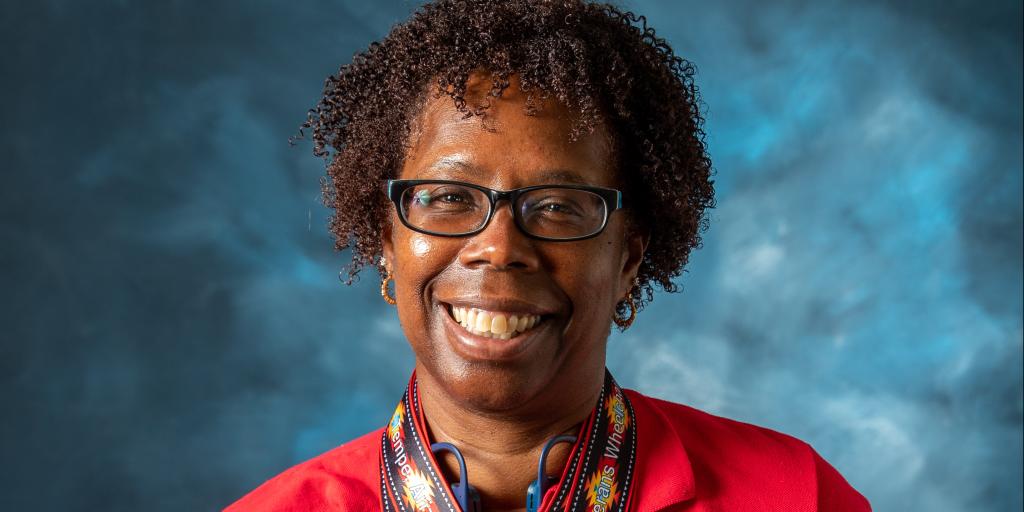 Wilmington, Del. – Crystal Young-Terrell, a Volunteer at Wilmington VA Medical Center, suffered from injuries while serving in the Army and continues to inspire through competition.

Adversity hasn’t slowed her competitive spirit. Terrell said she surprised herself when attending the 2022 National Veterans Wheelchair Games because in 2021 due to the COVID-19 all training leading to the event was held virtually.

“At the games I tried adaptive fitness, and I didn’t realize I had to bench-press first,” Terrell said while laughing. “I was like look guys, I haven’t bench-pressed since I was in high school when I was running track and field, but I started out real slow and managed to lift 65lbs.”

“I’m not competitive against others, I can pretend but it’s all in fun, Terrell said “to tell you the truth I didn’t care about winning the medals, it was more about learning where I was physically.” Terrell shared attending the competition is more about being inspired by other Veterans and looking at how far she has come.

“It feels like we’re family out there, always cheering each other on no matter what. Even if you’re my competition, I’m still going to cheer you on.”

Even though the National Veterans Wheelchair Games are the world’s largest annual wheelchair sports event solely for Military Veterans, there are still very few females who compete. Terrell uses each opportunity at the games to show females they too can compete.

“I just want to say, no matter what injuries you have, no matter your situation, you can do this! Sometimes this helps us mentally because we see ourselves as lessor because of our injuries or not being worthy. We are worthy, and we can do this.”

It is her hope that more females will join in the years ahead. She feels that once they find out they can do it, they might learn how much more they are capable of.

“We limit ourselves only because we choose to and I believe if we just try, we will excel at something we love, and you take that back with you because it empowers you to keep going,” said Terrell.

Terrell was approached by her physical therapist in 2014 who suggested she give it a try. To her surprise, she attended the games in 2014 without training and enjoyed the competition.

“I felt free that first time I found out I could actually ride a bike that is built for me. It made me free… not the turtle going slow – I could do this,” said Terrell.

When Terrell interacts with other Veterans at the Medical Center, she often asks them about their athletic history and what they are passionate about to see if there is interest in participating in the games. She shares her story to help raise awareness of the program, stating “just because you’re in a wheelchair doesn’t mean you can’t compete.”

For the games, athletes come from nearly every generation of veterans, from World War II to the most recent conflicts in Iraq and Afghanistan. From newly injured first-time competitors to Paralympic athletes, each veteran brings his or her own unique story of recovery through strength and perseverance.

It’s like a family, with all the volunteers, caregivers, the athletes there.

Terrell is sincere in thanking her coaches, competitors and supporters that continuously encourage her and have a positive mindset. “It’s been one of the best experiences for me, and plus I get to travel to places I haven’t been before to experience different cultures and mingling with other people while sometimes meeting celebrities,” Terrell said with a grin. Every year there are also exhibition games for the Veterans to try out to see if they like them, and this year curling was one of the sports offered.

“I realized I could do that,” Terrell said. “My upper body is strong enough that I can send that sucker down the ice, and I like the physical sports so anything that requires me to be more physical I just fall in love with.”

Terrell's smile lit up the room when talking about how all the positive energy around these competitions makes her eager to go on to the next one.

“Just be you and find something you like to do and maybe you will inspire someone else, it doesn’t matter what our limits are it only matters in our mind that we can do it. Practice makes perfect, but you have to be willing the put in the work.”

The Wheelchair Games is open to all U.S. Veterans with spinal cord injuries, amputations, multiple sclerosis, or other central neurological conditions who require a wheelchair for athletic competition. Every year, hundreds of American heroes from World War II, the Korean War, the Vietnam War, the Gulf War, and the post-9/11 era compete in this celebration of courage and camaraderie.

For more information on the games visit, https://wheelchairgames.org/