VA Advisory Committee Manager
VA Center for Women Veterans - Center for Women Veterans (CWV)
skip to page content
Attention A T users. To access the combo box on this page please perform the following steps. 1. Press the alt key and then the down arrow. 2. Use the up and down arrows to navigate this combo box. 3. Press enter on the item you wish to view. This will take you to the page listed.
Menu
Menu 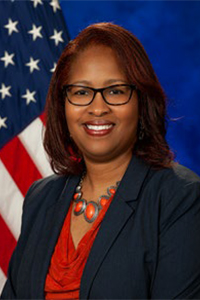 Ms. Middleton has diligently supported the Center’s mission and initiatives in service to women Veterans, since 2007. As committee manager and alternate designated Federal officer for the Department of Veterans Affairs’ (VA) Advisory Committee on Women Veterans, she is responsible for managing the committee’s Congressional-mandated and VA-mandated activities. She is also responsible for various duties promoting the Center’s efforts to monitor VA’s administration of benefits, services, and policies for women Veterans.

Ms. Middleton served as an intelligence specialist in the United States Navy, from 1997-2001. She was stationed at the Joint Warfare Analysis Center (JWAC) in Dahlgren, VA, where she was responsible for briefing intelligence teams and ensuring that network analyst received the most current information on their respective areas of responsibility.

Ms. Middleton earned a bachelor of arts degree in political science from Morgan State University and a master of science degree in psychology/social psychology from Walden University. She continues her service to the women in her community, through membership in her church’s women’s ministry and membership in Delta Sigma Theta Sorority, Incorporated.